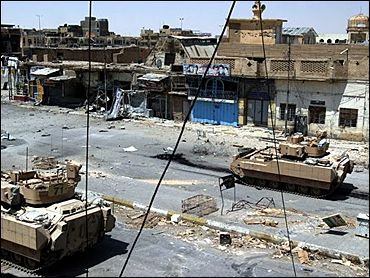 An aide to radical cleric Muqtada al-Sadr appealed for talks to resolve the standoff in the holy city of Najaf, which the Iraqi interim government has warned may end violently and very soon.

"We are ready to negotiate to end this crisis and the suffering of our persecuted people ... but this government doesn't want negotiations," said Sheik Ali Smeisim, a senior al-Sadr aide.

The government has repeatedly rejected talk. As U.S. and Iraqi forces battled, Iraq's government warned earlier Tuesday that al-Sadr's fighters "they have hours to surrender" in their weeks-long standoff inside the Imam Ali Shrine or face attack.

It was the toughest warning yet from the Iraqi government to Shiite rebels, reports CBS News Correspondent Elaine Cobbe: Throw down your weapons or be wiped out tonight.

In the southern city of Basra, Shiite militiamen took to the streets to support the Najaf insurgents.