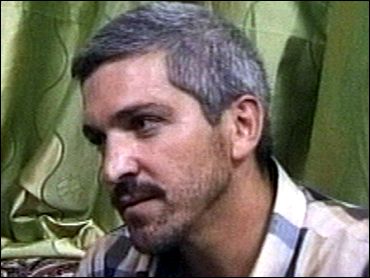 Hours after being freed by kidnappers who threatened to kill him, U.S. journalist Micah Garen said he hoped to stay in Iraq to continue working on a documentary project he'd started about the looting of archaeological sites.

"This experience hasn't made me want to leave at all," Garen said late Sunday in an interview with Associated Press Television News in the southern city of Nasiriyah.

The 36-year-old New Yorker was kidnapped Aug. 13 in Nasiriyah along with his Iraqi translator, Amir Doushi. The two were released Sunday after representatives of rebel Shiite cleric Muqtada al-Sadr intervened.

Al-Sadr officials delivered Garen to an Italian military base in Nasiriyah late Sunday. He was subsequently handed over to U.S. authorities, an Italian official said on condition of anonymity.

On Monday, U.S. Embassy spokesman Bob Callahan said Garen "remains in Iraq but I cannot tell you where."

APTN footage showed Garen in apparently good health, drinking soda on a couch next to Sheik Aws al-Khafaji, an al-Sadr aide in Nasiriyah.

"I'd like to thank the Sadr office for its work in helping secure my release and I'm very happy to be free," Garen told APTN. "I'm very happy that this is resolved."

"I feel like I have lots and lots of friends here and I hope that I can continue to work here," Garen said.

On Thursday, the kidnappers released a video of Garen surrounded by armed, masked gunmen and threatened to kill him if U.S. troops did not leave Najaf in 48 hours. U.S. forces have battled al-Sadr's militia in Najaf for more than two weeks.

Police said the two were abducted in a Nasiriyah market when two armed men in civilian clothes seized them.

Speaking to the pan-Arab Al-Jazeera television station on Sunday, Garen said he had been taking pictures with a small camera when a misunderstanding happened with people who did not approve. He did not elaborate.

"The kidnappers listened to the call that we made during Friday prayers, and they contacted us and we asked them to bring him to (al-Sadr's) office and promised that no one would pursue them," al-Khafaji said Sunday night.

Garen was working on a story about the looting of archaeological sites in Iraq when he was abducted, said his fiancee, Marie-Helene Carleton.

Garen works for Four Corners media, identified on its Web site as a "documentary organization working in still photography, video and print media."

Scores of foreigners have been kidnapped in recent months by insurgents and criminal gangs seeking to extort ransom or with the political motive of trying to force foreign troops and companies to leave the country.