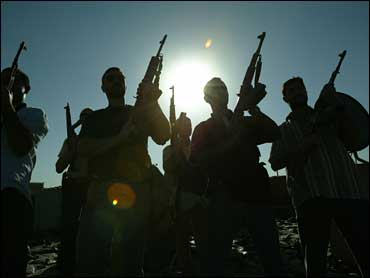 Iraq's prime minister on Wednesday disputed Blackwater USA's version of a weekend shooting that left at least 11 people dead and declared he would not tolerate "the killing of our citizens in cold blood."

Land travel by U.S. diplomats and other civilian officials outside the fortified Green Zone remained suspended for a second day after Iraqi authorities ordered Blackwater to stop working as an investigation continues into the Sunday incident.

The Moyock, North Carolina-based firm is the main provider of bodyguards and armed escorts for American government civilian employees in Iraq.

U.S. Embassy spokeswoman Mirembe Nantongo said the contractors involved in the shooting are still in Iraq, but she refused to comment on the specifics of the case pending an investigation.

Americans and Iraqis have offered widely differing accounts of the Sunday incident, with Blackwater insisting that its guards returned fire against armed insurgents who were threatening American diplomats.

The New York Times reported late Tuesday that a preliminary review by Iraq's Ministry of Interior found that Blackwater security guards fired at a car when it did not heed a policeman's call to stop, killing a couple and their infant.

According to the story on the Times' Web site, the report said that Blackwater helicopters also had fired - a finding the company denies. The Iraqi Ministry of Defense said that 20 Iraqis were killed, considerably higher than the 11 dead reported before.

Prime Minister Nouri al-Maliki said the Sunday shooting was "the seventh of its kind" involving Blackwater "and these violations should be dealt with."

"We will not tolerate the killing of our citizens in cold blood," al-Maliki said. "The work of this company has been stopped in order to know the reasons."

Al-Maliki said Blackwater's version of the events "is not accurate" and that U.S. diplomats could use the services of other security companies.

"Our information is that there was a violation,"' he said. "We moved to form a committee to reveal to the world whether those killed were armed or innocent."

He said Blackwater "should be held accountable for such a violation."

A government official, speaking on condition of anonymity because he was not authorized to release the information, said the convoy's guards started shooting and throwing stun grenades after they were stuck in a traffic jam.

Witnesses also said Blackwater guards opened fire on the crowd without apparent provocation. But the witnesses offered conflicting details and their accounts could not be independently confirmed.

U.S. State Department spokesman Tom Casey said Wednesday that a joint U.S.-Iraqi commission will be formed to investigate the incident.

"There have been a number of questions that have been raised and we want to make sure that both we and the Iraqis have a common set of facts that we're working from and also that we can hopefully come to some common conclusions on how to proceed," he said.

The status of Blackwater, one of three private security companies that provide protection for U.S. diplomats in Iraq, remained unclear on Wednesday, despite Iraqi government statements that the firm's operating license had been suspended.

A government official said initial findings indicated the security guards began shooting and throwing stun grenades to get the convoy out of a traffic jam. Some passers-by were struck by the bullets and he said a couple and their infant were killed.

But an official in Yarmouk Hospital said the infant had been only injured. Both spoke on condition of anonymity because they weren't authorized to release the information.

U.S. officials said earlier this week the motorcade was traveling through Nisoor Square on the way back to the Green Zone when the car bomb exploded, followed by volleys of small-arms fire that disabled one of the vehicles.

Hairdresser Suhad Mirza, 29, was working in her salon about 250 meters from Nisoor Square when she heard sirens.

"The sounds attracted my attention so I went outside the shop to see a convoy of SUVs with security guards shooting randomly at the people at low level. We were surprised by this and we rushed inside our shops to avoid random bullets," she said.

"Apparently, the guards wanted to make their way through the traffic jam made by Iraqi army checkpoint. There was no provocation and the guards were using their ammunition to move quicker in the street. Minutes later, the ambulances arrived to up the wounded and dead."

Imad Mansour Abid, 35, said he heard a loud explosion, which was followed by heavy gunfire from his office in a nearby area.

"Several SUVs were passing from Nisoor Square heading to Mansour when an explosion took place," he said. "This was followed by heavy gunfire opened by guards of the security vehicles. Gunfire was directed at streets in the area with civilians cars and passers-by and that fire lasted for 10 to 20 minutes."

The Interior Ministry said Monday that it had permanently revoked Blackwater's license and would order its 1,000 personnel to leave the country. The following day the government rolled back, suggesting the firm's operations were only suspended pending completion of a joint U.S.-Iraqi investigation.

Iraqis have long resented the presence of the estimated 48,000 private security contractors - including about 1,000 Blackwater employees - considering them a mercenary force that runs roughshod over civilians in their own country.

Blackwater, whose convoys of SUVs careen through the streets with weapons displayed, has been singled out for much of the criticism.

"Blackwater has a reputation. If you want over-over-the-top, gun-toting security with high profile and all the bells and whistles, Blackwater are the people you are going to go with," said James Sammons, a former Australian Special Air Service commander who now works for British-based AKE Group that also provides security in Iraq.

He said any civilian killings by security contractors tarnish the reputations of all of them.

"We get lumped in with that and it makes the job harder for the rest of us," said Sammons, who is AKE's Asia-Pacific regional director, based in Sydney, Australia.

Also Wednesday, the U.S. military said an American soldier was killed the day before in an attack in the south of the capital. The death raised to at least 3,787 members of the U.S. military who have died since the war started in March 2003, according to an Associated Press count.