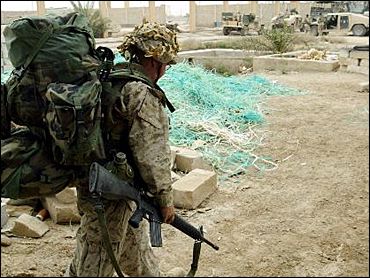 Iraqi forces took over positions from withdrawing Marines and raised the Iraqi flag at the entrance to Fallujah on Friday under a plan to end the monthlong siege of the city and shift security responsibilities to Iraqis led by a former general who served under Saddam Hussein.

Moves to end the siege, which drew strong criticism internationally and from America's Iraqi allies, began despite a suicide car bombing that killed two Marines and wounded six at a garrison on the outskirts of the city. U.S. officials provided no further details on the attack.

The plan for Fallujah's security marked a shift in the U.S. strategy which had marginalized former members of Saddam's Baath Party and abolished the Iraqi army last year. The commander of the new Fallujah Brigade, Maj. Gen. Jassim Mohammed Saleh, once served in Saddam's Republican Guard. He arrived in this besieged city Friday wearing his old uniform to the cheers of bystanders.

Negotiations were also taking place in the southern city of Najaf, where tribal leaders and police discussed a proposal to end a standoff between soldiers and militiamen loyal to radical Shiite cleric Muqtada al-Sadr.

In a sermon, al-Sadr remained defiant, saying he rejected "any appeasement with the occupation." Still, mediators said al-Sadr and U.S. officials agreed to a truce due to last through Sunday.