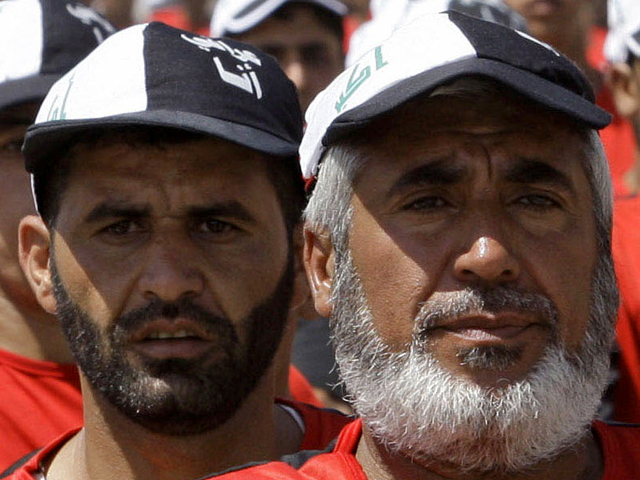 BAGHDAD - Militiamen and followers of anti-American cleric Muqtada al-Sadr led a massive rally on Thursday, marching in Baghdad in a show of force as Iraqi leaders weigh whether to keep U.S. troops in the country beyond the end of the year.

Tens of thousands waved Iraqi flags and shouted "No, no, America!" as the tight columns of the unarmed but ominous-looking members of the Mahdi Army, as al-Sadr's militia is known, marched through one of Baghdad's poorest neighborhoods.

"I am ready to fight the Americans whenever Sayyid (Muqtada) orders me to," Mohammed Moyad, 18, who said he skipped five days of school to train with his colleagues for Thursday's march.

U.S., Israeli and British flags were painted on the pavement to be stomped on by the marching protesters, and Iraqi military helicopters buzzed overhead while soldiers stood guard to keep peace if needed. Organizers said at least 700,000 militiamen and al-Sadr supporters had taken to the streets while the U.S. military downgraded its crowd estimates to about 20,000.

The rally was a message to Prime Minister Nouri al-Maliki about the staunch opposition by Iraq's most devout Shiites — and the ones who grudgingly helped him clinch a second term in office last year — to a continued U.S. military presence in 2012.

Under a security agreement between Washington and Baghdad, the 46,000 combat troops still in Iraq are required to leave by Dec. 31. But Iraq's widespread instability has led U.S. and Iraqi leaders to reconsider the deadline for the sake of the country's security.

Al-Sadr did not appear during the 3 1/2 hour-long rally that ended just at prayer time. Adoring crowds surged at a convoy of more than 10 white sport utility vehicles that was believed to be carrying al-Sadr, but it drove away without stopping and it was unclear if al-Sadr was in the vehicle.

Though the rally was billed as a peaceful demonstration, al-Obeidi said threats against the U.S. still stand if the troops stay, echoing al-Sadr's pledge to unleash the Mahdi Army if Iraq reneges on the December deadline.

"We will be obliged to fight and do our best to liberate our country," al-Obeidi said.

Already, American forces in Baghdad and southern Iraq have seen an increase in rocket and mortar attacks as well as roadside bombs in recent months. U.S. officials have blamed the uptick on Shiite militias backed by Iran who are trying to take credit for driving American forces from Iraq.

Iraqi security forces also come under attack although usually by Sunni extremists trying to destabilize the country. On Thursday, a suicide bomber struck an Iraqi army patrol in western Baghdad, killing four soldiers and wounding 11 others, police and hospital officials said. They spoke on condition of anonymity because they were not authorized to speak to the media.

Al-Obeidi said the point of the rally was to show that Iraqis are disciplined and can protect the country. A statement by parliament Speaker Osama al-Nujaifi, a Sunni, called the march "clear proof to Iraq's unity."

However, al-Nujaifi spokesman Mohammed al-Khalidi sought to distance the speaker from the specter of violence. Al-Khalidi said his presence at the rally did not necessarily mean al-Nujaifi opposes the U.S. presence troop but declined to elaborate.

U.S. officials counted more than 300 busloads — each carrying up to 70 passengers — who traveled from Iraq's south for the rally, and were joined by some of the roughly 2 million who live in Baghdad's northeast Sadr City neighborhood where it was held.

Tens of thousands of militiamen and supporters from around the country marched in the rally wearing matching T-shirts bearing the Iraqi flag and baseball caps reading, "I am Iraqi," as spectators burned American and Israeli banners. Small groups of youths along the parade route also struck Americans flags with twirling kickboxing moves to the delight of onlookers.

Al-Sadr inherited the mantle of the popular Shiite movement from his father, who was beloved by followers and killed by Saddam Hussein's regime. The younger al-Sadr left Iraq in 2007 and took up residence in neighboring Iran, partly to study religion and to avoid an arrest warrant for him at the time.

His return to Iraq in January and public appearance in the holy Shiite city of Najaf south of Baghdad capped a dramatic rise to prominence on the Iraqi political scene. His political party now controls 40 seats in the Iraqi parliament, and his support to al-Maliki was crucial to the Iraqi prime minister winning a second term last year.

Ameen al-Adhami, a Sunni businessman from Azamiyah, said he did not feel threatened by the rally or the show of might from the Mahdi militia that ran death squads though Sunni neighborhoods at the height of Iraq's sectarian war just a few years ago.

"I think today's rally is a message to the Iraqi government, the U.S., and abroad rather than a message to communities inside Iraq or the Sunnis," al-Adhami said. "Today Muqtada al-Sadr is saying: 'Here I am and here's my weight on the ground, so you can't marginalize me.'"