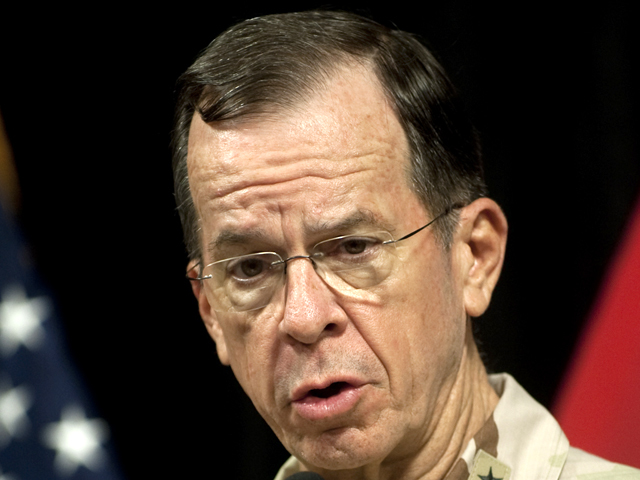 BAGHDAD - If Iraq wants U.S. forces to stay beyond the scheduled withdrawal of all forces by the end of this year, they must open discussions within the next few weeks, Adm. Michael Mullen, chairman of the Joint Chiefs of Staff, told reporters Friday in Baghdad.

U.S. forces were on track to withdraw all forces by Dec. 31, Mullen said, but added that Iraq must initiate discussions "soon, very soon" should the country want some American troops to stay. He said that the emphasis on time is due to certain "irrevocable logistics and operational decisions" that will soon be made, making any extension of the U.S. presence virtually impossible.

Stating that the Iraqi Security Forces have made "extraordinary gains," Mullen's general assessment of the country's military was positive, but he conceded that there were substantial shortfalls in their capabilities.

Mullen cited air defense and intelligence as two areas where the military was lacking. One senior Iraqi politician told CBS News that the Iraqi Security Forces are simply not ready to assume responsibility for security and that, in addition to the problems addressed by Mullen, they lacked sufficient command and control, surveillance and electronic counter-measures that have been instrumental in reducing the violence in the country during the past four years.

Although violent incidents in the capital have dropped to a level that is less than 10 percent of the attacks in 2007, a recent spike in violence has resulted in increased security at checkpoints throughout the city. A suicide bomb on Monday at the entrance to one of the checkpoints for the International Zone killed at least nine people, including an Iraqi journalist.

The politics within Iraq surrounding the issue of the impending deadline for U.S. withdrawal are typically complex, contradictory and confounding. Many Iraqis say that the U.S. is abandoning Iraq and fear that the withdrawal of American troops will lead to a rapid deterioration in security. Others believe that the U.S. must go and that Iraq cannot accept an ongoing U.S. military presence.

Sources familiar with the thinking of Prime Minister Nouri al-Maliki say that he wants some U.S. forces to remain until the Iraqi Security Forces are better prepared to defend the country internally and externally but that he is under strong political pressure not to make such a request.

Maliki's government is a coalition of Iraqi political parties, including followers of the religious firebrand Muqtada al-Sadr, who has made it clear he would abandon the government if Maliki asks U.S. forces to stay.

One Iraqi politician said that Maliki was in an impossible bind. If he asks the Americans to stay, his government will collapse; if he doesn't, security will collapse.