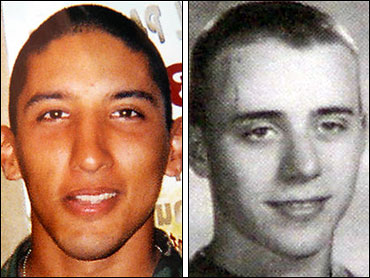 A senior Iraqi military official said Tuesday the bodies of two missing U.S. soldiers have been found near the town where they went missing, but the U.S. military said it could not confirm the report.

At his weekly press briefing Tuesday morning, U.S. Army Maj. Gen. William Caldwell refused to confirm or deny the report, saying it would be inappropriate for the families to hear first from the press.

Maj. Gen. Abdul-Aziz Mohammed said the bodies were found on a street near a power plant in the town of Youssifiyah, just south of Baghdad. U.S. Maj. Doug Powell said he could not confirm the report.

Maj. Frank Garcia, public affairs officer of the 2nd Brigade, 101 Airborne Division, said two bodies had been found, but had not yet been identified.

"There were two bodies found, but they are still going through the process of determining whether they are the missing soldiers or not," he said. "There was some human remains that were found. Two bodies."

The White House says the Pentagon does not yet have confirmation, reports CBS News correspondent Peter Maer.

The Defense Department has identified the missing men as Pfc. Kristian Menchaca, 23, of Houston, and Pfc. Thomas L. Tucker, 25, of Madras, Oregon.

He said the United States should have paid a ransom from money seized from Saddam Hussein.

"I think the U.S. was too slow to react to this. Because the U.S. did not have a plan in place, my nephew has paid with his life."

More than 8,000 Iraqi and American troops searched for the missing soldiers on Monday.

The soldiers were alone, near one of those canals, when local witnesses say their Humvee was surrounded by masked gunman. The rest of their unit heard the attack, but it was too late for the three soldiers.

"Words cannot express the sadness we fell as the loss of Spc. Babineau and the uncertainty of the families of Pfc. Menchaca and Pfc. Tucker must be experiencing," said Caldwell. "Our deepest sympathy goes out to their families."

The Mujahedeen Shura Council, an umbrella organization for a variety of insurgent factions led by al Qaeda in Iraq, offered no video, identification cards or other evidence to prove that they had the Americans. The group had vowed to seek revenge for the June 7 killing of Abu Musab al-Zarqawi, the leader of al Qaeda in Iraq, in a U.S. airstrike.

In a second statement issued minutes after the first, the same group claimed responsibility for the kidnapping of four Russian Embassy workers and the killing of a fifth in Baghdad on June 3.

In the statement, the council taunted U.S. forces for failing to find the two American soldiers, who went missing Friday during an attack on their checkpoint in a Sunni district south of Baghdad.

The attack has been described by Pentagon officials as taking place when a squad of soldiers was manning a checkpoint at a bridge. When they started taking fire from insurgents, CBS News national security correspondent David Martin reports, part of the squad set off in pursuit, leaving three soldiers alone at the checkpoint. One was found dead, and the only sign of the other two was a trail of bloody footprints leading away from the humvee.

"I was 95 percent sure he was one of them," Menchaca's brother, Julio Cesar Vasquez, of Houston, told The Associated Press late Sunday. "I already had an idea because he was at a checkpoint."

Menchaca's wife, 18-year-old Christina Menchaca, of Big Spring, Texas, said military representatives told her Saturday they were taking "every means possible to find him," she said.

The statement dealing with the Russians gave the Moscow government 48 hours to withdraw from Chechnya and to release all "our sisters and brothers in the Russian prisons."

As the White House awaits Pentagon confirmation of the Iraqi report, says Maer, the case of the two soldiers is grim evidence of the president's warning of more challenges ahead in Iraq. It's also a blow to administration hopes for progress following the death of al Qaeda leader Abu Musab al Zarqawi earlier this month.