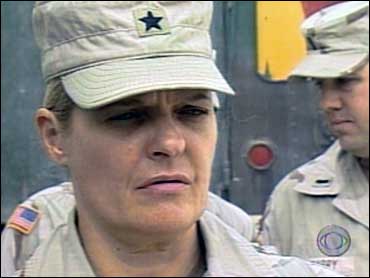 An Army general accused by military investigators of providing too little supervision for an Iraqi prison where abuse of inmates took place has been suspended from her command, officials say.

The decision to temporarily move Brig. Gen. Janis Karpinski from her command of the 800th Military Police Brigade came amid reports that the top U.S. military officer in Iraq, Army Lt. Gen. Ricardo Sanchez, is due to be replaced soon.

Karpinski and other officers in her brigade were faulted by Army investigators for paying too little attention to day-to-day operations of the Abu Ghraib prison and for not moving firmly enough to discipline soldiers for violating standard procedures.

Karpinski's suspension, which has not yet been announced by the Army, was the latest in a series of actions against officers and enlisted soldiers implicated in the abuse scandal at the prison near Baghdad.

Sanchez will be replaced in Iraq in what officials said was his scheduled rotation after 13 months of duty there. Gen. George Casey, the Army's No. 2 officer as vice chief of staff, was in line for the post, reported NBC News, The New York Times, the Los Angeles Times and The Washington Post.

Secretary of State Colin Powell, appearing Tuesday on CBS News' 'The Early Show,' could not say whether Sanchez's departure was in any way related to the prison abuse problem.

"I have read press reports about the transfer of General Sanchez. I don't know if it's confirmed yet officially by the Pentagon but we knew it was part of the normal rotation of commanders," Powell said on The Early Show. "He's done a terrific job and been there for a year now, so it seems to me in the normal scheme of things."

Powell also commented on the fallout from the scandal and its affect on U.S. efforts in Iraq.

"It hurts. I mean, this was a terrible tragedy for our nation and for our image throughout the world, but at the same time, people can see how we handle something like this," Powell said. "With a democratic system, congressional oversight. With investigations that are under way. With people being brought to justice. I think we'll show the world that we are a nation that rests on a solid moral foundation, we have character and do not tolerate this kind of behavior … "

Last week, Spc. Jeremy Sivits received the maximum penalty of a year in prison and a bad-conduct discharge in the first court-martial stemming from the abuse of Iraqis at the prison. He was among seven members of the 372nd Military Police Company that have been charged.

Karpinski, who has returned to the United States, has not been charged with an offense. Being suspended from her command does not mean she has been relieved of command, so technically she could be reinstated, although the intensity of the international furor over the Abu Ghraib prisoner abuse makes that highly unlikely, said the officials, speaking on condition of anonymity.

In his widely cited investigation report on the Abu Ghraib abuse allegations, Maj. Gen. Antonio Taguba found heavy fault with Karpinski's performance and recommended that she be relieved of command and given a formal reprimand. Instead she was given a less-severe "memorandum of admonishment" on Jan. 17 by Sanchez.

Taguba reported that despite the documented abuse of prisoners, he saw no evidence that Karpinski ever attempted to remind the military police in her command of the requirements of the Geneva Conventions, which protect prisoners of war and civilian detainees in times of armed conflict.