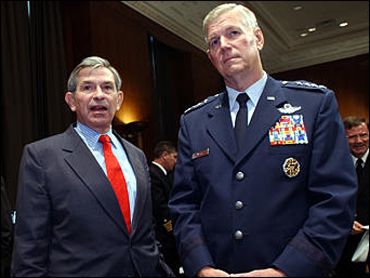 Senate critics of President Bush's handling of Iraq said Tuesday a "go-it-alone approach" has left Americans paying too much of the cost — with his request for $87 billion being only the latest installment.

During four hours of intense questioning by the Senate Armed Services Committee, Pentagon officials said the burden on U.S. troops should ease as Iraqi security forces are trained. They also expressed confidence that more countries will provide troops and money and said the Bush administration is willing to cede some authority in Iraq to win that support.

"The more other countries are prepared to contribute, the more they're absolutely entitled to share in control over how resources are used," Deputy Defense Secretary Paul Wolfowitz said.

But he also said, "Too many hands on the steering wheel, and especially in the military area, is not great."

Tuesday's hearing offered a preview of the debate likely to ensue when Mr. Bush submits to Congress his request for $87 billion for postwar needs in Iraq and Afghanistan. Mr. Bush announced Sunday he would request the money, but Congress has not yet received the proposal.

At a fund-raising appearance in Jacksonville Fla., Mr. Bush pledged to "win this essential victory in the war on terror."

"This country will not be intimidated," he said.

Democratic opponents of the war said they would provide the money needed by U.S. troops. "Congress is willing to do what is needed to protect our troops from the dangers of postwar Iraq," said Sen. Robert Byrd of West Virginia, top Democrat on the Appropriations Committee, which will consider the funding request.

But they said they will look carefully at the $20 billion in the proposal for reconstruction.

"Congress is not an ATM," Byrd said. "We have to be able to explain this new enormous bill to the American people."

Senate Democratic leader Tom Daschle of South Dakota said at a news conference that Mr. Bush's plan must recognize "that there is urgency with regard to meeting the needs in Iraq, but there is an urgency to meet the needs in this country," such as education, health care and homeland security.

At the hearing, Democrats said the failure to build a broad coalition to provide troops and money has placed a harsh economic burden on the United States at a time of a growing federal deficit. The administration seriously underestimated the costs for rebuilding Iraq and the resistance U.S. forces could face after the fall of Saddam Hussein, they said.

Sen. Carl Levin of Michigan, the committee's top Democrat, noted that administration officials had criticized former White House economic adviser Lawrence Lindsey for estimating the Iraq war would cost $100 billion to $200 billion. With the $87 billion request following $79 billion already approved by Congress, "we're already in the upper reaches of that estimate for the first two years of a long commitment," he said.

"And, Mr. Wolfowitz, you told Congress in March that 'We are dealing with a country that can really finance its own reconstruction and relatively soon.' Talk about rosy scenarios," he said.

"It was a go-it-alone policy. And we had a policy in order to win the war, but it's quite clear we didn't have a policy to protect our troops after the war is over," he said.

Not all criticism came from Democrats. Republican Sen. Chuck Hagel of Nebraska said Tuesday on the CBS News Early Show that the administration "did a miserable job of planning the post-Saddam Iraq."

At the hearing, Sen. John McCain, R-Ariz., said "we underestimated the size of the challenge that we would face after the military operations were completed."

Noting estimates by Paul Bremer, the U.S. administrator in Iraq, that reconstruction would cost tens of billions of dollars, McCain said "That was not anticipated before we went in."

Wolfowitz said that before the war, "no one tried to predict the future."

Gen. Richard Myers, chairman of the Joint Chiefs of Staff, said Iraqis were rapidly assuming security responsibilities. They said 55,000 are now fighting alongside Americans and 184,000 are expected by the summer of 2005.

Most Republicans defended the administration, praising its rapid success in toppling Saddam and saying some setbacks were to be expected. "When in history has an operation of this magnitude gone exactly as planned?" said Chairman John Warner, R-Va.

Sen. John Cornyn, R-Texas, said he hopes "that the politics of the moment don't drive criticism that will only serve to undermine the war on terror." Sen. Pat Roberts, R-Kan., questioned whether harsh criticism of the war could send a message to U.S. enemies "that we have a lack of resolve."