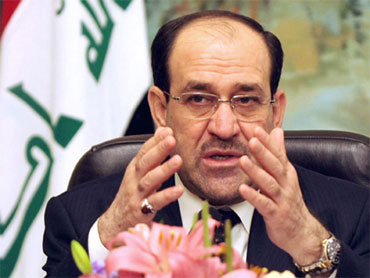 Iraq's prime minister warned on Wednesday that insurgents will try to undermine the country's fledgling democracy in the run-up to January's national elections.

Nouri al-Maliki told tribal leaders from Baghdad's Shiite Sadr City district that maintaining security would remain his top priority because the insurgent groups do not want the January vote to be held in a secure climate.

"What has been achieved in the field of security needs to be safeguarded since the enemy is continuing to try and undermine the political process especially now that elections are imminent," said al-Maliki, whose chances of winning a second, four-year term in office after the January vote are heavily dependent on whether he can maintain and improve the nation's security.

"The enemy does not want the election to be held in a climate of stability in which voters can make the best choice," said al-Maliki, who has been in office since May 2006.

Iraq has seen a significant security improvement over the past two years, but attacks blamed by the government on al Qaeda in Iraq and Saddam Hussein supporters continue to hinder the country's return to normalcy.

The latest high-profile attack was on Oct. 25 when 155 people were killed in a pair of bombings targeting government offices in the heart of Baghdad. Another pair of bombings two months earlier, also against the government, killed at least 100 people.

The attacks undermine confidence in the abilities of Iraq's security forces ahead of the scheduled withdrawal by August 2010 of all U.S. combat forces. The last American soldier is due to leave by the end of 2011, under a U.S.-Iraqi security pact that came into force this year.

"The task of maintaining security must remain at the top of our priorities," said al-Maliki, who is contesting the election at the head of a coalition that groups his Dawa Party as well as smaller independent groups that include fellow Shiites and some Sunni Arabs.

The prime minister, however, warned in his televised comments that repeated blows to insurgents have forced them to rely on sleeper cells, a development that he said placed the counterinsurgency effort primarily on the shoulders of security and intelligence agencies.

Al-Maliki's "State of Law" coalition has made impressive gains in provincial elections in January and will be hard pressed to emulate that success in the next general election now that his Shiite rivals have joined forces in a bid to win the prime minister's job.

Sadr City, whose tribal leaders al-Maliki spoke to Wednesday, is the stronghold of one of his main rivals, followers of anti-American cleric Muqtada al-Sadr who, together with the Supreme Iraqi Islamic Council, constitute the backbone of the rival Shiite-led alliance.

There are an estimated 2.5 million Shiites living in the densely populated Sadr City and al-Maliki appeared to be taking a campaign message to them on Wednesday, promising free or state-subsidized housing and better services.

"Sadr City must be put ahead of anywhere else in Iraq when it comes to services," he told the tribal leaders. It was time, he said, to pay attention to the district after years of neglect. The area suffers particularly acute drinking water and sewage problems and, like the rest of the city, gets only several hours of city power a day in the summer, when 100-plus (40-plus Celsius) temperatures are routine.