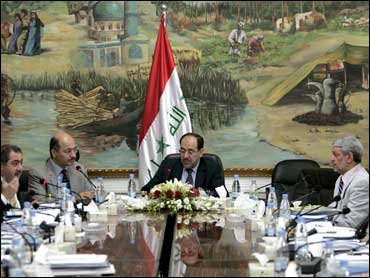 Prime Minister Nouri al-Maliki's Cabinet approved a draft oil law and the Iraqi parliament was to begin debate on the measure Wednesday, a major sign of progress in a long-delayed political benchmark sought by the U.S. to boost reconciliation between Iraq's Sunnis and Shiites.

For months, Washington has pressed al-Maliki to quickly pass the oil law and other pieces of legislation that are considered a vital part of President Bush's attempts to end Iraq's turmoil — alongside a security crackdown by an increased U.S. military force.

But the law, which is to define the distribution of Iraq's oil wealth, has been tied up in bickering between Shiite, Sunni and Kurdish parties in al-Maliki's deeply divided ruling coalition, frustrating U.S. officials as American support for the war has waned.

The prime minister announced Tuesday that his Cabinet had unanimously approved the oil draft and that the parliament would begin discussing it the following day. He called the bill "the most important law in Iraq."

Twenty-four of the Cabinet's 37 members were present for the vote, amid a boycott by ministers from the Sunni Iraqi Accordance Front and the Shiite Sadrist movement over separate political disputes with al-Maliki.

Still, despite al-Maliki's weakened coalition, the approval means parliament is likely to pass the measure. Government spokesman Ali al-Dabbagh said Cabinet approval came after amendments prompted by the Accordance Front. He did not give details on the changes or the bill's final version.

The issue of oil distribution is a top concern of Iraq's Sunni Arab minority, which is centered in regions of the country with little oil resources and which fears Shiites and Kurds — who now dominate the government — would monopolize profits from the industry.

U.S. officials are hoping that passage of an oil bill will help rally Sunni support for the government and the political process and reduce backing for insurgents.

But Kurds, centered in an autonomous zone in the oil-rich north, rejected previous drafts, believing they did not guarantee them a fair share of revenues in northern oil fields they control or hope to control. Shiites, who control major oil resources in the south, have been reluctant to share revenues with Sunnis, who dominated the regime of Saddam Hussein, which oppressed Shiites and Kurds.

Mr. Bush has pressed al-Maliki to take a series of other political steps — opening jobs to Sunnis who supported Saddam, amending the constitution to satisfy Sunni aspirations and holding local elections — aimed at bringing Sunni Arabs into the political process. With support for the war dropping among Americans, the steps would also help convince the U.S. public and Congress that Iraqi leaders are doing what is needed to halt the violence.

The security crackdown, backed by 28,000 extra U.S. troops deployed in Iraq this year, has aimed to give a margin of stability to allow Iraqi politicians to pass the measures. The offensive in Baghdad and areas to the north and south has fueled a surge in American casualties — though bombings and other attacks appear to have fallen in the capital in recent days.

Negotiations over the oil bill have been plagued by squabbling between Iraqi leaders. Al-Maliki's Cabinet endorsed one version of the oil law on Feb. 26 in what was hailed as a breakthrough, but parliament never took up the measure — and further negotiations brought new changes.

One key sticking point was the issue of who should control lucrative untapped fields, where estimated oil reserves could reach 115 billion barrels. An earlier version put them under the control of a yet-to-be established national oil company, something the Kurds reject.

But the sides agreed last month on the distribution of revenues, with the northern Kurdish autonomous zone getting 17 of the net revenues each month, after deducting federal government expenditures. Kurds make up about 20 percent of the population nationwide, though not all live in the Kurdistan region. The remainder of the funds would be divvied up among the other provinces according to population.