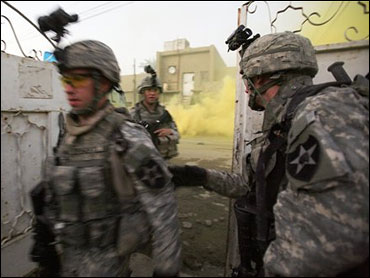 A U.S. military official is charging that Iran is using the Lebanese Shiite militia Hezbollah as a "proxy" to arm Shiite militants in Iraq and that the Quds force — an elite military force in Iran — had prior knowledge of a January attack in Karbala in which five Americans died.

These extremist Shiite militia groups are behind much of Iraq's violence, and although the U.S. army has long accused Iran of funding them, today it went further then ever, pointing a finger directly at the Iranian government, reports CBS News chief foreign correspondent Lara Logan.

Bergner said a senior Lebanese Hezbollah operative, Ali Mussa Dakdouk, was captured March 20 in southern Iraq. Bergner said Dakdouk served for 24 years in Hezbollah and was "working in Iraq as a surrogate for the Iranian Quds force."

The general also said that Dakdouk was a liaison between the Iranians and a breakaway Shiite group led by Qais al-Kazaali, a former spokesman for cleric Muqtada al-Sadr. Bergner said al-Kazaali's group carried out the January attack against a provincial government building in Karbala and that the Iranians assisted in preparations.

These charges will not improve already frosty relations between the United States and Iran, and they come at a time when the U.S. military is under heavy pressure at home to produce results in Iraq, adds Logan.