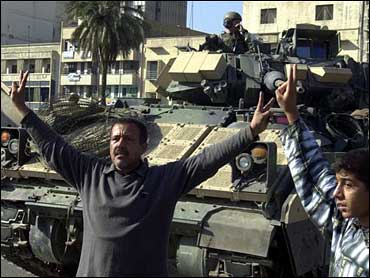 Insurgents ambushed a U.S. patrol, killing a soldier, gunned down four government employees and clashed with American troops in neighborhoods across Baghdad on Saturday. Nine Iraqis died in fighting west of the capital - another sign the insurgency remains potent despite the fall of the rebel stronghold of Fallujah.

Al-Arabiya television quoted Iraqi guerrillas fleeing Fallujah as saying they had run out of ammunition and many fighters who stayed behind are badly wounded.

U.S. troops in the northern city of Mosul found the bodies of nine Iraqi soldiers Saturday, all shot execution-style in the back of the head. The military first reported that seven of the victims had been beheaded, but a second statement issued late Saturday said those "initial reports" were false. The discovery came on top of that of four beheaded bodies that the U.S. military reported Saturday were spotted by American troops several days earlier in Mosul. Those four bodies were still being identified. American and Iraqi forces detained 30 suspected guerrillas overnight in Mosul, the U.S. military said.

In a positive development, a Polish woman abducted last month in Baghdad reappeared Saturday in Poland after being suddenly released. Teresa Borcz Khalifa, 54, refused to say how she was freed but said her captors treated her "properly" - treatment that they told her was "motivated by their religious beliefs."

But the widespread clashes that broke out in Baghdad early Saturday, in at least a half dozen separate neighborhoods, and in other areas of central and northern Iraq, underscored the perilous state of security in this country after 18 months of American military occupation and just over two months before vital national elections.
"Today was not like the other days," journalist Ziyad AL-Samarai reported on Al-Jazeera television. "Clashes took place in more than one area. ...It appeared there was enough coordination to launch attacks at nearly the same time."