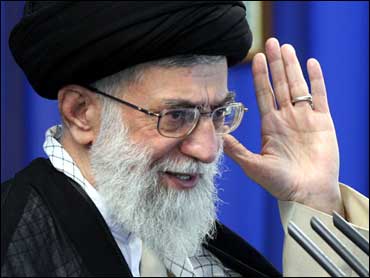 Khamenei's comments were the first top level reaction to a video message Mr. Obama released Friday in which he reached out to Iran on the occasion of Nowruz, the Persian new year.

Khamenei holds the last word on major policy decisions, and how Iran ultimately responds to any concrete U.S. effort to engage the country will depend largely on his say.

In his most direct assessment of President Obama and prospects for improved ties, Khamenei said there will be no change between the two countries unless the American president puts an end to U.S. hostility toward Iran and brings "real changes" in foreign policy.

"They chant the slogan of change but no change is seen in practice. We haven't seen any change," Khamenei said in his speech, which was broadcast live on state television.

In his video message, President Obama said the United States wants to engage Iran and improve decades of strained relations, but he also warned that a right place for Iran in the international community "cannot be reached through terror or arms, but rather through peaceful actions that demonstrate the true greatness of the Iranian people and civilization."

Speaking to tens of thousands of people in the northeastern holy city of Mashhad, Khamenei asked how President Obama could congratulate Iranians on the new year and accuse the country of supporting terrorism and seeking nuclear weapons in the same message.

"As long as the U.S. government continues the same policies and directions of the previous 30 years, we will be the same nation of the past 30 years," Khamenei said. "The Iranian nation can't be deceived or threatened."

Khamenei said there has been no change even in Mr. Obama's language compared to that of his predecessor.

"He (Obama) insulted the Islamic Republic of Iran from the first day. If you are right that change has come, where is that change? What is the sign of that change? Make it clear for us what has changed."

Khamenei enumerated a long list of Iranian grievances against the United States over the past 30 years and said the U.S. was still continuing its acts of interference in Iran's internal affairs now.

He mentioned U.S. sanctions against Iran, U.S. support for Iraqi dictator Saddam Hussein during his 1980-88 war against Iran and the downing of an Iranian airliner over the Persian Gulf in 1988. He also accused the U.S. of provoking ethnic tension in Iran and said Washington's accusations that Iran is seeking nuclear weapons was evidence of U.S. hostility.

"Have you released Iranian assets? Have you lifted oppressive sanctions? Have you given up mudslinging and making accusations against the great Iranian nation and its officials? Have you given up your unconditional support for the Zionist regime? Even the language remains unchanged," Khamenei said.
By Associated Press Writer Ali Akbar Dareini