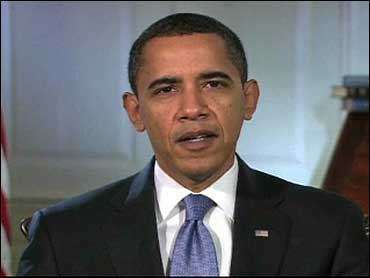 President Obama told Iran's people and leaders that the United States wants to engage with their country and end decades of strained relationship, but not unless their officials stop making threats.

Mr. Obama on Friday released a video message with Farsi subtitles that urged the two countries to resolve their long-standing differences. His video was timed to the festival of Nowruz, which means "new day." It marks the arrival of spring and is a major holiday in Iran.

"So in this season of new beginnings I would like to speak clearly to Iran's leaders," Mr. Obama said in the video. "We have serious differences that have grown over time. My administration is now committed to diplomacy that addresses the full range of issues before us, and to pursuing constructive ties among the United States, Iran and the international community."

In his message Friday, Mr. Obama had a warning for Tehran: "This process will not be advanced by threats. We seek instead engagement that is honest and grounded in mutual respect."

In an initial reaction to the Mr. Obama's appeal, an advisor to Iranian President Mahmoud Ahmadinejad told CBS News' Leily Lankarani that Iran welcomed the idea of putting past troubles behind the two countries, but that the American leader must go beyond "words".

"Mr. Obama has mentioned the New Year. I think we should learn from nature; its rebirth and the fundamental changes that come with it," Ali Akbar Javanfekr told CBS News.

"If he (President Obama) is sincere, he should take steps further than words," Javanfekr said.

The Iranian official did not elaborate on what steps Tehran wanted to see, but said that if Washington did make the desired overtures, "Iran's government and authorities would not turn their backs."

Ahmadinejad has said Iran would welcome talks with the U.S. - but only if there was mutual respect. Iranian officials have said that means the U.S. needs to stop accusing Iran of seeking to build nuclear weapons and supporting terrorism, charges Tehran has denied.

Iran's president, however, may find himself under increasing political pressure from within his country. With Iranians going to the polls early in June to elect the next president, Ahmadinejad is hoping to win another term in office.

Reacting to the video message on Friday, Abtahi told Lankarani it, "can be a real opportunity, and I hope the Iranian authorities will seize the moment and not let this opportunity turn into a threat, as it would not have a desirable outcome for the Iranian people."

President Obama has signaled a willingness to speak directly with Iran about its nuclear program and hostility toward Israel, a key U.S. ally. At his inauguration last month, the president said his administration would reach out to rival states, declaring "we will extend a hand if you are willing to unclench your fist."

It's been a rough start for Mr. Obama.

Iran's supreme leader Ayatollah Ali Khamenei has criticized him as merely a continuation of President George W. Bush's policies toward Tehran's enemy, Israel. Khamenei has called Israel a "cancerous tumor" that is on the verge of collapse and has called for its destruction.

Mr. Obama and his foreign policy team are looking for opportunities to engage Iran and help reduce tensions between the two countries, which increased during Bush's time in office.

"You, too, have a choice. The United States wants the Islamic Republic of Iran to take its rightful place in the community of nations," Mr. Obama said. "You have that right, but it comes with real responsibilities, and that place cannot be reached through terror or arms, but rather through peaceful actions that demonstrate the true greatness of the Iranian people and civilization."

Lankarani reported that most Iranians will be on holiday for Nowruz until April 25, and it wasn't clear how quickly Mr. Obama's message would reach many of them, or whether Iran's government-controlled media would even broadcast it in its entirety.

The White House said the United States still has serious differences with Iran, particularly on the threat a nuclear-armed Tehran poses to the region. But aides said the president's message was a way to speak directly to Iranians about the U.S. commitment to work with the country.

The video also was an attempt to bypass government leaders. Mr. Obama has said there are unelected leaders in Iran who could change the countries' position of hostility.

The holiday Nowruz is not Islamic; Iranians of all religions celebrate the 12-day event. Traditionally, the U.S. president and secretary of state release statements for Nowruz.

"For nearly three decades relations between our nations have been strained," Mr. Obama said in his video message. "But at this holiday we are reminded of the common humanity that binds us together."