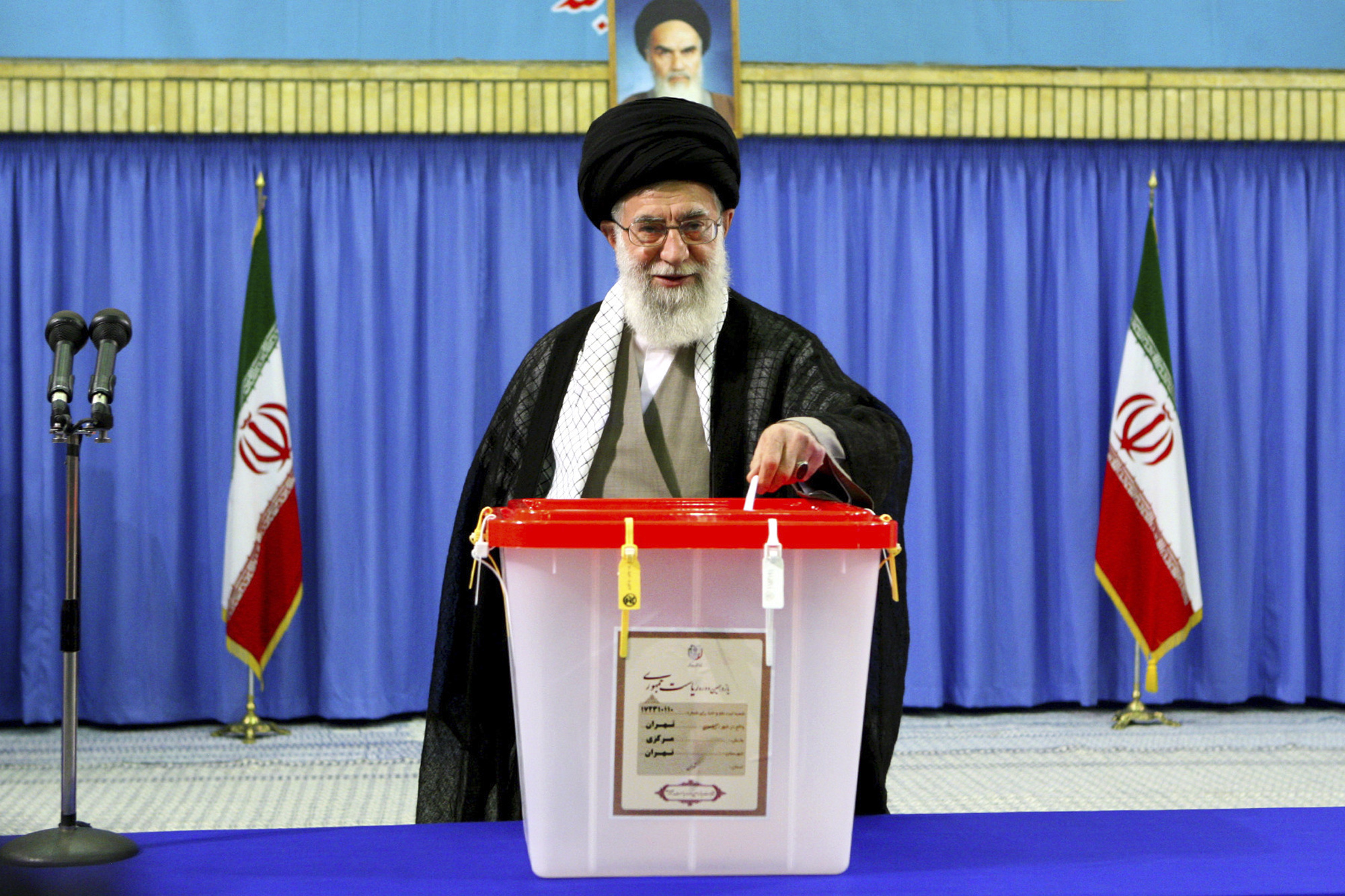 TEHRAN, Iran Reform-minded Iranians who have faced years of crackdowns looked Friday to claw back a bit of ground in a presidential election that gave them an unexpected hero and a chance to upend a vote that once appeared solidly in the hands of Tehran's ruling clerics.

While Iran's presidential elections offer a window into the political pecking orders and security grip inside the country — particularly since the chaos from a disputed outcome in 2009 — they lack the drama of truly high stakes as the country's ruling clerics and their military guardians remain the ultimate powers.

Election officials began the ballot count after voters waited on line for hours in wilting heat at some polling stations in downtown Tehran and other cities, while others cast ballots across the vast country from desert outposts to Gulf seaports and nomad pastures.

Voting was extended by five hours to meet demand, but also as possible political stagecraft to showcase the participation.

The apparent strong turnout suggested liberals and others abandoned a planned boycott as the election was transformed into a showdown across the Islamic Republic's political divide.

On one side were hard-liners looking to cement their control behind candidates such as nuclear negotiator Saeed Jalili, who says he is "100 percent" against detente with Iran's foes, or Tehran's mayor, Mohammad Bagher Qalibaf.

Opposing them were reformists and others rallying behind the "purple wave" campaign of the lone relative moderate left in the race, a former nuclear envoy, Hasan Rowhani.

A preliminary sampling of results from around Iran suggested Rowhani's appeal was broad in cities and rural areas, although the tally was too small to draw clear trends, officials handling the ballot count told The Associated Press.

They spoke on condition of anonymity because they were not authorized to brief media.

But even if the last-moment surge around Rowhani brings him to the presidency, it would be more of a limited victory than a deep shake-up. Iran's establishment — a tight alliance of the ruling clerics and the ultra-powerful Revolutionary Guard — still holds all the effective power and sets the agenda on all major decisions such as Iran's nuclear program and its dealings with the West.

Security forces also are in firm control after waves of arrests and relentless pressures since the last presidential election in 2009, which unleashed massive protests over claims the outcome was rigged to keep the combative Mahmoud Ahmadinejad in power for a second and final term. He is barred from seeking a third consecutive run.

The greater comfort level by the theocracy and Revolutionary Guard sets a different tone this time.

Opposition groups appear too intimidated and fragmented to revive street demonstrations, and even a win by Rowhani — the only cleric in the race — would not likely be perceived as a threat to the ruling structure.

Rowhani led the influential Supreme National Security Council and was given the highly sensitive nuclear envoy role in 2003, a year after Iran's 20-year-old atomic program was revealed.

"Rowhani is not an outsider and any gains by him does not mean the system is weak or that there are serious cracks," said Rasool Nafisi, an Iranian affairs analyst at Strayer University in Virginia. "The ruling system has made sure that no one on the ballot is going to shake things up."

Yet a Rowhani victory would not be entirely without significance either. It would make room for more moderate voices in Iranian political dialogue and display their resilience.

It also would bring onto the world stage an Iranian president who has publicly endorsed more outreach rather than bombast toward the West.

The last campaign events for Rowhani carried chants that had been bottled up for years.

Some supporters called for the release of political prisoners including opposition leaders Mir Hossein Mousavi and Mahdi Karroubi, both candidates in 2009 and now under house arrest. "Long live reforms," some cried at Rowhani's last rally.

The rally was awash in purple banners and scarves — the campaign's signature hue in a nod to the single-color identity of Mousavi's now-crushed Green Movement.

"My mother and I both voted for Rowhani," said Saeed Joorabchi, a university student in geography, after casting ballots at a mosque in west Tehran.

In the Persian Gulf city of Bandar Abbas, local journalist Ali Reza Khorshidzadeh said many polling stations had significant lines and many voters appeared to back Rowhani.

Just a week ago, Rowhani was seen as overshadowed by candidates with far deeper ties to the current power structure: Jalili and Qalibaf, who was boosted by a reputation as a steady hand for Iran's sanctions-wracked economy.

Then a moderate rival of Rowhani bowed out of the presidential race to consolidate the pro-reform camp.

That opened the way for high-profile endorsements including his political mentor, former President Akbar Heshmi Rafsanjani, who won admiration from opposition forces for denouncing the postelection crackdowns in 2009.

This, too, may have led to Rafsanjani's being blackballed from the ballot this year by Iran's election overseers, which allowed just eight candidates among more than 680 hopefuls.

Iran has no credible political polling to serve as harder metrics for the street buzz around candidates, who need more than 50 percent of the vote to seal victory and avoid a two-person runoff next Friday.

Journalists face limits on reporting such as requiring permission to travel around the country. Iran does not allow outside election observers.

Yet it's clear that fervor remains strong for Rowhani's rivals as well.

Qalibaf is riding on his image as a capable fiscal manager who can deal with the deepening problems of Iran's economy and sinking currency.

Jalili draws support from hard-line factions such as the Revolutionary Guard's paramilitary corps, the Basij.

His reputation is further enhanced by a battlefield injury that cost him the lower part of his right leg during Iran's 1980-88 war with Saddam Hussein's Iraq, which at the time was backed by the United States.

Iran's supreme leader, Ayatollah Ali Khamenei, has not publicly endorsed a successor for Ahmadinejad following their falling out over the president's attempts to challenge Khamenei's near-absolute powers.

Ahmadinejad leaves office weakened and outcast by his political battles with Khamenei — yet another sign of where real power rests in Iran.

The usually talkative Ahmadinejad gave only a brief statement to reporters as he voted and refused to discuss the election.

Khamenei remained mum on his own choice even as he cast his ballot. He added that his children don't know whom he backs.

Instead, he blasted the U.S. for its repeated criticism of Iran's clampdowns on the opposition and the rejection of Rafsanjani and other moderates from the ballot.

"Recently I have heard that a U.S. security official has said they do not accept this election," Khamenei was quoted by state TV after casting his vote. "OK, the hell with you."

By many measures, this election is far removed from the backdrop four years ago.

Hackers calling themselves the Iranian Cyber Army disrupted at least a half dozen reform-oriented websites, including one run by well-known political cartoonist Nikahang Kosar.

Prominent reformist politician Mostafa Tajzadeh, who was jailed after the 2009 disputed election, voted from his cell in Tehran's Evin Prison, the semiofficial ISNA news agency reported.

The economy, too, is under far more pressures than in 2009.

New U.S. measures taking effect July 1 further target Iran's currency, the rial, which has lost half its foreign exchange value in the past year, driving prices of food and consumer goods sharply higher.

Outside Iran, votes were casts by the country's huge diaspora including Dubai, London and points across the United States.

"I hope we take a step toward democracy," said Behza Khajavi, a 29-year-old doctoral candidate in physics from Boca Raton, Florida, as he voted in Tampa for Rowhani.

In Paris, a 25-year-old Iranian student, Sohrab Labib, voted at his nation's consulate while a small group of protesters gathered across the street.

"It's our country. It's our future," he said. "In any case, even a little change could influence our future."