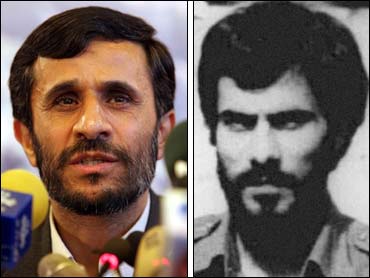 Iran's new president was a member of the hard-line Islamic student group that seized the U.S. Embassy in Tehran in 1979, but he opposed the takeover — preferring instead to target the Soviet Embassy, friends and former hostage-takers said Thursday.

The former students who carried out the seizure and held the Americans for 444 days said Mahmoud Ahmadinejad had no role in taking the embassy or guarding the hostages.

In the turbulent early days of Iran's Islamic Revolution, Ahmadinejad was more concerned with putting down leftists and communists at universities than striking at Americans, they said. During the long standoff, he was writing and speaking against leftist students, they said.

At least one member of the current Iranian government definitely was involved in the hostage crisis.

The current Iranian environment minister, Massoumeh Ebtekar, was the chief interpreter and spokeswoman for the radical students who took over the U.S. Embassy and held 52 Americans hostage for 444 days.

Dubbed "Sister Mary" by the American press because her heavy head scarf resembled a nun's habit, Ebtekar gave almost nightly interviews during the standoff, denouncing the hostages as spies and accusing the United States of committing crimes.

Ebtekar, who is also one of Iran's six vice presidents, has been the highest-ranking woman in the moderate-leaning government of President Mohammad Khatami.

She acknowledged her part in the U.S. Embassy takeover in remarks to reporters in 1998.

Talk about the "who's who" of Iranians who in 1979 and 1980 seized and held the American hostages in Tehran began on Wednesday, when five former U.S. hostages who saw Iranian President-elect Mahmoud Ahmadinejad in photos or on television said they believe he was among the hostage-takers. One said he was interrogated by Ahmadinejad.

"If he died his hair blond and shaved his beard I could still spot him," former hostage Chuck Scott told CBS News. Scott says Ahmadinejad was an especially brutal leader among the militants, a man who blasted his own guards for showing the Americans any kindness.

"He went into a rage right there and said 'you can't do that.' These people are animals. They are pigs. The only time they should ever get out of their cells is when they are taken out for execution," Scott told CBS News Correspondent Jim Acosta.

"Yeah, I recognize him too,'' former hostage Dave Roeder told CBS News. "And he was in fact present at one of my interrogations."

"I think we're really at a pretty early stage of jogging people's memories," said Michael O'Hanlon, a senior fellow at the Brookings Institution, on CBS News' The Early Show. "I'm inclined to think the former hostages are right. But they'll have to jog their memories, keep working at this. Because we all know remembering faces from 25 years ago is a tough thing even in such a powerfully emotional experience."

The White House said Thursday it was taking their statements seriously. President Bush said "many questions" were raised by the allegations.

The flap could add another layer of mistrust between the United States and the former Tehran mayor, who was elected president last week with the backing of some of the most hard-core members of the Islamic regime.

"This is a bad thing, but more the crowning blow or the icing on the cake in what's already a bad relationship," O'Hanlon told Early Show co-anchor Harry Smith.

The White House is taking a "wait and see" approach to the controversy, reports CBS News White House correspondent John Roberts. The administration expects to get a clearer picture of what to expect from Ahmadinejad in July, when Iran is set to resume negotiations about its nuclear program with European nations.

Leaders of the Office of Strengthening Unity, the radical Islamic student group that carried out the Nov. 4, 1979, takeover of the embassy, said Ahmadinejad was not among the hostage-takers.

"He was not part of us. He played no role in the seizure," Abbas Abdi, one of six leaders of the group, told The Associated Press.

Mohsen Mirdamadi, leader of the students who swept into the embassy, also said Ahmadinejad was not involved.

Abdi and Mirdamadi are now leading proponents of reform that would support democratic changes and are at loggerheads with Ahmadinejad.

Mohammad Ali Sayed Nejad, a friend of the president-elect, said he and Ahmadinejad were the only two members of the Office of Strengthening Unity who opposed taking the U.S. Embassy.

"While the bulk of student leaders planned and took part in the seizure of the U.S. Den of Spies (U.S. Embassy), we two were extremely worried about communist groups," Sayed Nejad said.

He and Ahmadinejad unsuccessfully argued in favor of seizing the Soviet Embassy, and Ahmadinejad told colleagues in a recent meeting he opposed targeting the American mission because it would bring international condemnation down on Iran.

"I believed that if we did that, the world would swallow us," he said, according to Meisan Rowhani, an aide who was at the meeting.

Ahmadinejad dropped his opposition to the U.S. Embassy takeover after the revolution's leader, Ayatollah Ruhollah Khomeini, expressed support for it, but he never participated, said Rowhani.

The Office of Strengthening Unity was formed before the embassy takeover, and its main goal was to support Khomeini's bid to impose an Islamic government after the removal of the U.S.-backed Shah Mohammed Reza Pahlavi.

The embassy takeover galvanized the Islamic factions. The embassy became a focal point for Islamic supporters; hundreds of students, even those not directly involved in the holding of the hostages, had access to the embassy.

Rasool Nafisi, a Middle East analyst who studies conservative groups in Iran, said that Ahmadinejad was a founder of the Office of Strengthening Unity, but the group decided that taking over the embassy was the wrong policy. A group of students that separated themselves from the office planned and carried out the takeover, he said.

Nafisi said Ahmadinejad was not one of those who separated from the original organization, but may have frequented the embassy as one of the thousands of the students who camped out or were involved in protests there.