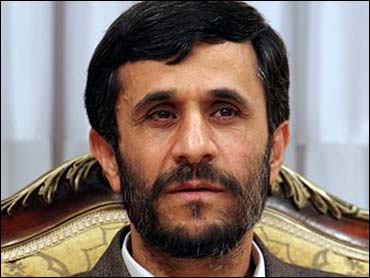 A quarter-century after they were taken captive in Iran, five former American hostages say they got an unexpected reminder of their 444-day ordeal in the bearded face of Iran's new president-elect. But others are not so sure.

Watching coverage of Iran's presidential election on television dredged up 25-year-old memories that prompted four of the former hostages to exchange e-mails. And those four realized they shared the same conclusion — the firm belief that President-elect Mahmoud Ahmadinejad had been one of their Iranian captors.

"This is the guy. There's no question about it," said former hostage Chuck Scott, a retired Army colonel who lives in Jonesboro, Ga. "You could make him a blond and shave his whiskers, put him in a zoot suit and I'd still spot him."

Scott and former hostages David Roeder, William J. Daugherty and Don A. Sharer told The Associated Press on Wednesday they have no doubt Ahmadinejad, 49, was one of the hostage-takers. A fifth ex-hostage, Kevin Hermening, said he reached the same conclusion after looking at photos.

"It stopped me cold in the middle of the room, and I knew, it wasn't one of those things, where, gee, you know that's a familiar face. I knew absolutely and immediately where I had seen that guy before," Roeder said.

Not everyone agrees. Former hostage and retired Air Force Col. Thomas E. Schaefer said he doesn't recognize Ahmadinejad, by face or name, as one of his captors.

Several former students among the hostage-takers also said Ahmadinejad did not participate. And a close aide to Ahmadinejad denied the president-elect took part in the seizure of the embassy or in holding Americans hostage.

Militant students seized the U.S. Embassy in Tehran on Nov. 4, 1979, and held 52 Americans hostage for 444 days to protest Washington's refusal to hand over the U.S.-backed Shah Mohammad Reza Pahlavi for trial. The shah fled Iran earlier that year after he was overthrown by the Islamic Revolution.

Meisan Rowhani, an aide to the president-elect, told the AP from Tehran that Ahmadinejad was asked during recent private meetings if he had a role in the hostage taking. Rowhani said he replied, "No. I believed that if we do that, the world will swallow us."

Scott and Roeder both said they were sure Ahmadinejad was present while they were interrogated.

"I can absolutely guarantee you he was not only one of the hostage-takers, he was present at my personal interrogation," Roeder said in an interview from his home in Pinehurst, N.C.

Daugherty, who worked for the CIA in Iran and now lives in Savannah, said a man he's convinced was Ahmadinejad was among a group of ringleaders escorting a Vatican representative during a visit in the early days of the hostage crisis.

"It's impossible to forget a guy like that," Daugherty said.

Ahmadinejad, the hard-line mayor of Tehran, was declared winner Wednesday of Iran's presidential runoff election, defeating one of Iran's best-known statesmen, Ayatollah Hashemi Rafsanjani. The stunning upset put conservatives firmly in control of all branches of power in the Islamic Republic of Iran.

Scott, Roeder, Daugherty and Sharer said they have been exchanging e-mails since seeing Ahmadinejad emerge as a serious contender in Iran's elections.

After seeing recent newspaper photos, Sharer said, "I don't have any doubts" that Ahmadinejad was a hostage-taker.

A memory expert cautioned that people who discuss their recollections can influence one another in reinforcing false memories. Also, it's harder to identify from memory someone of a different race or ethnicity, said psychologist Elizabeth Loftus of the University of California, Irvine.

"Twenty-five years is an awfully long time," Loftus said. "Of course we can't say this is false, but these things can lead people down the path of having a false memory."

Schaefer, of Peoria, Ariz., didn't recognize Ahmadinejad and said allegations that he had been a hostage-taker don't concern him as much as knowing hard-liners are back in power in Iran.

Scott gave a detailed account of the man he recalled as Ahmadinejad, saying he appeared to be a security chief among the hostage-takers.

"We knew from what other guards had told us that he was a leader and he was a, what I'd call a 'hardass' (tough character), and even some of the regular guards referred to him as being very strict and very anti-American," Scott said.

Roeder said he's sure Ahmadinejad was present during one of his interrogations when the hostage-takers threatened to kidnap his son in the U.S. and "start sending pieces — toes and fingers of my son — to my wife."

"It was almost like he was checking on the interrogation techniques they were using in a sort of adviser capacity," Roeder said.

Hermening, of Mosinee, Wis., the youngest of the hostages, said that after he looked at photos and did research on the Internet, he came to the conclusion that Ahmadinejad was one of his questioners.

"His English would have been fairly strong. I couldn't say that about all the guards," Hermening said. "I remember that he was certainly direct, threatening, very unfriendly."

Rowhani, the aide to Ahmadinejad, said Ahmadinejad said during the recent meeting that he stopped opposing the embassy seizure after the revolution's leader, Ayatollah Ruhollah Khomeini, expressed support for it. But the president-elect said he never took part.

"Definitely he was not among the students who took part in the seizure," said Abbas Abdi, the leader of the hostage-takers. Abdi has since become a leading supporter of reform and sharply opposed Ahmadinejad. "He was not part of us. He played no role in the seizure, let alone being responsible for security" for the students.

Another of the hostage-takers, Bijan Abidi, said Ahmadinejad "was not involved. There was no one by that name among the students who took part in the U.S. Embassy seizure."