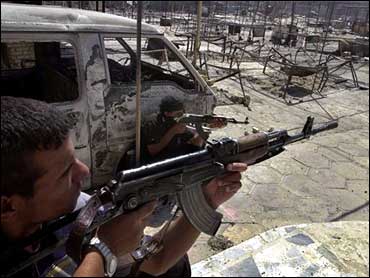 Militants said they took a top Iranian diplomat hostage, according to video shown on the Arab-language Al-Arabiya television station.

The tape showed a bearded man identified as Faridoun Jihani speaking to the camera, though his voice was not audible.

The video also showed his identification, passport and a business card identifying him as the "consul for the Islamic Republic of Iran in Karbala," a southern Iraqi city.

The kidnapping has been confirmed by the Iranian embassy in Baghdad.

The kidnappers, calling themselves the "Islamic Army in Iraq," accused Jihani of provoking sectarian war in Iraq and warned Iran not to interfere in Iraq's affairs, according to Al-Arabiya.

The kidnappers made no demands, the report said.

Militants have taken scores of foreigners hostage in recent months, trying to drive coalition troops out of Iraq and hamper reconstruction efforts.

Protected by 100 guards, Iraq's interim Prime Minister Ayad Allawi visited the war-shattered city of Najaf on Sunday, calling on militants to lay down their weapons after days of fierce clashes with U.S. forces.

"We think that those armed should leave the holy sites and the (Imam Ali Shrine compound) as well as leave their weapons and abide by the law," Allawi said during a one-hour visit for talks with Najaf Gov. Adnan al-Zurufi.

Allawi's government announced the reinstatement of the death penalty, part of a new approach for putting down the 15-month insurgency in Iraq. Capital punishment would be allowed for those convicted of murder, endangering national security and distributing drugs.

"The tough task in front of us in this country is maintaining security and stability, combating terror and organized crime," Human Rights Minister Bakhtiar Amin said as he and the justice minister announced the decision.

Capital punishment was suspended during the U.S. occupation. The reinstatement came a day after the government announced an amnesty for those playing minor roles in the insurgency — though not for anyone who has killed.

Iraq's Minister of State Adnan al-Janabi insists the death penalty has not been brought back to deal with Saddam Hussein, reports CBS News Correspondent Steve Holt.

The fierce fighting in Najaf has raised fears of the revival of a Shiite insurrection led by al-Sadr's militia in April, which died down in June after a series of fragile truces. A new uprising would cause severe problems for Allawi's interim government, which has made restoring security a priority.

Shortly after he arrived at the governor's office, fighting erupted about a half-mile away between police and al-Sadr's forces. Gunfire and explosions were heard, and U.S. helicopter gunships circled overhead.

Allawi and his delegation — including his interior minister, defense minister and national security adviser — did not meet with al-Sadr or any of his aides.

Allawi said there were no plans to arrest al-Sadr, but he said there would be no negotiations until al-Sadr's militia laid down its arms. He was optimistic the violence would cease.

"There are some elements who have broken the law and hurt this city," Allawi said. "The situation will be defused soon."

"We are trying to defend our country. We are not going to leave Najaf or any other city," said Abu Thar al-Kinani, an al-Sadr aide in Baghdad. "The occupiers are the ones who should leave Najaf and the rest of Iraq."

He was referring to coalition troops.

The Mahdi Army controls the Imam Ali Shrine compound, one of the most revered sites in Shiite Islam, where the remains of Imam Ali, son-in-law and cousin of the Islam's 7th-century prophet Muhammad, are buried.

Al-Sadr's militia clashed with police in Amarah, 110 miles southeast of Baghdad, in fighting that continued until dawn, police Lt. Haider Noori said. Various reports said as many as four people - including a policeman - were killed and as many as 12 people were wounded.

Shiite insurgents also clashed with Danish troops in Qurnah, about 235 miles southeast of Baghdad, beginning late Saturday. At least two militants were killed and seven were wounded after a Danish patrol was attacked by al-Sadr fighters, said Karim Sadkhan, a police colonel in Basra.

In Denmark, a military spokesman said no Danes were injured. Denmark has a 496-person contingent in Iraq.

The U.S. military said it was investigating the death of an American soldier in "a non-combat related incident." The soldier died Saturday in Baghdad, the military said, giving no other details.

Also in the capital, a bus laden with 440 pounds of explosives blew up late Saturday, killing four people aboard, said Col. Adnan Abdul-Rahman, an information officer at the Interior Ministry.

It was not immediately known why the men were carrying explosives — though it was likely they were planning a terror attack.