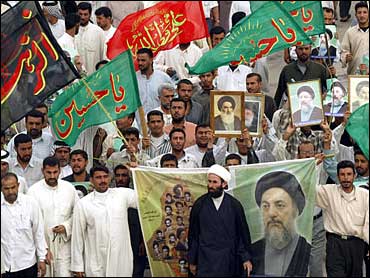 Writing in The Wall Street Journal, Rumsfeld insisted that while "assistance from Iraq's neighbors will be welcomed," there were limits on the roles other countries could play.

"Interference in Iraq by its neighbors or their proxies — including those who objective is to remake Iraq in Iran's image — will not be accepted or permitted," he wrote.

It was the latest in a series of tough statements by American officials on what the U.S. alleges are Iran's support for terrorism, weapons of mass destruction, relationship with al Qaeda and designs on Iraq.

It came as the White House convened a meeting to consider a new U.S. policy towards Iran that could include moves to topple the theocratic government there.

The meeting was apparently spurred by alleged links between recent bombings in Saudi Arabia and suspected al Qaeda members supposedly hiding in Iran.

The Journal reports the meeting's chief purpose is to consider Iran's response to American demands that it hand over the alleged al Qaeda associates.

But published reports indicate the meeting will take a broader look at U.S.-Iran policy. The Washington Post reports that Pentagon officials are pushing for regime change, and State Department officials may accept that approach.

That would mark a shift in strategy from the rapprochement between Tehran and Washington over the past two years, which included some cooperation in the war on terrorism and regular contacts, including meetings in Geneva earlier this month.

But the Bush administration has cancelled the next scheduled session, The Post reports.

The senior Democrat on the Senate Foreign Relations Committee warned Tuesday that the White House should first finish its military missions in Iraq and Afghanistan before turning attention to Iran.

"We've got a long way to go there," Delaware Democrat Joseph Biden said of Iraq. "I don't think we should be biting off more than we can chew right now."

"I think we should be working with and supporting the civilian leadership in there that's been taking on the clerical leadership," in Iran, he said. "But in terms of going in there with force now and going in there to take down 'that regime' or form any revolution, we should be a little bit careful here at this point."

There are no indications the Bush administration is considering military action.

While the Riyadh bombings on May 12 — which killed 34 people, including eight Americans — are the immediate cause for the policy review, its roots go far deeper. Some influential conservatives with ties to the administration, like Pentagon adviser Richard Perle, have called for policies leading to a change in the Iranian government.

In President Bush's 2002 State of the Union speech, he listed Iran as a member of the "axis of evil," along with Iraq and North Korea.

In an address at the height of the war in Iraq in March, Secretary of State Colin Powell warned Iran to "end its support for terrorists" and "stop pursuing weapons of mass destruction and the means to deliver them."

In its most recent report on global terrorism, the State Department asserts that Iran "remained the most active state sponsor of terrorism in 2002." It accuses Iran of providing money, refuge, training and weapons to Hezbollah, Hamas and Islamic Jihad.

According to a CIA report released in April, Iran has chemical weapons including blister, blood and choking agents as well as weapons to carry them, and probably has made nerve agents.

The CIA also believes Tehran is likely to have a biological weapons program, but only "a limited ability to weaponize" any biological agents.

The U.S. and Iran are locked in a dispute over what Washington alleges is a secret nuclear weapons program by the Iranians. Tehran insists its nuclear activities are civilian in nature.

The Post reported Tuesday that an Iranian opposition group, the National Council of Resistance of Iran, claims to have evidence of two previously undisclosed nuclear sites near Tehran. Two weeks ago, the same group claimed Iran had biological weapons programs, quoting sources inside the Iranian government.

Iran remained almost silent during the war in neighboring Iraq. But after the major fighting ended, the U.S. accused Tehran of staging demonstrations against the American occupation.

U.S. forces briefly allowed an anti-Iran group based in Iraq, the Mujahedeen al Khalq or People's Mujahedeen, to keep its weapons — even though the State Department considered it a terrorist group. American troops ultimately disarmed the group.

"There's no question but that there have been and are today senior al Qaeda leaders in Iran, and they're busy," Rumsfeld said.

Iranian Foreign Minister Kamal Kharrazi told the government's Tehran television Sunday that his country does not — and would not shelter al Qaeda terrorists and has jailed some of its members.

"While it has detained and turned over to foreign governments a number of al Qaeda members, other al Qaeda members have found virtual safe haven there and may even be receiving protection from elements of the Iranian Government," the report read.