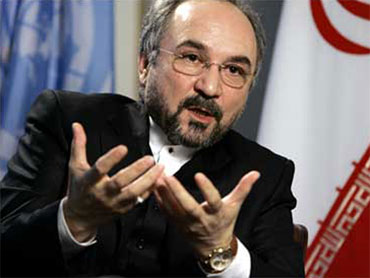 This story was filed by CBS News foreign affairs analyst Pamela Falk from the United Nations.

Within hours of President Obama's news conference at the close of a summit to rid the world of "loose nukes" in Washington, Iran's Ambassador to the United Nations distributed a blistering response in a letter to U.N. leaders accusing the Obama administration of "nuclear blackmail".

CBS News was sent a copy of the letter, which Ambassador Mohammad Khazaee addressed to the U.N. Security Council and the General Assembly President.

In the letter, Khazaee says statements made by Mr. Obama and other senior U.S. officials "are tantamount to nuclear blackmail."

Khazaee (seen above) specifically cites comments made by Secretary of Defense Robert Gates immediately after the administration announced sweeping changes to the U.S. nuclear engagement policy in its "Nuclear Posture Review".

Speaking at the Pentagon, Gates told reporters the new U.S. nuclear policy, "has a very strong message for Iran."

Khazaee slammed those remarks, saying they "constitute a serious violation of the United States obligations and commitment, under international law, particularly Article 2 (4) of the Charter of the United Nations and also the provisions of the Security Council resolution 984 (1995), to refrain from the threat or use of force against any State." (Full letter reprinted below)

Now that is the pot calling the kettle black. Iranian leaders have on numerous occasions made direct threats to Israel, and they continue to flout mounting international pressure to halt a uranium enrichment program which Mr. Obama and his Western allies fear is secretly aimed at producing nuclear weapons. Iran insists the program is meant to generate electricity, and nothing else.

Iran: Sanctions "Will Hurt," But Not Too Much Blog: Iran's Nuke Chief Stuck Between Science and Politics Full Transcript of Interview with Iran Nuke Chief

Iran has for years befuddled the West with conflicting messages over their willingness to negotiate on their nuclear program. Even as Khazaee delivered the letter at U.N. headquarters, according to Reuters, Iranian President Mahmoud Ahmadinejad said Iran would respond positively -- if the United States changed its policy towards Tehran.

Meanwhile, the five Permanent Members of the U.N. Security Council, plus Germany, (the "P5+1") met Monday night in Washington to plan a second round of negotiations to impose a fourth round of sanctions on Iran.

Below is a reprint of the letter sent by Iran's U.N. delegation

In the Name of God, the Compassionate, the Merciful

On 6 April 2010, the United States government published its Nuclear Posture Review [NPR] which outlines the U.S. nuclear strategy and policy, and among others, contains groundless allegations against the peaceful nuclear program of the Islamic Republic of Iran. Following the release of NPR, some high-ranking officials of the United States including the U.S. President and Secretaries of State and Defense, on the basis of wholly wrong assumption, have made public and implicit statements, threatening to use nuclear weapons against the Islamic Republic of Iran. For instance, Secretary of Defense of the United States, in a news briefing held on 6 April 2010 at the Pentagon, asserted that "the NPR has a very strong message for Iran..., because whether it's in declaratory policy or in other elements of the NPR, we essentially carve out states like Iran.... And basically all options are on the table when it comes to countries in that category". He added "so, if there is a message for Iran here, it is that... all options are on the table in terms of how we deal with you."

In view of these developments, I would like to draw your kind attention to the following points:

1- Such inflammatory statements which are tantamount to nuclear blackmail against a non-nuclear-weapon State signatory to the Treaty on the Non-Proliferation of Nuclear Weapons (NPT) constitute a serious violation of the United States obligations and commitment, under international law, particularly Article 2 (4) of the Charter of the United Nations and also the provisions of the Security Council resolution 984 (1995), to refrain from the threat or use of force against any State.

2- It is evident that these statements are not only declaration of intention but also part of official document which articulate the United States policy on first use of nuclear weapons, at its discretion, against a non-nuclear-weapon State Party to the NPT, and, therefore, pose a real threat to international peace and security and undermine the credibility of the NPT. Such remarks by the U.S officials display once again the reliance of the U.S government on militarized approach to various issues, to which the threats of use of nuclear weapons are not a solution at all.

4- After 40 years since the entry into force of the NPT, and while the U.S. officials are apparently advocating the nuclear non-proliferation, let's not forget that the United States as the only nuclear power to have used a nuclear weapon against the citizens of Hiroshima and Nagasaki as a result of which 200,000 people perished, continues to illegitimately designate a non-nuclear weapon State as target of its nuclear weapons and contemplates military plans accordingly.

It would be highly appreciated if this letter could be circulated as a document of the Security Council and that of the General Assembly, under agenda item 9, 82, 92, 93, 96 and 107.

Please accept, Excellency, the assurances of my highest consideration.