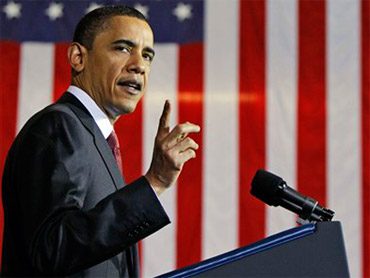 Don't worry. You don't have to read all 72 pages of the Nuclear Posture Review (NPR) to understand some of the finer points of Armagaddeon-gery.

Here's a guide to some of the key debates -- and key questions -- about President Obama, nuclear weapons, and terrorism. In other words, a layman's guide to understanding what the wonks are talking about?

Here's what the NPR says:

" ....the United States is now prepared to strengthen its long-standing 'negative security assurance' by declaring that the United States will not use or threaten to use nuclear weapons against non-nuclear weapons states that are party to the [Nuclear Nonproliferation Treaty, or NPT] and in compliance with their nuclear non-proliferation obligations.

"This revised assurance is intended to underscore the security benefits of adhering to and fully complying with the NPT and persuade non-nuclear weapon states party to the Treaty to work with the United States and other interested parties to adopt effective measures to strengthen the non-proliferation regime."

The idea is to use the NPT as the objective guideline. If a non nuclear country adheres to its obligations, the U.S. won't use nukes against it -- ever -- which means that European countries won't use nukes either.

Big caveat: ever means the opposite -- the U.S. reserves the right to change its mind if other countries develop significant new chemical, biological or conventional warfare capabilities that pose a direct threat to the U.S. and its allies.

James Miller, the Pentagon official who co-wrote the final draft of the NPR, said that task force participants had indeed discussed whether it was time to limit the use of nuclear weapons to respond to countries that also possess them.

"The conditions today don't exist to go to a sole purpose statement for U.S. nuclear weapons," he said. "That was ultimately a decision by the president."

The NPR states that "[t]he role of nuclear weapons in U.S. national security and military strategy has been reduced significantly in recent decades, but further steps can and should be taken at this time."

We're getting to it... "The fundamental role of U.S. nuclear weapons, which will continue as long as nuclear weapons exist, is to deter nuclear attack on the United States, our allies, and partners."

Fundamental doesn't mean "sole" -- although the NPR does list sole purposes as an objective that the U.S. wants to move to.

The international political dimension to this question is complex: many of our allies are divided about the extent to which our nuclear deterrent, as robust as it is, contributes to proliferation.

But in private, the elected leaders of our allies tend to tell our presidents that they would be nervous about -- "unsettling" was how one administration official put it -- changing the umbrella metaphor under which their security is guaranteed.

Should U.S. nuclear weapons be on hair trigger alert? Well, yes and no.

On the one hand, when the president decides to use a nuke, the nuke should respond instantly to his direct command. On the other hand, the Cold War posture was set up in such a way as to deprive human beings of reaction time -- time to think through consequences.

The struggle to balance acuity and decision science is not new. Since the Cold War, the U.S. has taken one element of its nuclear triad -- subs, missiles and airplanes -- off of alert status. But bombers and their pilots remain ready at moment's notice, and it's very easy to re-target a missile within seconds.

So what happens if a missile is launched accidentally? Its navigation systems will lead it to splash in an ocean. This is what the military calls "open-ocean targeting."

Gen. James Cartwright, the Vice Chairman of the Joint Chiefs of Staff, said that the U.S. strategic command continues to "architect" a system that would "increase decision time, increase assurety, and put the pieces together in an architecture that would give the president higher confidence that he had complete control of the stockpile."

Command and control is controversial and sensitive. Sensitive, because we as a public don't know whether battlefield commanders have the authority to order the use of so-called non-strategic nuclear weapons -- smaller nukes -- tactical nukes.

That remains highly classified. Russia has many more tactical nukes than we do, and their rules of engagement are similarly shrouded in mystery.

The question of tactical nukes is one Cold War legacy that the NPR punts on. Robert Einhorn, a top administration adviser on counterproliferation, said that NATO members were wary of any unilateral change to the rules of engagement, and so NATO will take up this issue as a collective -- and the U.S. and Russia plan to talk about it in the future.

To the dismay of some in the arms control community, the administration seems to embrace a robust missile defense architecture for Europe.

Notably, the recently concluded START follow-on treaty did not include any significant limitations on missile defense -- a strategic victory of sorts for the United States.

The NPR makes missile defense a centerpiece of the U.S. deterrent umbrella, which would allow, in theory, less reliance on nuclear weapons to serve as that deterrent. That's the trade-off: find more conventional ways of deterring nuclear threats.

So the rejoinder to the increased reliance on missile defense is this: terrorists aren't going to use missile systems, Mr. President. True, but that's a straw man argument, so far as the administration is concerned.

By strengthening the conventional deterrent, by using the Non-proliferation Treaty as a framework for enforcement and incentives, the United States hopes to create an international mechanism to deal with non-state actors who want to acquire and deploy nuclear weapons.

So missile defense plays an indirect role in deterring nuclear terrorism, according to the NPR. In any event, missile defense is normally associated with defense hawks -- that's a Cold War legacy.

It is not clear what the NPR's embrace of it as a concept means for the actual deployment of systems in Europe and elsewhere, which is something Republicans point to today as an indication that the NPR isn't strong enough.