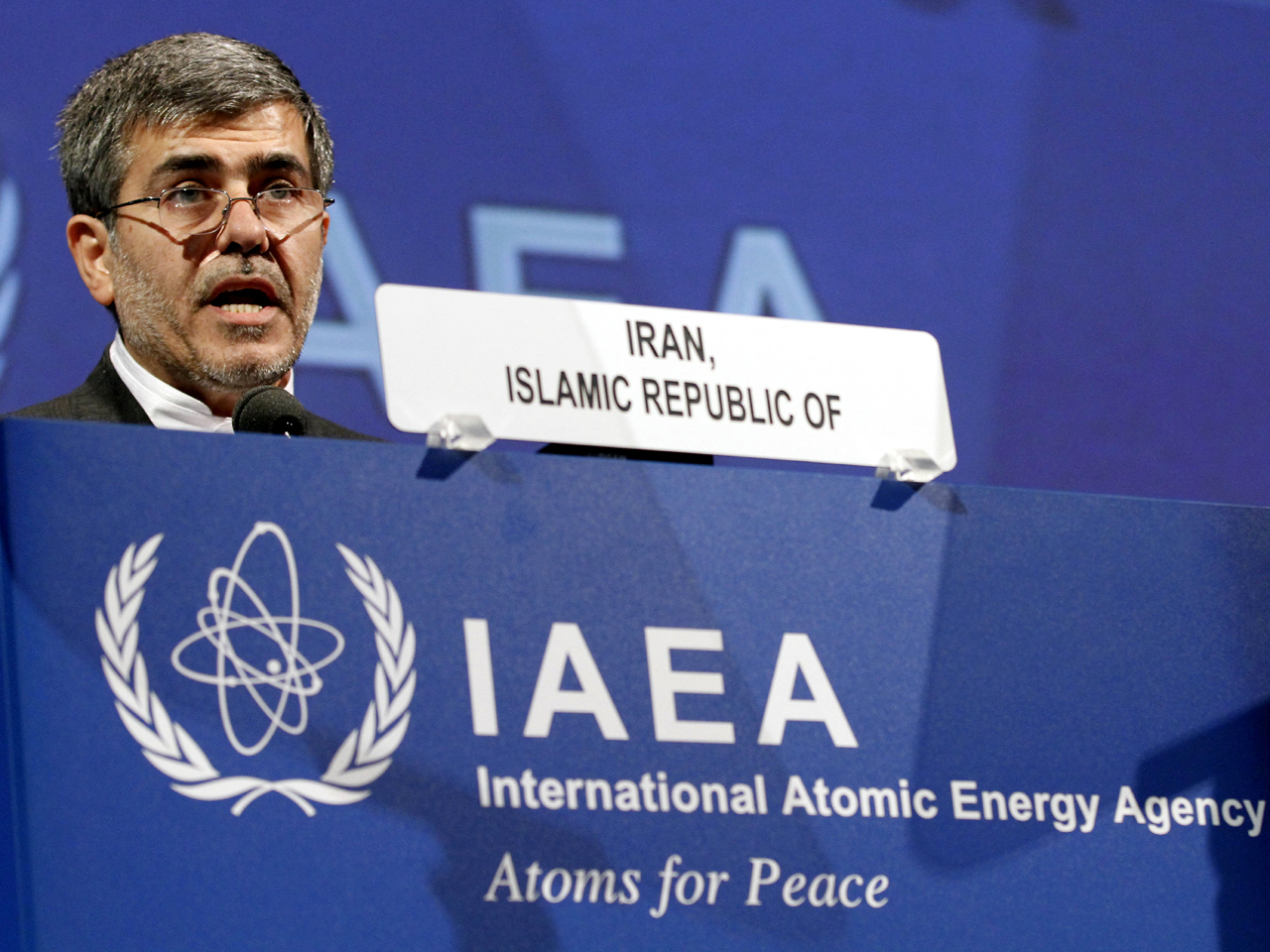 (AP) VIENNA - Iran's nuclear chief said Monday that "terrorists and saboteurs" might have infiltrated the International Atomic Energy Agency in an effort to derail his nation's atomic program, in an unprecedentedly harsh attack on the integrity of the U.N. organization and its probe of allegations that Tehran is striving to make nuclear arms.

Fereydoun Abbasi also rebuked the United States in comments to the IAEA's 155-nation general conference, reflecting Iran's determination to continue defying international pressure aimed at curbing its nuclear program and nudging it toward cooperation with the IAEA inspection.

Revealing what he said were two sabotage attempts on his country's nuclear program, he challenged the perpetrators to launch new attacks, saying his country is determined to learn how to protect its interests through such assaults.

"60 Minutes" | The Spymaster: Meir Dagan on Iran's threat
Netanyahu compares Iran to Timothy McVeigh
Ex-ambassador to Israel: U.S. will go to war with Iran in 2013

The defiant speech was bound to give a greater voice to hardline Israeli leaders who say that both diplomatic efforts and economic penalties have had no effect on Iran, leaving military strikes as the only alternative to stopping it from developing nuclear weapons.

Israeli Prime Minister Benjamin Netanyahu, a proponent of such an option, made a direct appeal to American voters on Sunday to elect a president willing to draw a "red line" with Iran.

In the past week, Netanyahu has urged President Obama and other world leaders to state clearly at what point Iran would face a military attack. But Mr. Obama and his top aides, who repeatedly say all options remain on the table, have pointed to shared U.S.-Israeli intelligence that suggests Iran hasn't decided yet whether to build a bomb, despite pursuing the technology, and that there would be time for action beyond toughened sanctions already in place.

In Berlin, German Chancellor Angela Merkel described Iran as "a threat, not only for Israel but for the whole world." But she said she wants to see a "political solution" and that the international community should work together to try and find one, including the possibility of new sanctions. "The room for political maneuver is not yet exhausted," she told reporters on Monday.

Iran has often warned that any Israeli attack would trigger a devastating response, and on Monday Abbasi suggested that such strikes would not succeed in slowing down his country's nuclear program. He said without elaboration that experts have "devised certain ways through which nuclear facilities remain intact under missile attacks and raids."

Tehran denies seeking nuclear arms, and Abbasi — an Iranian vice president whom the agency suspects may have been involved in nuclear weapons research — insisted on Monday that his country's nuclear program is aimed only at making reactor fuel and doing medical research.

"The Islamic Republic of Iran ... has always opposed and will always denounce the manufacture and use of weapons of mass destruction," he said.

Tehran has long dismissed suspicions that it may re-engineer its uranium enrichment program from making reactor fuel to produce nuclear warheads and says accusations that it has worked secretly on nuclear arms are based on fabricated U.S. and Israeli intelligence. It also frequently accuses the IAEA of anti-Iran bias in its push to ensure that all of Tehran's nuclear activities are peaceful.

But Abbasi's comments Monday were the harshest on the agency itself.

"Terrorists and saboteurs might have intruded the agency and might be making decisions covertly," he said. Citing what he said was an example of sabotage on Aug. 17 at an underground enrichment plant, he said IAEA inspectors arrived to inspect it shortly after power lines were blown up.

"Does this visit have any connection to that detonation?" he asked.

It appeared to be the first mention of the alleged sabotage attack. The plant at Fordo, about 40 miles south of Tehran, is of particular concern to Israel because it is buried deep in a mountainside to protect it from assault. It also is being used to enrich uranium closer to the level needed for a nuclear warhead than what is used to power most industrial reactors, although Iran says it needs the higher level both because its present research reactor runs on the higher-grade material and because it plans to build more such reactors.

Asked by reporters to expand on the alleged sabotage attempt, Abbasi said it was foiled "by using backup batteries and diesel generators" that prevented any disruption to centrifuges used to spin uranium to enriched levels.

He also said a separate attack on the country's centrifuges — through tiny explosions meant to disable key parts of the machines — was discovered before the timed blasts could go off. Abbasi did not elaborate on the date or other details of that alleged assault attempt.

Tehran has acknowledged that the Stuxnet computer worm affected a limited number of centrifuges at its main uranium enrichment facility in the central city of Natanz two years ago. As well, assassins killed three scientists with links to Iran's nuclear programs in 2010 and 2011.

Dozens of unexplained explosions have hit the country's gas pipelines, and Iran's first nuclear power plant suffered major equipment failures delaying its operations for decades before going on line this year — delays that some experts attribute to acts of sabotage.

But Tehran says it has improved its defenses since the Stuxnet attack — a point made again on Monday by Abbasi who challenged would-be saboteurs. "We are a powerful country. We can confront any kind of industrial espionage whether it is an explosive or a virus," he told reporters. "We are eager and interested to ask the other side to have more (attacks) because having more we would be more experienced."

Inside the IAEA meeting, he said Iran now can "ward off threats by targeting ... cyber-attacks, industrial sabotage and use of explosives," without elaborating.

Beyond suggesting that the IAEA had been infiltrated, Abbasi said that anti-Iran elements are helped by the agency, even when it reports what it sees "truthfully and with absolute honesty," because "this information is easily accessible to saboteurs and terrorists through IAEA reports."

He also said U.S. pressure on Iran is the equivalent of an attack on all developing nations' nuclear rights. He called U.S.-led sanctions on Iran's oil exports and financial transactions "the ugly face of colonization and modern slavery."

"A state which has used nuclear weapons is not eligible to be present at the Board of Governors," he said, questioning the right of the United States to sit on the 35-nation IAEA board that makes agency policy.

Statements critical of Iran on Monday were voiced in more traditional terms similar to that heard at previous IAEA meetings.

U.S. Energy Secretary Stephen Chu accused Tehran of continuing "a decade-long pattern of evasion regarding questions over the nature of its nuclear program, including those related to possible military dimensions of its nuclear activities."