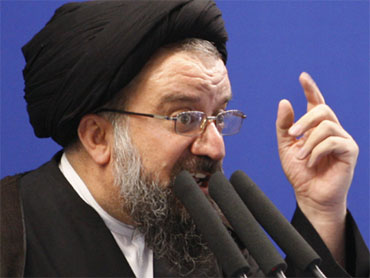 Opposition supporters, faced with a senior cleric's demand that protest leaders be severely punished or even executed, enter the third week of their campaign against the election results in increasingly tight straits.

Mir Hossein Mousavi, who claims he actually won the vote, says he will seek official permission for any future rallies, effectively ending his role in street protests.

The opposition may have little opportunity to keep momentum going within the limits of the law, and the international attention that appeared to bolster their morale could be waning. Also, Mousavi's Web site, his primary means for communicating with supporters, remained down on Saturday; an aide told the Associated Press Friday that the site had been hacked.

Mousavi said he would seek official permission for any future rallies, effectively ending his role in street protests organized by supporters who insist he won the election.

In one of the harshest statements from authorities since protests broke out after the June 12 election, Ayatollah Ahmed Khatami, a ranking cleric, said "Anyone who takes up arms to fight with the people, they are worthy of execution."

Those who disturbed the peace and destroyed public property were "at war with God" and should be "dealt with without mercy," he said Friday in a nationally televised sermon.

His call for merciless retribution for those who stirred up Iran's largest wave of dissent since the 1979 Islamic Revolution came as Mousavi slipped further from view.

"The problem is we have no one to lead us," a 30-year-old resident of Isfahan told AP on Saturday on condition of anonymity because he feared government reprisal. "We are waiting for a new message, but Mousavi does not want to continue, because after all he is part of the system."

"People are angry and afraid," he said. "They are afraid of the future and angry because they failed to achieve change with their ballots."

But they continue to shout from the rooftops at night in Tehran and Isfahan, he said. The shouting was particularly loud after ruling clerics accused protesters Friday of challenging and opposing God with their dissent.

Since the election, opposition protesters repeatedly have clashed with security forces who beat them with batons, fired tear gas and water cannons and arrested hundreds of people. At least 17 people have been killed, in addition to eight members of the pro-government Basij militia, officials have said.

The crackdown has pushed protesters off the streets, ending days of unprecedented demonstrations that saw hundreds of thousands of people demanding the election be canceled and held again.

Many supporters of Mousavi have been shouting "God is great!" from the roofs of their homes — a practice dating to the 1979 Islamic Revolution — to register discontent with the regime.

Members of the Basij have been raiding homes and beating residents in an attempt to stop the chanting, Human Rights Watch said Saturday. The group also said that authorities were seizing satellite dishes to prevent citizens from seeing news broadcast from overseas.

Iranian officials have blamed the BBC, Voice of America and other news channels for fomenting unrest on behalf of Western governments.

"While most of the world's attention is focused on the beatings in the streets of Iran during the day, the Basijis are carrying out brutal raids on people's apartments during the night," said Sarah Leah Whitson, the group's Middle East director. "Witnesses are telling us that the Basijis are trashing entire streets and even neighborhoods as well as individual homes trying to stop the nightly rooftop protest chants."

Amnesty International called the prospect of quick trials and capital punishment for some detainees "a very worrying development." It said Iran was the world's No. 2 executioner after China last year, with at least 346 known instances of people put to death. The group also called on the regime to release dozens of detained journalists it said faced possible torture.

As the protests dwindle amid intensifying official pressure, the opposition may suffer from a decline in international attention. The protests and violence dominated Western news broadcasts for nearly two weeks, with the reports substantially bolstered by videos gleaned from Internet sites and by commentary from social networking sites.

Such sites were a key pipeline for the opposition amid the tight restrictions on foreign media in the country.

But along with the diminished action on the streets in Iran, other stories have arisen to siphon away attention — especially the death of pop star Michael Jackson.

Television coverage of Iran's turmoil has fallen since Jackson's death Thursday; on the Twitter micro-blogging site, Iran remained among the most discussed topics, but fell below Jackson and comments about the movie "Transformers 2."

Ahmadinejad Lashes Out Again At Obama

Iran's hardline president lashed out anew at the United States and President Barack Obama on Saturday, accusing him of interference and suggesting that Washington's stance on Iran's postelection turmoil could imperil Obama's aim of improving relations.

"We are surprised at Mr. Obama," Mahmoud Ahmadinejad said in remarks to judiciary officials broadcast on state television. "Didn't he say that he was after change? Why did he interfere?"

"They keep saying that they want to hold talks with Iran ... but is this the correct way? Definitely, they have made a mistake," Ahmadinejad said.

President Obama was strongly criticized at home and by many abroad, for his initial measured response to opposition allegations that Ahmadinejad was re-elected by fraud in the June 12 balloting and to the harsh crackdown on protesters.

But on Friday, he hailed the demonstrators in Iran and condemned the violence against them.

"Their bravery in the face of brutality is a testament to their enduring pursuit of justice," Mr. Obama said. "The violence perpetrated against them is outrageous. In spite of the government's efforts to keep the world from bearing witness to that violence, we see it and we condemn it."

In a separate show of defiance of international opinion, Foreign Ministry spokesman Hasan Qashqavi was quoted by the official news agency IRNA as accusing the Group of Eight countries — including the United States — of "intervening and hasty remarks." G-8 foreign ministers on Friday called for an end to the violence in Iran and urged the authorities to find a peaceful solution.

The Foreign Ministry also summoned Sweden's ambassador to protest a break-in by demonstrators at Iran's embassy on Friday, IRNA reported.