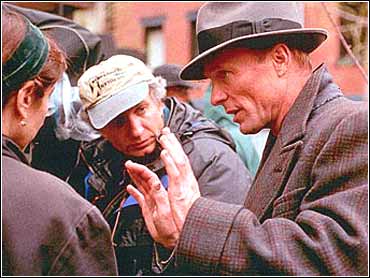 They called him "Jack the Dripper," those critics of abstract expressionism who wanted painting to be about something more than just itself.

Violent, charmless, alcoholic, manic-depressive, he did it his way, and his way killed him at age 44. Ed Harris, who directs and also stars in a very smart new movie about the Action painter, looks so much like him that an Oscar nomination was probably
inevitable.

The first to suspect that Pollock was up to something special in the 1940s was another artist, Lee Krasner (played by Marcia Gay Harden, also nominated for an Oscar she deserves to win) who no sooner knocks on his Greenwich Village door than she moves in -- and later insists on marriage, but is, at least, shrewd enough to refuse to have his child.

From the biography that inspired the film, we know one of Pollock's biggest problems was his working-class mother (played by Sada Thompson). But director Harris lets us fill in the blanks ourselves at a scary family meal.

In what's probably New York City's Cedar Tavern, we meet several of the other Action painters who become famous in the '50s, including John Heard as Tony Smith and Val Kilmer as Willem de Kooning. But almost as important to Pollock's career as Krasner is the philanthropic Peggy Guggenheim, played to frumpy perfection by Harris' real-life wife, Amy Madigan.

For Peggy, he paints the famous Guggenheim Mural -- after which, in East Hampton, with the booze and the mistress and the demons, he teaches himself to slash and burn.

As good as the acting is in Pollock, the action-painting is even better, a kind of gaudy grammar. The critics were full of nouns. Pollock, as we see here, was ll verbs.

Sure, there was something sullen and sneering about it, and something excessive, too. But the 50s were just as excessive as any decade that came later, with the birth of the Beats, and rock-and-roll, and hydrogen bombs. If the painters like Pollock were self-destructive, so were the poets, with their loony bins and suicides. And so were the jazz musicians strung out on heroin.

And it seems to me that there was also something complicit about our celebration of their excess. We egged them on. They were the fuel we burned.