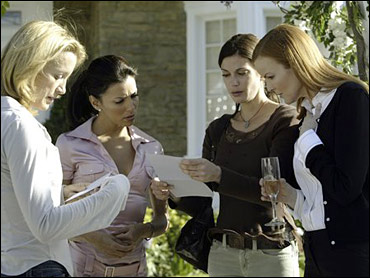 This column from The Nation was written by Robert Scheer.

What does it mean that a whopping 70 percent of Americans, according to a recent "New York Times"-CBS News poll, believe that mass culture is responsible for debasing our moral values? It means, if the poll is accurate, that we are a nation of lascivious hypocrites. In fact, the lure of sin, as represented by Hollywood and the entertainment industry, is as tempting to Americans today as apples ever were to Adam and Eve.

Whether in Utah, Georgia or New York, the TV ratings show that we are choosing the equivalent of fast-food entertainment over quality programming. Sex and violence sell well everywhere; high culture does not. So the entertainment titans keep dishing up more of the same.

The top two shows in the nation right now are a grisly crime serial and a cynical and sex-soaked demolition of life in the suburbs, and both are beloved in both red states and blue.

In the Atlanta market, for example, "Desperate Housewives" is the No. 1 show, while in Salt Lake City, the gory "CSI" franchise dominates local TV sets, with "Housewives" placing a respectable fourth. Both regions backed President Bush solidly, giving him 58 percent and 72 percent of the vote, respectively. In other words, we have met the enemy and it is us. If anything is to blame for what appears on our screens it is the free market, a deregulated and hypercompetitive mediascape where a right-wing mega-capitalist like Rupert Murdoch can simultaneously make millions off satires like "Married With Children" and "The Simpsons" and a right-wing news channel that wraps itself in the very "God, country, family" tropes that those satires so crassly yet cleverly spoof.

Yet even some liberals have apparently bought the Big Lie, spewed with a vengeance throughout this election year, that a liberal, permissive, secular, coastal culture has perverted the otherwise pristine heartland of our nation. In reality, what we have here is Econ 101: supply and demand. Adam Smith's invisible hand, combined with mass media technology, now allows the best that humanity has to offer to compete with the lowest common denominator. And guess what is winning.

On rare occasions, the good triumphs. Religious censors, for example, would have killed D.H. Lawrence's exquisite depiction of Lady Chatterley's affair with her gamekeeper if he hadn't been able to find printers who valued cash over the church's approval. Today, however, the admixture of greed and art allows "Desperate Housewives" to cash in on the same sex-with-a-hireling story line, with more cleavage and far less sincerity. Catering to our base desires also finds us eagerly paying for video games in which one can spend the afternoon slaughtering innocents and monsters alike, while our prime-time television is dominated by "Survivor"-style shows whose logical conclusion seems to be Piggy's execution by the mob in "Lord of the Flies."

But hey, to each his own, right? Personally, I could do without ever again hearing jingoistic country songs like Toby Keith's hit that warned the world: "You'll be sorry that you messed with the U S of A/ 'Cause we'll put a boot in your ass / It's the American way." But I'd never ask for such drivel to be banned.

The bottom line of capitalism is that if somebody will buy it, somebody will make it. Yet instead of insisting that cultural consumers take personal responsibility for the choices they make -- or, better yet, providing new resources for public education and nonprofit media -- the professional tsk-tskers feign outrage at the sullying of televised football with Janet Jackson's breast or a naked Desperate Housewife jumping into the arms of an NFL player.

Worse, these national moralists -- dominated these days by evangelical Christians -- politicize the issue by blaming "liberal Hollywood" for what deregulation and the free market have wrought. Never mind that Arnold Schwarzenegger made all those violent movies, it is the Democrats and their ilk who are corrupting youth by promulgating our "relativistic" morality. But that's just bunk. The real engine at work here, for better or worse, is the profit motive. If this patently obvious point is absent from the complaints of social conservatives, it is because the truth of the matter is inconvenient to their agenda.

It's much easier for them to politicize the moral decay of our culture than to admit that its wellspring is the domination of media corporations, along with the rampant consumerism that has led us deep into personal debt. Let's face it: There's not much money to be made off children's piano recitals, songs sung around the campfire or performances by your local orchestra, but the choice to consume such fare is always there.

So if you're upset with what's on the boob tube tonight, just ask yourself: What would Jesus watch? My guess is PBS.

Robert Scheer, a Nation contributing editor, is also a contributing editor and columnist for the "Los Angeles Times" and the author, with Christopher Scheer and Lakshmi Chaudhry, of "The Five Biggest Lies Bush Told Us About Iraq."

By Robert Scheer
Reprinted with permission from The Nation