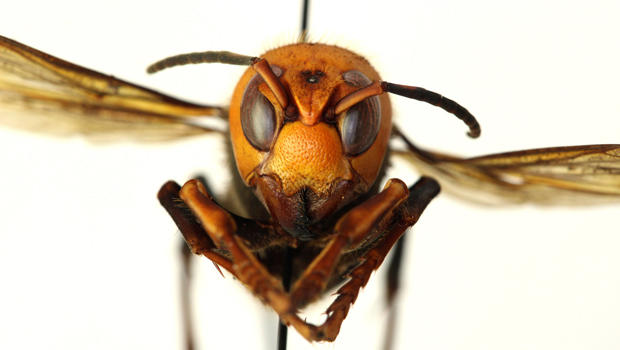 He and his kids even name some of the queens: "I'm not sure that I want to say on national TV, but some of the names are, like, Bee-yoncé. Our favorite one this year was Queen Eliza-buzz. Just silly names!"

Which is why, it was so upsetting for him when he found one of his favorite, most productive hives had been slaughtered.

"That particular colony had a good 60,000 bees in it," he said. "They killed all the workers, the drones, the queen. They slaughtered every last bee in the entire colony."

The likely culprit? The Asian giant hornet, which you may have also heard called the "murder hornet."

"Whenever they find a beehive, they will slaughter all the bees, go inside the beehive and then rip out the pupa and rip out the bee larva," McFall said. "And then they will fly that back to their own young and feed that to their young."

Correspondent Luke Burbank said, "I mean, I know nature is violent, but that's, like, horror-movie violent."

"Yeah, it is total horror movie violence. And it's not like the bees are able to mount a defense, because our Western honeybees are totally helpless against this predator."

Scientists think the hornets hitched a ride over to North America on a cargo ship. And Chris Looney, the entomologist in charge of exotic pests at the Washington State Department of Agriculture, is hoping they don't get too comfortable here.

"They have one of the more painful stings that's known to humankind," he said. "Their jaw can actually take a chunk of flesh out of a human body. Yeah, if they bite you they can take a little divot of skin out. They use those jaws most of the time for mashing up other bugs and turning them into the meat balls that they take back to feed their larvae. I guess you'd be hard pressed to decide which you're more worried about. If one lands on you, is it going to bite me or sting me?"

With five confirmed hornets found in Washington State, Looney and his colleagues are trying to figure out how to spot the hornets' underground nests and eradicate them before they start reproducing in large numbers.

"We're experimenting right now with infrared cameras essentially to see if we can locate those nests in the ground," said Looney. "The nest will stay at about 87 to 90 degrees Fahrenheit. So, in the cool Pacific Northwest mornings, they should stand out to some degree. We are in talks right now with researchers at University of Washington to see if we might be able to use radio transmitters or radio tags as a way to follow them back to their nest."

Yes, that's right: These hornets are so large – up to 2½ inches long – that you can actually attach a radio transmitter to them.

To eradicate the Asian giant hornet hives, Looney and his colleagues will have to wear special hornet-proof suits, because the hornet's stingers are so long they can sting through regular bee suits.

Looney said, "This is great. It will protect us from being stung, but you can imagine it's really hard to maneuver in this."

First, though, they have to find them. So, they've enlisted the help of regular folks – citizen scientists, like Emily Neely, of Burien, Washington – to make traps with OJ and rice wine and hang them in their backyards, then report what they find.

Washington officials say if you live in the state and you see a giant hornet, you should take a picture of it on their phone and submit it, but otherwise leave the insect alone.

The nickname "murder hornets" appears to have come from a possible mis-translation from Japanese, which went viral after it was used in a New York Times article.

If you talk to Chris Looney, or any other scientists, though, they'll tell you they're not really fans of the name. "'Murder hornet' doesn't work, for a couple of reasons," said Looney. "One of them, it exaggerates the human health risk. These are human health risks, but like I said, we don't want to be stung by one. If you're allergic to one, obviously, that can be really dangerous. And even if you're not allergic, multiple stings certainly can lead to being hospitalized and sometimes rarely even death. But it turns out it's not that many people that die from this any given year in the places where it's native."

Fall brings the giant hornet's mating season in the Pacific Northwest, and Ted McFall is doing everything he can to protect his remaining honeybees. "To think that there's this terrible creature that's in the woods that's gonna come out and attack them on any day. So, I feel like it's a bit of a race for us to find them and find their nest and destroy them before they destroy our honeybees," he said.

He's experimenting with different types of bait, like cat food, and checks on his hives regularly.

And as an absolute last resort, he's even stashed one his daughter's tennis rackets in a bag near his traps. "You know, back in high school, I had a pretty good serve!" McFall said. "I haven't played tennis since then. But, yeah, that's a way that I may decide to fight the hornets this way."

Desperate times call for desperate measures, in the ongoing battle between man and terrifying beast.