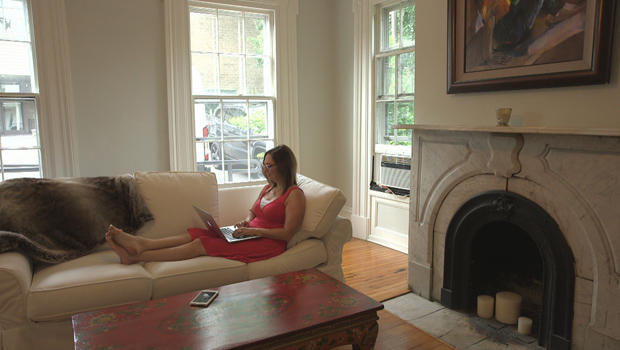 Folk wisdom suggests that OPPOSITES ATTRACT, and sometimes they do. But our relationships with others aren't always so predictable. Our Cover Story is all about personality, and it's reported by Faith Salie:

When Bryan Baecker first laid eyes on Randi Johns in Sacramento, California, two years ago, it was love at first sight.

"Yeah, that happened pretty much like that," said Johns.

We'd like to tell you it was a match made in heaven, but, as Johns said, "It felt like we were communicating on different levels, like, completely."

According to Baecker, "A lot of times we were talking at each other, and she was probably doing a better job of listening than I was."

Gargoyles and grotesques get their closeup

​Isla Vista shooting witness: "I looked into his eyes"

While all couples have their ups-and-downs, for Johns, their problems seemed insurmountable: "I felt sort of exhausted from just being in a relationship [with Bryan]," she said.

"My personality, it's high energy and in-your-face," said Baecker, "but it also tends to be impulsive."

Johns told Baecker she needed space: "If he sees a problem, he immediately, like, attacks it. And I kind of was like, 'Just stop.'"

So, they split up. It all boiled down to a clash of personality. Baecker described himself far in the "extrovert" camp, while Johns says she always considered herself an introvert.

Understanding personality types can get complicated. Simply put, extroverts tend to be charismatic, while introverts are quiet types. Extroverts are hailed as "good talkers"; introverts, on the other hand, are usually the ones listening. While extroverts recharge their batteries through interaction with others, introverts re-energize when they're alone.

Author Susan Cain wrote a best-seller that struck a chord by bringing attention to the oft-misunderstood introvert.  "Introverts contribute so much to society because of who they are, not in spite of who they are," Cain said, "and yet we're encouraging everyone to be one way and not the other way."

The success of Cain's book, "QUIET: The Power of Introverts in a World That Can't Stop Talking," led to a TED Talk speech, which today has more than 19 million hits.

Now Cain leads a movement she calls the "Quiet Revolution."

Why is such a revolution needed?  "You have this huge percentage of the population, who are suddenly discounted for something that goes to the core of who they are," Cain replied.

"The culture of character was in the 19th century when we lived in small towns alongside people that you'd pretty much known all your life," Cain said.

"And so, people could judge each other in terms of who the other person really was. But then in the 20th century, when you had industrialization and people moving out into the cities, suddenly they're living alongside strangers who they needed to impress really quickly.

"What became important is, what kind of first impression do you make?"

So, in a culture that has long favored the charisma and likability of the extrovert, the introvert has been left on the sidelines.

"If you went through the thousands and thousands of letters that I get, the word you would see most frequently is the word 'permission.' Finally I have permission to be who I am," Cain said.

When asked if, in the shift towards understanding introverts, extroverts will ever get shushed at the conference table, author and psychologist Scott Barry Kaufman said, "I could see it actually, honestly, being like a 'revenge of the introverts.'"

Kaufman, a professor at the University of Pennsylvania, has made a career of studying creative intelligence and personality traits.

"One of the most exciting findings in modern personality science is that all of our personality traits can change," Kaufman said. "Let's say we're an extrovert and our work environment is surrounded by introverts; actually the extroverted tend to become more introverted, and vice versa."

Salie asked Cain, "What are the biggest myths about introverts?"

As for the extroverts?  Facebook's Sheryl Sandberg says she is one; so do former Presidents Bill Clinton and George W. Bush, and founder of Black Entertainment Television Robert Johnson.

The main difference is style.  Extroverted leaders are strong motivators, quick on their feet. Introverted leaders prefer to think things through before speaking up or moving forward, which is often misconstrued for shyness, even disinterest.

"When introverts aren't supported, what do we miss out on?" asked Salie.

"We're missing out on, well, half the population, to begin with," Cain said. "Introverts tend to be passed over or not groomed in the first place for leadership positions. And that's one of the things that we really want to fix."

That's why Cain has taken her show on the road, speaking to students and business leaders about how to bring the best out of their introverts. "It's not like one is better than the other; it's just that they're different, and we really need them both," she said.

And, says Scott Barry Kauffman, this is true in most aspects of our lives. In personal relationships, he said, "over the long haul, both partners do tend to kind of meet each other in the middle somewhere. But at kind of the earliest stages of relationships, you can have, like, a very extroverted partner [and] introverted partner. And they can make a really great match, because they kind of are seeing something in each other that they don't have."

Bryan Baecker and Randi Johns may have learned that the hard way. Baecker said, "When she broke up with me, that was a huge moment in my life where I said, 'This is the best thing that's ever happened to me; I don't want this to end."

Lo and behold, when Susan Cain spoke at Baecker's workplace, he got the opportunity to share how her book changed his life: "I was reading it, I was like, 'Oh my God, this is why we're talking at each other and not to each other.' Like, I need to listen to her. I need to shut up and let her talk!"

This wasn't just a journey of understanding for Baecker; Johns had her own awakening during their split, especially when Bryan told her he was moving to Seattle to start a new job.

"Then suddenly it hit me, and I was like, 'Whoa, he just gave me the ultimate: space. I just like fell apart and, like, saw all these other things that, like, he contributed to my life and, like, brought out in me."

And that's how opposites can move beyond mere attraction. "Just because Randi's an introvert doesn't mean she's shy or timid," he said. "I mean, she's strong and courageous, and in some respects fearless."

Shortly after our interview, Bryan asked Randi to marry him. She said, "yes." This time, he heard her loud and clear.