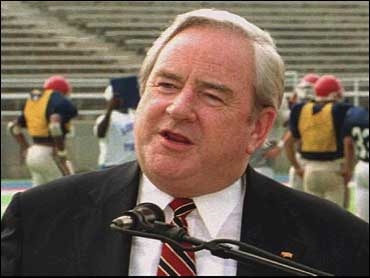 Former visitors to the Web sites jerryfalwell.com and jerryfallwell.com are in for a surprise if they click back there today.

Instead of serving up parodies of the well-known televangelist, as the Web sites using those names have been, visitors will instead get the real thing: the official site of Jerry Falwell Ministries, complete with Bible quotations and a thought for the day.

It's a long-awaited relief for the Christian fundamentalist minister, who has been battling an Illinois man for over a year for the rights to the two Internet domain names.

Falwell says this week, he finally won the rights to the two domain names after threatening to again sue the man who set up the parody Web sites.

He is identified as Gary Cohn of Highland Park, a Chicago suburb.

The TV evangelist had been trying to gain legal rights to the domains since early last year, when he filed a complaint with the World Intellectual Property Organization. That agency ruled against him.

Falwell later sued Cohn in federal court in Virginia, contending that the Web sites were libelous and an instance of illegal cybersquatting. That lawsuit was dismissed in March on jurisdictional grounds. Falwell was threatening to file suit in Illinois.

Falwell said that after the Virginia suit was dismissed he and his lawyers discovered the name Jerry Falwell had been trademarked with Falwell's talk show "Listen America" several years ago.