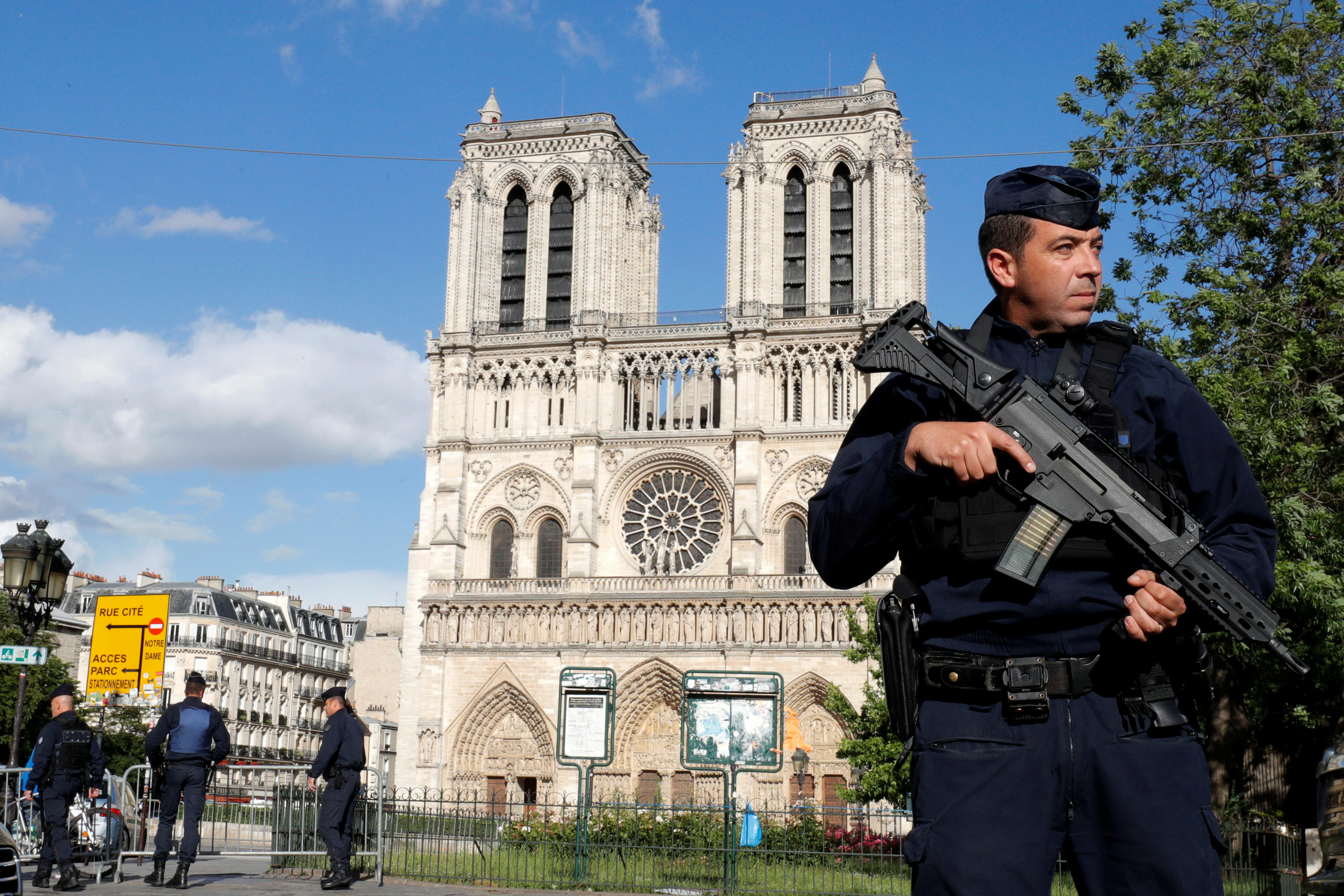 PARIS -- The hammer-wielding man who attacked police officers patrolling in front of Notre Dame Cathedral appears to have radicalized himself through the internet and was unknown to French police and intelligence services, the chief prosecutor in Paris said Saturday.

Francois Molins said the 40-year-old Algerian doctoral student is being charged with attempted murder in connection with a terrorist enterprise and crime of terrorist conspiracy. One police officer was slightly injured in Tuesday's attack.

The assailant -- crying out "This is for Syria!"-- was shot by police. He received hospital treatment for a shotgun injury to the torso.

At least 600 people were blocked inside the iconic 12th century church while police secured the streets around it and combed the pews while visitors sat with their hands raised for the check. Others fled in panic from the sprawling esplanade outside the cathedral.

Molins told a news conference Saturday that the man had the "profile of a neophyte" that counterterrorism services fear as much as extremists who are trained to carry out attacks.

"Today, the terrorist threat today is shape-shifting. And this time we have been confronted by an internal threat... individuals who want to carry out projects here when they have difficulties joining the war zones," Molins said.

The assailant was identified as Farid Ikken this week by a nephew in Algeria, lawyer Sofiane Ikken, and a friend, Algerian journalist Kamal Ouhnia.

Molins, who hasn't identified the suspect by his full name, confirmed that he was an ex-journalist born in Akbou, a town in northern Algeria, who was legally living in France as a student working on his doctoral thesis.

Investigators who searched a student residence where he lived in the Paris suburb of Cergy-Pontoise found a declaration of allegiance to the Islamic State of Iraq and Syria (ISIS) he filmed on the morning of the attack. He presented himself as a "soldier of the caliphate," prosecutors said.

They have also found a laptop and four USB sticks that included Islamic extremist propaganda, photos and videos referring to attacks in London, Paris, Brussels and at a church in the French region of Normandy, and images of the war in Syria.

The man described himself as a Sunni Muslim who started a "quite radical" religious observance about 10 months ago, Molins said.

The suspect bought the hammer and two kitchen knives, which were found on him after the attack, in a supermarket on March 27.

Molins said his family and friends didn't notice signs of radicalization. He described the man as socially and psychologically "isolated."

Investigators haven't established the existence of any contact between the man and people living in Syria and Iraq.

The youngest of a family of 12 children, the assailant moved to Sweden in 2001, where he studied journalism. He returned to Algeria in 2011, establishing an online newsletter and working as a journalist, before moving to France for doctoral studies in 2013, Molins said

His brother and a cousin, both living in France, have described a "solitary, serious, discreet" man from a not very religious family. His thesis supervisor, who last saw him in June 2016, described him as a "strong advocate of Western democracy," the prosecutor said.