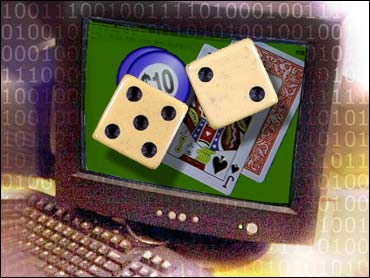 Two founders of a company that processes Internet gambling transactions were arrested and charged with laundering billions of dollars in gambling proceeds, federal prosecutors announced Tuesday.

The prosecutor said the men knew when they took their company public that its activities were illegal.

"Blatant violations of U.S. law are not a mere 'risk' to be disclosed to prospective investors," Garcia said. "Criminal prosecutions related to online gambling will be pursued even in cases where assets and defendants are positioned outside of the United States."

Lefebvre and Lawrence were charged in connection with the creation and operation of an Internet payment services company that facilitated the transfer to billions of dollars of illegal gambling proceeds from U.S. citizens to the owners of overseas Internet gambling companies.

In 1999, the men founded Neteller, which is based in the Isle of Man and is publicly traded in the United Kingdom.

Prosecutors cited Neteller's 2005 annual report in saying that Lawrence and Lefebvre enabled the company to provide payment services to more than 80 percent of worldwide gaming merchants.

Lawrence left the company's board of directors in October while Lefebvre left in December 2005, prosecutors said. Together, the men owned as much as 35 percent of the company's outstanding shares.

Garcia noted that the company acknowledged when it went public that U.S. law prohibits people from promoting certain forms of gambling, including Internet gambling, and transmitting funds that are known to have been derived from criminal activity.

Lefebvre and Lawrence also conceded in the company's offering documents that they were risking prosecution by the U.S. government, he said.

Prosecutors said Neteller in 2005 alone processed more than $7.3 billion in financial transactions, 95 percent of which was derived from money transfers involving Internet gambling.

Lawrence and Lefebvre, both charged with conspiring to transfer funds with the intent to promote illegal gambling, could face a maximum of 20 years in prison if convicted.