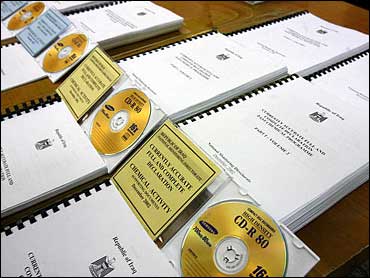 Two Army analysts whose work has been connected to a major intelligence shortcoming on Iraq have received awards for job performance over the last few years, according to officials.

The two civilian analysts work at the Army's National Ground Intelligence Center — one of three U.S. agencies criticized by the presidential commission that probed U.S. intelligence on Iraq.

The Pentagon, in a written statement, told The Washington Post the awards for the analysts were to recognize their overall contributions on the job over the course of each of the past three years, and that "supervisors were encouraged to reward individuals on the basis of their annual contributions."

The analysts are former military men who are experts on foreign and U.S. weaponry.

Their work has been cited as part of a key intelligence failure on Iraq — the claim that aluminum tubes sought by the Baghdad government were most likely meant for a nuclear weapons program rather than for rockets.

The commission deemed their agency's assessment of the aluminum tubes as a "gross failure." The agency was "completely wrong," the panel said, when it judged in September 2002 that the tubes Iraq was purchasing were "highly unlikely" to be used for rocket motor cases because of their "material and tolerances."

The panel found that aluminum tubes with similar tolerances were used in a previous Iraqi rocket, the Nasser 81, and that the International Atomic Energy Agency had published details about the system in 1996, as did the Energy Department in 2001.

The panel's report said "the two primary NGIC rocket analysts said they did not know the dimensions" of the older Nasser 81 rocket and were unaware of the IAEA and Energy Department reports. The report did not name the analysts, but officials told The Post that the panel was referring to George Norris and Robert Campos.

When contacted by the Post, Norris deferred all questions to his superiors and said a request for comment from Campos would get the same response.