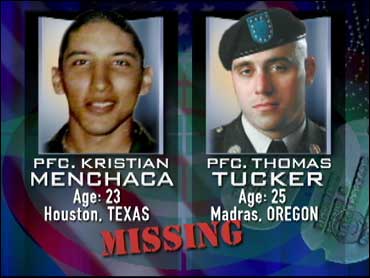 The Mujahedeen Shura Council, an umbrella organization for a variety of insurgent factions led by al Qaeda in Iraq, offered no video, identification cards or other evidence to prove that they have the Americans. The group had vowed to seek revenge for the June 7 killing of Abu Musab al-Zarqawi, the leader of al Qaeda in Iraq, in a U.S. airstrike.

A massive manhunt is under way for the missing soldiers — it is a sweeping operation of 8,000 U.S. and Iraqi troops, CBS News correspondent Lee Cowan reports. Search teams are themselves under attack: at least seven U.S. soldiers have been wounded since the rescue effort began.

In a second statement issued minutes after the first, the same group claimed responsibility for the kidnapping of four Russian Embassy workers and the killing of a fifth in Baghdad on June 3.

In the statement, the council taunted U.S. forces for failing to find the two American soldiers, who went missing Friday during an attack on their checkpoint in a Sunni district south of Baghdad.

The attack has been described by Pentagon officials as taking place when a squad of soldiers was manning a checkpoint at a bridge. When they started taking fire from insurgents, CBS News national security correspondent David Martin reports, part of the squad set off in pursuit, leaving three soldiers alone at the checkpoint. One was found dead, and the only sign of the other two was a trail of bloody footprints leading away from the humvee.

Kidnappings of U.S. soldiers have been rare in Iraq, Cowan reports. The last time it happened was April 2004, when Sgt. Keith Maupin's fuel convoy was ambushed near the Baghdad airport.

"I was 95 percent sure he was one of them," Menchaca's brother, Julio Cesar Vasquez, of Houston, told The Associated Press late Sunday. "I already had an idea because he was at a checkpoint."

Menchaca's wife, 18-year-old Christina Menchaca, of Big Spring, Texas, said military representatives told her Saturday they were taking "every means possible to find him," she said.

The statement dealing with the Russians gave the Moscow government 48 hours to withdraw from Chechnya and to release all "our sisters and brothers in the Russian prisons."

Meanwhile, the U.S. military said earlier Monday that seven American troops have been wounded, three insurgents have been killed and 34 detained during an intensive search for two missing American soldiers.

Maj. Gen. William Caldwell, a spokesman for U.S. forces in Iraq, said fighter jets, unmanned aerial vehicles and dive teams had been deployed to find the two men missing since Friday during an attack on their checkpoint in the volatile Sunni area south of Baghdad that left one of their comrades dead.

"We have surged intelligence, surveillance and reconnaissance platforms and employed planes, boats, helicopters and UAVs to ensure the most thorough search possible on the ground, in the air and in the water," Caldwell said in a statement issued Monday.

He did not comment on reports that the two men had been seized by insurgents, saying only that they were listed as "duty status and whereabouts unknown." He said seven other U.S. service members had been wounded in action during the search efforts that began Friday night.

Caldwell said more than 8,000 U.S. and Iraqi troops were participating in the search.

"While searching for our Soldiers, we have engaged in a number of significant actions against the anti-Iraqi forces," he said, adding that three insurgents had been killed and 34 taken into custody.

He also said the military had received 63 tips and had launched 12 cordon and search operations, eight air assaults and 280 flight hours were logged.

"Approximately 12 villages have been cleared in the area, and we continue to engage local citizens for help and information leading to the whereabouts of our soldiers," he said, without elaborating.

Cowan reports that the search has been hampered in part by uncooperative and often violent residents in the area, known as an insurgent strong-hold.

Witnesses reported seeing the men led away by masked gunman, Cowan reports, but so far, no insurgent group has claimed responsibility. Over the weekend, an Iraqi farmer said he saw seven heavily armed gunmen capture the two American soldiers during an attack on a road checkpoint south of Baghdad.

The White House, meanwhile, has promised to do everything it could to find the soldiers and said it had a message for anybody who may have taken the two men: "Give them back."

What puzzles military officials about the soldier's disappearance is why the team seemed so isolated at the time of the attack. U.S. commanders say it would only be under extraordinary circumstances that a US patrol would split up.

But CBS News has been told that the Humvee from where the men disappeared was at a canal crossing at the time of the attack. They were separated by a couple hundred yards from their nearest U.S. colleagues — who were at a checkpoint to the northeast. Military officials don't know why they may have been that far away from a checkpoint alone — but they're casting doubt on witnesses who say that the doomed soldiers were left there after the other U.S. soldiers sped off in pursuit of the attackers.