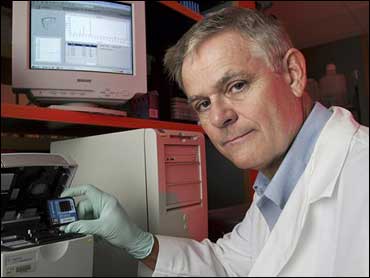 A U.S. border inspector who allowed an Atlanta lawyer infected with a dangerous strain of tuberculosis back into the country, disregarding a computer warning to stop the man and don protective gear, has been removed from border duty, officials said Thursday.

The unidentified inspector explained that he was no doctor but that the infected man seemed perfectly healthy and that he thought the warning was merely "discretionary," officials briefed on the case told The Associated Press. They spoke on condition of anonymity because the matter is still under investigation.

The patient was identified as Andrew Speaker, a 31-year-old personal injury lawyer who returned last week from his honeymoon in Europe. His new father-in-law, Robert C. Cooksey, is a U.S. Centers for Disease Control and Prevention microbiologist specializing in TB and other bacteria.

Speaker is now under quarantine at a hospital in Denver. He is first infected person to be quarantined by the U.S. government since 1963.

Speaker will stay in a room with specially designed ventilation to prevent germs from escaping, and doctors will try as many as five different antibiotics first, reports CBS News correspondent Kelly Cobiella. If that doesn't work, they'll resort to surgery.

Cooksey would not comment on whether he reported his son-in-law to federal health authorities. Nor did the CDC explain how the case came to their attention. However, Cooksey said that neither he nor his CDC laboratory was the source of his son-in-law's infection.

The disclosure that the patient is a lawyer — and specifically a personal injury lawyer — outraged many people on the Internet and elsewhere. Some travelers who flew on the same planes with Speaker angrily accused him of selfishly putting hundreds of other people's lives in danger.

"It's still very scary," 21-year-old Laney Wiggins, one of more than two dozen University of South Carolina-Aiken students who are getting skin tests for TB. "That is an outrageous number of people that he was very reckless with their health. It's not fair. It's selfish."

Speaker had told The Atlanta Journal-Constitution that he knew he had TB when he flew from Atlanta to Europe in mid-May for his wedding and honeymoon, but that he did not find out until he was already in Rome that it was an extensively drug-resistant strain considered especially dangerous. He said that doctors initially did not order him not to fly and only suggested he delay his wedding.

Despite later warnings from federal health officials not to board another long flight, he decided to fly to Canada and sneak back from there to the U.S. instead of flying, believing he would not survive if he did not reach the U.S., he said.

He was quarantined May 25, a day after he was allowed to pass through the border crossing at Champlain, N.Y., along the Canadian border.

The inspector ran Speaker's passport through a computer, and a warning — including instructions to hold the traveler, don a protective mask in dealing with him, and telephone health authorities — popped up, officials said. About a minute later, Speaker was instead cleared to continue on his journey, according to officials familiar with the records.

The Homeland Security Department is investigating.

"The border agent who questioned that person is at present performing administrative duties," said Homeland Security spokesman Russ Knocke, adding those duties do not include checking people at the land border crossing.

Colleen Kelley, president of the union that represents customs and border agents, declined to comment on the specifics of the case, but said "public health issues were not receiving adequate attention and training" within the agency.

On Thursday, a tan and healthy-looking Speaker was flown from Atlanta to Denver, accompanied by his wife and federal marshals, to Denver's National Jewish Medical and Research Center, where doctors planned to isolate him and treat him with oral and intravenous antibiotics.

Dr. Charles Daley, chief of the hospital's infectious-disease division, said he is optimistic Speaker can be cured because he is believed to be in the early stages of the disease.

"By conventional methods that we traditionally use in the public health arena ... he would be considered low infectivity at this point in time," she said. "He is not coughing, he is healthy, he does not have a fever."

Doctors hope also to determine where he contracted the disease, which has been found around the world and exists in pockets in Russia and Asia.

"He may not leave that room much for several weeks," hospital spokesman William Allstetter said.

Speaker's father-in-law has worked at the CDC for 32 years and is in the Division of Tuberculosis Elimination, where he works with TB and other organisms. He has co-authored papers on diabetes, TB and other infectious diseases.

"As part of my job, I am regularly tested for TB. I do not have TB, nor have I ever had TB," he said in a statement. "My son-in-law's TB did not originate from myself or the CDC's labs, which operate under the highest levels of biosecurity."

In a brief telephone interview with The AP, Cooksey said that he gave Speaker "fatherly advice" when he learned the young man had contracted the disease.

"I'm hoping and praying that he's getting the proper treatment, that my daughter is holding up mentally and physically," Cooksey said. "Had I known that my daughter was in any risk, I would not allow her to travel."

According to a biography posted on a Web site connected with Speaker's law firm, the young lawyer attended the U.S. Naval Academy, and recieved his undergraduate and law degree from the University of Georgia. He is in private practice with his father, Ted Speaker, an unsuccessful candidate for a judgeship in 2004.

His wife, Sarah, is a third-year law student at Atlanta's Emory University.

Speaker's father told WSB-TV: "The way he's been shown and spoken about on TV, it's like a terrorist traveling around the world escaping authorities. It's blown out of proportion immensely."

Health officials in North America and Europe are now trying to track down about 80 passengers who sat near him on the two trans-Atlantic flights, and they want passenger lists from four shorter flights he took while in Europe.

However, other passengers are not considered at high risk of infection because tests indicated the amount of TB bacteria in Speaker was low, said Dr. Martin Cetron, director of the CDC's division of global migration and quarantine.

Health law experts said Speaker could be sued if others contract the disease.

A recent study found that 25 states would run out of hospital beds within two weeks of even a moderate pandemic flu outbreak, Cordes reports, and most hospitals don't have facilities to keep infectious patients separate from everyone else.