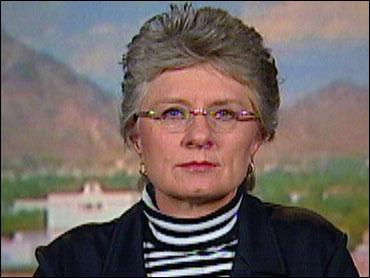 The still-unfolding drama at the polygamist compound in Eldorado, Texas is focusing renewed attention on the world of polygamy.

Some 200 women and children were removed Friday and Saturday from a compound built by polygamist leader Warren Jeffs after a 16-year-old girl complained of abuse. State troopers were looking for evidence of a marriage of the girl, who is said to have had a baby at 15, and 50-year-old Dale Barlow. Girls younger than 16 cannot marry under Texas law, even with parental approval.

On The Early Show Monday, co-anchor Julie Chen spoke with Laurie Allen, who was born into polygamy and escaped at age 30.

Her documentary, "Banking on Heaven," exposes the struggles women and children face in a polygamist sect.

"(Polygamy is) a life where, as a female, you really don't think for yourself, you're basically told what to do. You really are just a breeding machine to further the agenda of the male patriarchy," Allen told Chen. "This is what I experienced.

"And it's just a very oppressive environment -- or repressive. You know, you don't get education. I never finished the fourth grade growing up. So, when you do finally get the wherewithal to get out, it takes about 20 years to really transition into the outside world and to discover your own identity, because you've been taught all your life to just do what you're told."

At what age do women start thinking there's something very wrong about that type of life?

"You really don't," Allen replied. "There aren't that many women -- and unfortunately, women are the most difficult to transition out because of the Stockholm syndrome (in which) we tend to sympathize with our perpetrators.

"And it's much more difficult to transition a female out than it is a male. The males have more independence. They really are the kings. So, women have a much tougher time with that. It does take an average of 20 years. It is very, very difficult."

The women and children removed from the compound in Eldorado are almost certainly terrified, Allen says, "because they are taught from birth, especially in the FLDS (Fundamentalist Church of Jesus Christ of Latter Day Saints), that outsiders or the agents of Satan, they're evil. They're not even supposed to have any contact with outsiders.

"So, I just hope that they've got trained people in Texas, psychologists, therapists who know how to deal with this type of mind control, because these kids have got to be terrified. I'm very concerned that they're getting put into -- are they getting put in the right homes, where they're getting the right counseling, and do we have people who are trained to specialize in mind control? I know they have them in the military. But I don't know what they're doing (in Texas). I'm hoping for the best."

Allen added that most of the people taken from the compound "will want to go back. And this is what's so amazing about it. They're so abused. They're literally slaves, yet they just can't wait to get back. I know many cases where they were -- the children have been on the outside, the females for several years, and the day they turn 18, they go right back to the cult."

Allen says it took her almost 20 years to overcome what she was taught and went through in a polygamist sect, she says, including "going ... back and forth. I escaped when I was 16, then I just kept going back. I just couldn't find myself in the outside world. Then I went back, I was married. I was a third wife. Then finally, I got out and went to college, and it just clicked one day."
F