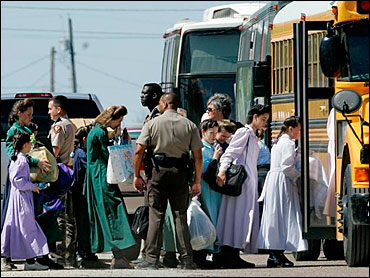 More than 400 children, mostly girls in pioneer dresses, were swept into state custody from a polygamist sect in what authorities described Monday as the largest child-welfare operation in Texas history.

The dayslong raid on the sprawling compound built by now-jailed polygamist leader Warren Jeffs was sparked by a 16-year-old girl's call to authorities that she was being abused and that girls as young as 14 and 15 were being forced into marriages with much older men.

Dressed in home-sewn, ankle-length dresses with their hair pinned up in braids, some 133 women left the Yearning for Zion Ranch of their own volition along with the children.

State troopers were holding an unknown number of men in the compound until investigators finished executing a house-to-house search of the 1,700-acre property, which includes a medical facility, numerous large housing units and an 80-foot white limestone temple that rises discordantly out of the brown scrub.

"In my opinion, this is the largest endeavor we've ever been involved in in the state of Texas," said Children's Protective Services spokesman Marleigh Meisner, who said she was also involved in the 1993 siege of the Branch Davidian compound in Waco.

The members of the Fundamentalist Church of Jesus Christ of Latter-Day Saints spent their days raising numerous children, tilling small gardens and doing chores. But at least one former resident says life was not some idyllic replica of 19th-century life.

"Once you go into the compound, you don't ever leave it," said Carolyn Jessop, one of the wives of the alleged leader of the Eldorado complex. Jessop left with her eight children before the sect moved to Texas.

Jessop said the community emphasized self-sufficiency because they believed the apocalypse was near.

Meisner said each child will get an advocate and an attorney but predicted that if they end up permanently separated from their families, the sheltered children would have a tough acclimation to modern life.

Tela Mange, a spokeswoman for the state Department of Public Safety, said the criminal investigation was still under way, and that charges would be filed if investigators determined children were abused.

Still uncertain is the location of the girl whose call initiated the raid. She allegedly had a child at 15, and authorities were looking for documents, family photos or even a family Bible with lists of marriages and children to demonstrate the girl was married to Dale Barlow, 50.

Efforts to locate the girl are hampered because the women and children in custody are related to one another, share similar names or were given different names at different times, reports CBS News correspondent Hari Sreenivasan.

Under Texas law, girls younger than 16 cannot marry, even with parental approval.

The church members were being held at Fort Concho, a 150-year-old fort built to protect frontier settlements, to be interviewed about the 16-year-old girl and whether, in fact, the teenager was among them.

DPS troopers arrested one man on a charge of interfering with the duties of a public servant during the search warrant, but it was not Barlow, Mange said.

"For the most part, residents at the ranch have been cooperative. However, because of some of the diplomatic efforts in regards to the residents, the process of serving the search warrants is taking longer than usual," said DPS spokesman Tom Vinger, who declined to elaborate. "The annex is extremely large and the temple is massive."

Barlow's probation officer, Bill Loader, told The Salt Lake Tribune that he was in Arizona. Phone messages seeking comment from Loader and Barlow were not immediately returned Monday.

Barlow was sentenced to jail last year after pleading no contest to conspiracy to commit sexual conduct with a minor. He was ordered to register as a sex offender for three years while he is on probation.

The Fundamentalist Church of Jesus Christ of Latter Day Saints, headed by Jeffs after his father's death in 2002, broke away from the Mormon church after the latter disavowed polygamy more than a century ago.

The group is concentrated along the Arizona-Utah line but several enclaves have been built elsewhere, including in Texas. Several years ago it paid $700,000 for the Eldorado property, a former exotic animal ranch, and began building the compound as authorities in Arizona and Utah began increasingly scrutinizing the group.

On Monday, a woman who had once been in a similar sect told The Early Show that women are treated like "breeding machines" in the sects.

"(Polygamy is) a life where, as a female, you really don't think for yourself, you're basically told what to do. You really are just a breeding machine to further the agenda of the male patriarchy," said Laurie Allen to anchor Julie Chen. "This is what I experienced."

The compound sits down a narrow paved road and behind a hill that shields it almost entirely from view in Eldorado, a town of fewer than 2,000 surrounded by sheep ranches nearly 200 miles northwest of San Antonio. Only the 80-foot-high white temple can be seen on the horizon.

Jeffs is jailed in Kingman, Ariz., where he awaits trial for four counts each of incest and sexual conduct with a minor stemming from two arranged marriages between teenage girls and their older male relatives.

In November, he was sentenced to two consecutive sentences of five years to life in prison in Utah for being an accomplice to the rape of a 14-year-old girl who wed her cousin in an arranged marriage in 2001.

The investigation prompted by the girl's call last week was the first in Texas involving the sect.