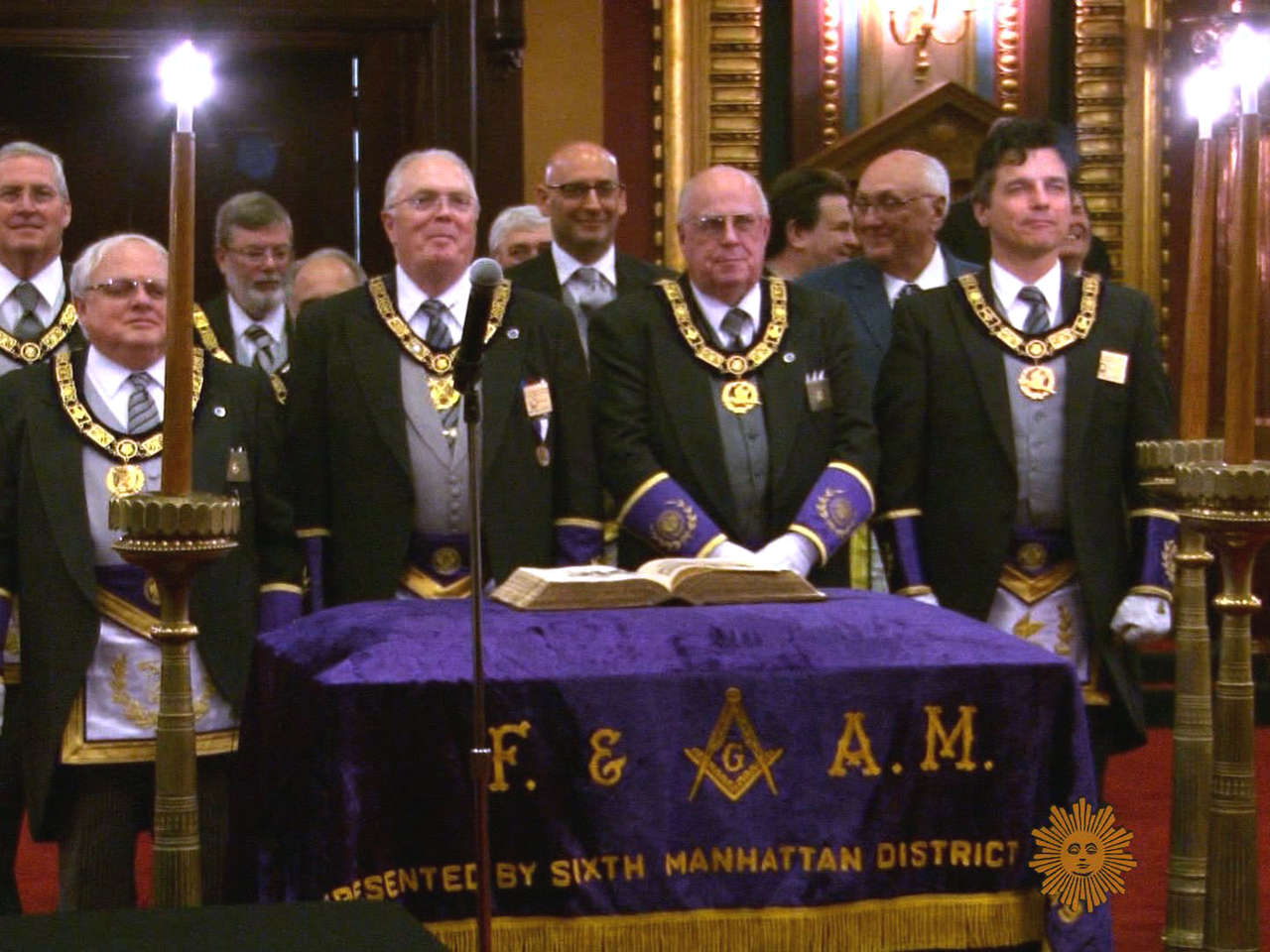 (CBS News) The Square and Compasses are among the traditional tools of stonemasons. They also form the symbol of a group that has been misunderstood and even maligned for many centuries. This morning, Mo Rocca takes us inside.

This story was originally broadcast on December 8, 2013.

It's the world's most well-known secret society. Rich with symbols and ritual, it's the source of legends . . . parodies . . . and conspiracy theories.

Welcome to the world of Freemasonry.

True or false? The Masons are a secret society. "No. That's false," said UCLA history professor Margaret Jacob, one of the world's leading experts on Freemasonry.

True or false? Freemasonry is a religion. No, said Jacob.

True or false? Masons were behind the American Revolution. "False, false, false," she said.

"Okay, but what about on the dollar bill? The eye and pyramid?" asked Rocca.

"Oh, yeah, the eye, yeah," said Jacob. "Everybody says it's Masonic. In fact, it's commonplace in the 18th century, that particular set of symbols."

True! Freemasons laid the cornerstone of America -- well, at least some of its most iconic structures, like the National Cathedral in Washington and the Statue of Liberty.

If you want to be a Mason, you can petition a local lodge for membership. You'll need to demonstrate good character and belief in some sort of Supreme Being. Oh, and in almost all lodges, it's men only.

Next, you're up for a vote, explains former New York State Grand Master James Sullivan. "The lodge votes to accept you, and then you have your three degrees that you go through."

Once you earn "the third degree" (and yes, that's where the phrase comes from), you can join any number of Masonic off-shoots.

Take Brent Morris. He's a 33rd degree Mason and a historian at the House of the Temple for the Supreme Council of the Scottish Rite of the Southern Jurisdiction. (It's that big building in Washington, D.C.)

"This isn't like the Masonic Vatican, but it's an important building," said Rocca.

"It's an important building, absolutely right," said Morris. "It's one branch of Freemasonry in the United States, and that's our headquarters."

Inside, the temple lodge room is a stunner. And downstairs, you can see the flag that Buzz Aldrin took to the Moon with him.

Now, if tiny hats and small cars are your thing, there are the party animals of Freemasonry, the Shriners.

You may know them better for their 22 childrens' hospitals, where patients don't have to pay a cent -- the Masons are philanthropic. They reportedly donate $2 million to charity every day.

Freemasonry began in medieval Europe as a guild for stonemasons, but lived on as a social organization. The first grand lodge was created in London in 1717. "Now there are many men in these lodges that are not associated with a trade organization; they're 'gentleman Masons,'" said Morris. "They're not stonecutters."

A modern fraternity had been created.

It wasn't long afterward that those conspiracy theories began.

"All these men with different neighborhoods, different professions meeting in the cafe, breaking bread together, doing rituals -- what could this be?" said UCLA professor Jacob. "So the response on the part of the authorities was, Oh my God, this is a conspiracy!"

And so in 1738 Pope Clement XII issued the Catholic Church's first decree against Freemasonry -- and it still applies today.

In the U.S., Freemasonry flourished until its secrecy made it the object of suspicion here, spawning America's first third party, the Anti-Masonic Party.

It elected eight Congressmen, but lost the 1828 presidential election to Andrew Jackson -- a proud Mason.

Among the members today: African-Americans, formerly relegated to a separate, black-only branch of Freemasonry.

And then there are members like those in Colonial Lodge No. 1821 of Washington, D.C. Most of them are in their twenties, and some were attracted to Freemasonry by Dan Brown novels and movies like "National Treasure."

"Who here was sort of drawn by the mystery?" Rocca asked a group of young Masons.

"I think all of us," they replied.

"I think it's a combination of history [and] tradition," said one.

Another said it was the allure of ritual: "I mean, that's the reason people join Freemasonry and not the Rotarians."

So what about those secrets?

"What would happen if I found out the secret handshake and I weren't a Mason?" Rocca asked. "You wouldn't have to kill me?"

Also a big secret: the meetings. No non-Masons, or cameras, are allowed. But St. John's Lodge No. 1 of New York agreed to give us a glimpse of one.

For meetings Masons dress up in their Sunday bests and -- just like the original stonecutters -- wear aprons.

At the center of any lodge room is an altar.

"All the activities of the lodge take place about the altar," said Piers Vaughan, the former Lodge Master of St. John's Lodge No. 1.

"Now, would people talk about religion here in a meeting?" Rocca asked.

"Absolutely not," said Vaughan. "There are certain subjects which are prevented from discussing within the Lodge. And religion is one. Politics is another."

And then there are the ceremonies. Each one teaches a moral lesson related to the legend of one Hiram Abiff, the architect of King Solomon's temple. They can be a little unusual, as pointed out in a recruitment video:

"Even while blindfolded, try to concentrate on what you are asked, what is said to you, and what is happening around you. Everything will be explained to you in later sections of the degree."

"When a candidate comes in through the door, he's blindfolded because, symbolically, he is in a state of darkness," said Vaughan, "because Masonry is all about moving from darkness into Masonic light."

As for what happens after that . . . well, that's a secret. But for members, Freemasonry is about something much simpler.

"I have met a group of men that I enjoy being with," said Morris. "These are people that I go out to dinner with, we socialize together. They're guys I like to hang with. They're my friends."