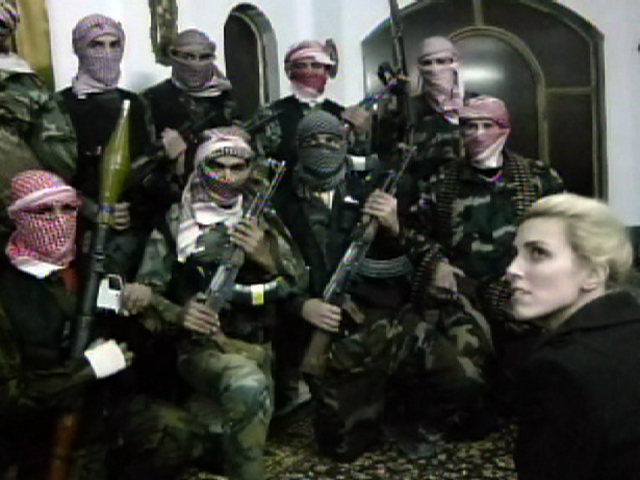 CBS News correspondent Clarissa Ward went undercover in Syria to get a rare look at the revolution. She reports on the growing legions of former soldiers who are joining the rebel movement.

DAMASCUS, Syria - President Obama Tuesday sent Ambassador Robert Ford back to Syria. He was called home six weeks ago because of concerns for his safety.

He's going back, in part, to serve as a witness to Bashar Al-Assad's bloody crackdown on protesters.

There were funerals today in Homs, where as many as 60 people were killed in 24 hours. The Syrian uprising began in March - a revolt against the 40 year dictatorship of Bashar Assad and his father before him.

Assad has tried to conceal his crackdown by banning independent reporting. But CBS News correspondent Clarissa Ward was recently able to slip into Syria to report what's really going on.

The full episode of the CBS Evening News from the March 26, 2015 edition

95-year-olds get married after COVID courtship

Ward was taken on a drive by her guides. It wasn't a long drive, but the guides were taking no chances. Past a government checkpoint, the car twisted along dark back roads outside the capital city of Damascus. After a certain point in the ride, Ward was blindfolded to protect the location of the safe house, where she would meet members of the Free Syrian Army.

They are former Syrian soldiers. They say they refused orders to fire on their own countrymen, and so decided to take up arms against the Assad regime.

The commander spoke off-camera, for his own security. He said, "We are fighting those who have made our children orphans and our wives, widows."

The men claim to have carried out attacks on military targets around the capital - the heard of Assad's power base.

No one know just how large the Free Syrian Army is, but the number of defectors appears to be growing. On video posted by the opposition, former Syrian soldiers are seen pledging to defend the Syrian people against the Assad regime.

"Are you not concerned that if you turned into an armed conflict, civilians might be hurt," Ward asked the Free Syrian Army men.

We did not choose to go to war, the commander said, it was imposed upon us to protect our people and our honor.

The opposition fears the supporters of President Assad - the Shabiha - most, not the Syrian Army. Shabiha means thugs, but it is a play on the word for ghosts. It's a fitting description because the Shabiha do not wear uniforms. They infiltrate protests and they are known for their cruelty.

At the funeral of a 16-year-old boy, who the opposition says was killed by Assad's forces, a man showed Ward a sign. It read, "The Free Syrian Army represents and protects me."

In a smoky apartment, Ward met young activists debating late into the night about the role of the Free Syrian Army.

"I guess it's some kind of necessary right now, to protect those innocent people," one man said. "They're protecting people mainly."

Back at the safe house, Ward asked the soldiers what they were fighting for. One soldier pulled out a photograph of his son. He said he's willing to sacrifice himself so that the next generation of Syrians can be free.

For his part, President Assad describes the opposition as armed gangs seeking to divide Syria.