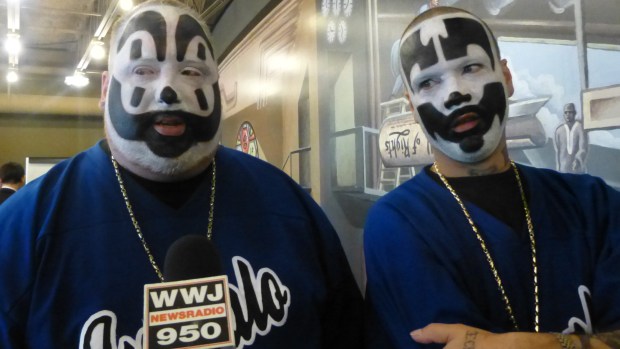 DETROIT - A federal judge has dismissed a lawsuit on behalf of the music group Insane Clown Posse and their fans, known as Juggalos, who said they've been targeted by police after a 2011 FBI report put a gang tag on the fans.

U.S. District Judge Robert Cleland said the U.S. Justice Department can't be blamed for any fallout from the FBI report that labeled the fans as a "loosely organized hybrid gang." It said those who identify as Juggalos have committed assaults and vandalism, and a "small number" of them have engaged in more serious crimes.

The suit contended the fans have been targeted by police because they have jewelry or tattoos with the group's symbol, a man running with a hatchet.

Judge Cleland said the federal government is not responsible for how authorities use the national report on gangs.

The report "does not recommend any particular course of action for local law enforcement to follow, and instead operates as a descriptive, rather than prescriptive, assessment of nationwide gang trends," Cleland said in a 14-page opinion issued last week.

The American Civil Liberties Union of Michigan filed the lawsuit on behalf of the rap-metal duo and their fans, claiming their constitutional rights to free speech and due process were violated by the report.

The ACLU said it will appeal Cleland's decision.

"This is not the end. We'll keep fighting to clear the Juggalo family name," Insane Clown Posse member Joseph Bruce, known as Violent J, said in a statement released by the ACLU. "While it is easy to fear what one does not understand, discrimination and bigotry against any group of people is just plain wrong and un-American."