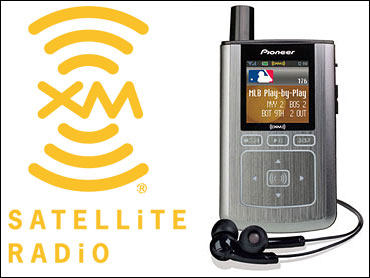 Fans of XM satellite radio with an extra $399 in their pocket have something to cheer about with Pioneer's new Inno portable radio, recorder and digital music player. The tiny device (0.6 by 3.7 by 2.2 inches, weighing in at 4.5 ounces) delivers 170 channels of XM radio that you can listen to live or record on the unit's 1 gigabyte of flash memory. You can also use that memory to store (MP3 or WMA) music copied from your CDs or purchased from Napster or other Windows-based music stores. The Samsung Helix is an identical product.

XM loaned me a device to try out, and I tested it from my house in Silicon Valley while taking a walk in my neighborhood, listening in my car via an optional car kit and listening from a hotel room in Williams, Calif., a small town about 100 miles north of San Francisco. When I picked up a signal inside my house, I assumed I was connecting to one of XM's urban terrestrial repeaters, since I didn't have a clear view of the sky to pick up a satellite signal. But I'm writing this column from a motel room in a relatively remote area of Northern California and, to my astonishment, I'm not missing a beat. The unit has a very small "stub" antenna. For an extra $39.99 you can purchase a set of headphones with a built-in antenna. Flamboyant geeks will be disappointed to learn the antenna doesn't look like a miniature dish receiver — the antenna is subtly hidden inside the headband.

The device comes with a remote control, though I rarely used it, since the device was mostly either in my hand or in my car at arm's length. The bright color screen is easy to read, and the four buttons (plus four arrows) on the front of the Inno make it very simple to operate. A mode button switches between live XM radio and recorded music. The large XM button in the middle of the unit serves as the main control mechanism. Pressing the right arrow takes you to your list of favorite stations. Press it again and you get into stations by category: Rock, Urban, Jazz & Blues, Lifestyle, Dance, Latin, World, Classical, Kids, News, Sports, Comedy, Talk & Entertainment, Special Events, Travel & Weather, Decades, Country, Hits and Christian. At any time, you can press the XM button for a menu of options that includes adding the current station to your list of favorites, recording the program or bookmarking whatever is playing. Bookmarking a song allows you to easily purchase it from Napster if you connect the Inno to a PC.

To record the current song, the channel you're listening to, or schedule a future recording, you press the XM button twice and select an option. This is a great way to capture music without having to bother downloading it on a PC, although you can only listen to it on the Inno — you can't copy it to other devices.

Titles of recorded songs are displayed on your screen for playback and recorded music is accessed in the same mode as your own MP3 files. You can fast forward, rewind or skip ahead to the next song. You can also organize recorded music into a playlist. Recorded content will remain on the device as long as you're an active XM subscriber. Recording companies have not been happy with this feature and have been fighting XM over the issue of whether the over-the-air royalties that XM pays covers this feature. XM says it's like an old-fashioned radio with a built-in tape deck, but the recording industry doesn't quite buy that argument.

The interface on the device is arguably as intuitive as an Apple iPod — which is saying a lot, especially considering that the Inno does a lot more than an iPod.

When used as a portable handheld device, the Inno's controls and display are set up for use in a vertical position, but when you dock the Inno in the home or car cradle, the orientation of the screen and controls cleverly switch 90 degrees so that it works correctly while on its side.

The $70 car kit includes an external magnetic mount antenna, a cigarette lighter adapter, a mounting bracket that attaches to a vent on the dashboard and a cassette adapter for listening through your car stereo. The Inno itself has a built-in FM transmitter so you can listen through your car radio — but, as has been my experience with similar adapters, I had trouble getting a clear signal in an urban area with lots of FM stations.

The device does have some drawbacks. In addition to the high purchase price, like all satellite radio receivers, you have to pay a monthly fee ($12.95) to listen to XM radio, and personally I wish there was more than just 1 gigabyte of storage — or a way to add additional memory. Also, even though you can set favorite stations, you access them via a menu; there are no pre-set buttons, which would make it safer when using it while driving. And one more thing: I can't use it to listen to my favorite news network.