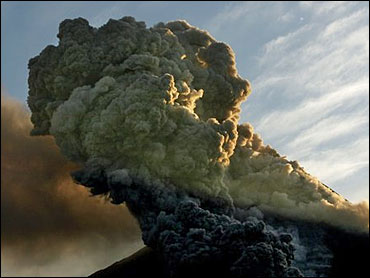 The sky went black, and a thunder-like roar filled the air. Some witnesses remember hearing one or two loud explosions. Few had time to see what Mount Merapi was bringing down upon them.

Within seconds, a massive cloud of searing gas, volcanic debris and rocks had scythed into the village, incinerating everything in its path and killing 60 people, many of them attending a wedding.

As Indonesia's Merapi again threatens to send deadly clouds avalanching from its fiery crater, survivors of its last eruption in 1994 told of its horrors Tuesday, and urged people resisting evacuation to immediately move away from the danger zone.

"The trees caught fire and everything fell down," said Maryoto, who sustained massive burns to his face and body.

"I was aware of what was happening, but couldn't feel anything. It was so hot."

Activity at Merapi has been picking up for weeks, but over the weekend it began spitting out searing hot clouds of gas and rock, known as pyroclastic flows, for the first time.

The flows are made up of a lower layer of coarse rock fragment, that bursts forth like a shotgun blast. The top layer is made up of turbulent ash and volcanic gas. They move together at speeds of between 50 to 100 miles per hour and reach temperatures of up to 1,500 degrees Fahrenheit.

Like most of the victims, Maryoto, 50, was attending a wedding at a house in Turgo village when the flow struck. He was in the kitchen and was trapped under one of its walls.

Maryoto lost nine members of his family, including his younger brother.

The heat was so intense, both his ears and many of his fingers and toes melted.

His wife, Kasiyem, was selling vegetables in the market when the volcano erupted and was unharmed. When it was finally safe to return home, she saw bodies that were "black, scorched, just like pieces of coal," she said.

The pair now live with 120 other families who survived the disaster in a cul-de-sac built especially for them by the government. It lies 2 1/2 miles below their old village, far enough away from the peak to be considered safe.

Turgo has since been repopulated, but has been off limits since Saturday, when the government ordered the mandatory evacuation of its new inhabitants along with some 5,000 other people closest to the crater.

Scientists monitoring Merapi say the current activity will not result in a massive horizontal explosion, but warn that villagers living high on its slopes are again at risk of pyroclastic flows.

Some are refusing to come down, citing mystical beliefs that spirits watch over the volcano and will tell them before any danger.

"You can buy possessions, but you can't replace lives," said Kasiyem. "They should come down."

Villagers interviewed Tuesday said the mountain had not been showing any sign of increased activity before the eruption on the morning of Nov. 22, 1994, and they had received no warnings from the government's volcanology center.

The sight of more clouds on the mountain, known locally as "shaggy sheep clouds" because they resemble tightly curled balls of wool as they roll down the slopes, has stirred up bad memories for many.

"My friends said come and look at them," said Poniyem, who lost her 3 1/2-year-old boy in the disaster and suffered burns to her legs, hands and back. "I said to them no way, and stayed in the house."