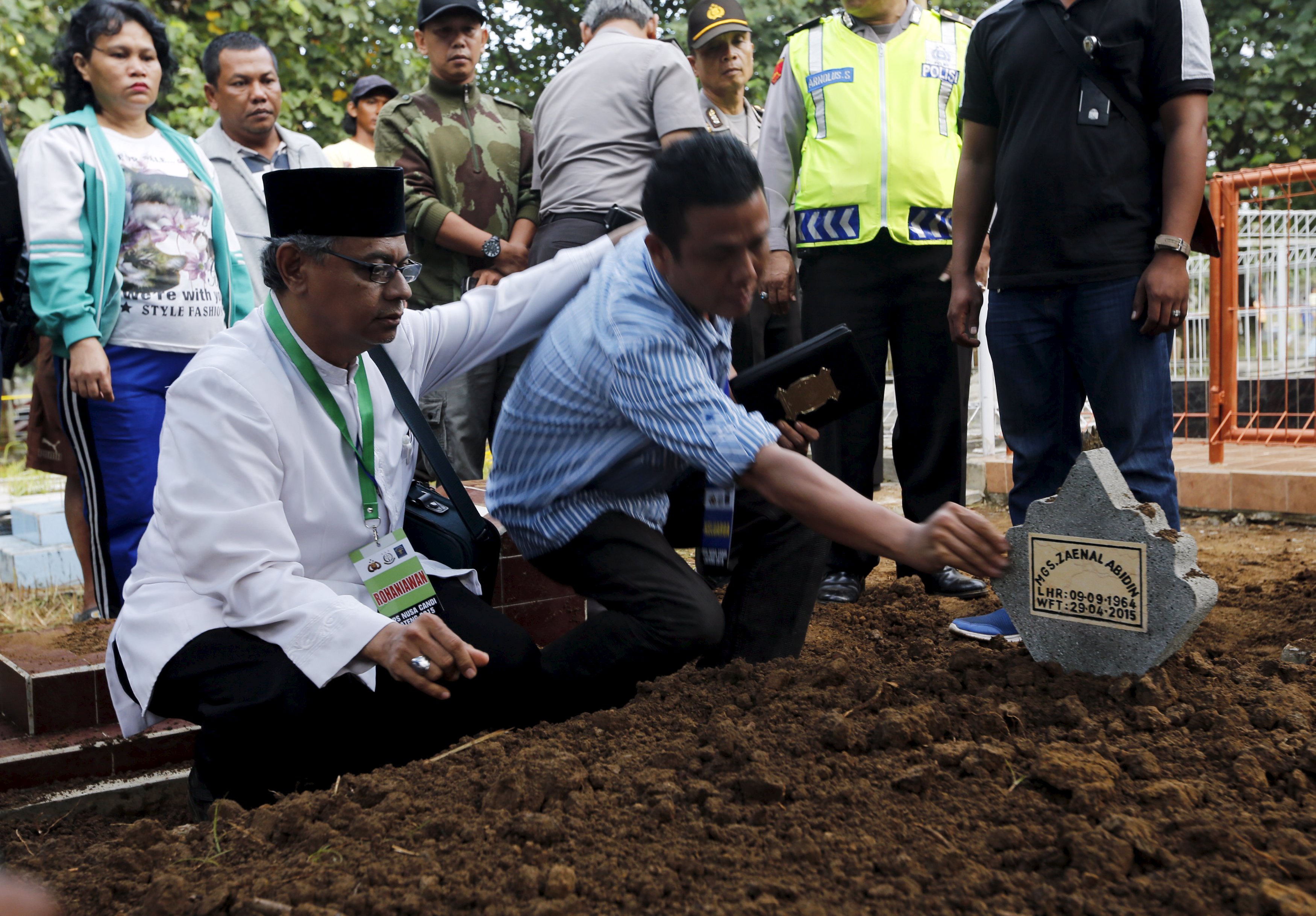 CILACAP, Indonesia -- Indonesia brushed aside last-minute appeals and executed eight people convicted of drug smuggling on Wednesday, although a Philippine woman was granted a stay of execution.

Attorney General Muhammad Prasetyo confirmed at a news conference hours after the deaths had been widely reported that each of the eight had been executed simultaneously at 12:35 a.m. (1735 GMT) by a 13-member firing squad. Medical teams confirmed their deaths three minutes later, he said.

"The executions have been successfully implemented, perfectly," Prasetyo said. "All worked, no misses," he said of the deaths of two Australians, four Nigerians, a Brazilian and an Indonesian man.

Prasetyo early announced that Mary Jane Fiesta Veloso had been granted a stay of execution while the Philippines investigates her case.

Australian Prime Minister Tony Abbott announced that Australia will withdraw its ambassador from Jakarta in response to the executions of two Australians, Myuran Sukumaran, 33, and Andrew Chan, 31.

"These executions are both cruel and unnecessary," Abbott told reporters.

He said it was cruel because Chan and Sukumaran had spent a decade in jail before being executed and "unnecessary because both of these young Australians were fully rehabilitated while in prison."

Brazil's President Dilma Rousseff said in a statement the execution of a second Brazilian citizen in Indonesia this year "marks a serious event in the relations between the two countries."

Brazil had asked for a stay of execution for Rodrigo Gularte, 42, on humanitarian grounds because he was schizophrenic.

Prasetyo dismissed concerns that Indonesia had done long-term damage to bilateral relations through the executions.

"It's just a momentary reaction," he said. "What we're doing is carrying out court decisions."

He said that the message was "do not try to smuggle drugs in Indonesia, because we will be harsh and firm against drug-related crimes."

Michael Chan, brother of Andrew Chan, who became a Christian pastor during his decade in prison and married an Indonesian woman on Monday, reacted with anger.

"I have just lost a courageous brother to a flawed Indonesian legal system. I miss you already RIP my Little Brother," he tweeted.

In a statement, the Sukumaran and Chan families, said: "In the 10 years since they were arrested, they did all they could to make amends, helping many others. They asked for mercy, but there was none."

Mary Jane Veloso's mother, Celia, said that the stay of execution for her daughter was nothing short of a miracle.

Presidential spokesman Herminio Coloma thanked Indonesian President Joko "Jokowi" Widodo for giving due consideration to the appeal of his Philippine counterpart, Benigno Aquino III. He said the reprieve provides an opportunity for her testimony to expose how a criminal syndicate duped her into being an unwitting accomplice and courier in drug trafficking.

There were cheers from the more than 250 Veloso supporters who held a candlelight vigil outside the Indonesian Embassy in Manila.

Veloso, 30, was arrested in 2010 at the airport in the central Indonesian city of Yogyakarta, where officials discovered about 5.5 pounds of heroin hidden in her luggage.

Prasetyo said Veloso was granted a stay of execution because her alleged boss has been arrested in the Philippines, and the authorities there requested Indonesian assistance in pursuing the case.

"This delay did not cancel the execution. We just want to give a chance in relation with the legal process in the Philippines," he said.

The woman who allegedly recruited Veloso to work in Kuala Lumpur, Maria Kristina Sergio, surrendered to police in the Philippines on Monday, Deputy Police Director-General Leonardo A. Espina said.

The wishes of two other Nigerians -- Sylvester Obiekwe Nwolise and Okwudili Oyatanze -- as well as those of Gularte, the Brazilian, have yet to be made public.

Originally, 10 inmates were to be executed, but Frenchman Serge Atlaoui was excluded because he still had an outstanding court appeal against Jokowi's rejection of his clemency application.

The government says Atlaoui will face a firing squad alone if his appeal is rejected by the Administrative Court.

Jokowi's predecessor, Susilo Bambang Yudhoyono, canceled a trip to Australia this week because of growing anger over the executions. He was to give a speech at the University of Western Australian in the city of Perth on Friday on Australia's diplomatic and economic relationships with its Asia-Pacific neighbors, including Indonesia.