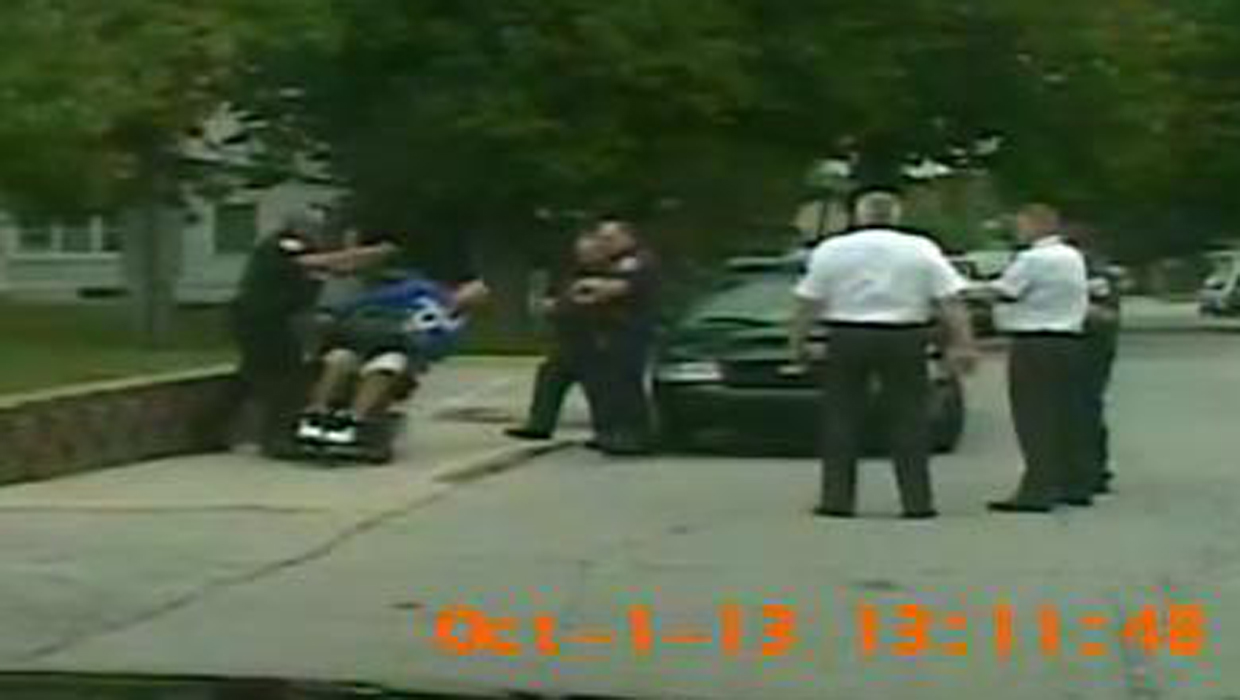 LAFAYETTE, Ind. - Dash cam video has been released of an incident last year where an Indiana police lieutenant pushed a man in a motorized wheelchair to the ground for running over his foot, reports CBS affiliate WLFI. The lieutenant has since been demoted.

The footage was released nine months after the altercation between Lafayette police Lt. Tom Davidson and 25-year-old Nicholas Kincade on Oct. 1, 2013, according to the station.

The video shows Kincade rolling over the lieutenant's foot in his wheelchair; within moments, the officer forcefully shoves Kincade in the upper body, and he falls out of the wheelchair and onto the street.

Davidson tells Kincade, "You did not drive over me.... Now you're going to jail." Kincade replies that he did not see the lieutenant's foot. He was then arrested for battery on a law enforcement officer, according to the station. That case was later dismissed.

It's a climax to a 12-minute video that began when police were called to the Excel Center - a school offering free tuition to adults - after Kincade told school security that he had a gun in his backpack, reports WLFI. The gun claim turned out to be false, though authorities did find a pocketknife in Kincade's backpack. He was given a trespass warning and asked to leave. That's when he ran over Davidson's foot.

"It's clear to us that the whole use of force in this case could have been avoided just by different positioning, by offset positioning, by moving out of the way, by not standing where he was standing," Police Chief Patrick Flannelly said Tuesday.

There is an almost 4-second time span between when Kincade's wheelchair starts to move and when it makes contact with Davidson's foot.

"Police officers cannot put themselves in a position where the subsequent need to use force is created," Flannelly said. "We can't do that."

The station reports that Davidson went back to talk to Kincade after he had been returned to the wheelchair.

"Nick, do you understand why I shoved you off me?" he says in the video. "Because you were driving up on my leg."

"I didn't mean to," Kincade responds.

Flannelly said he and six other members of the command staff unanimously felt Davidson used conduct unbecoming of an officer and an excessive use of force. An internal review of the incident by authorities determined that he should be fired, according to WLFI. On appeal, the five civilians on Lafayette's Civil Service Commission ruled Davidson had not demonstrated excessive use of force and lessened the punishment, demoting Davidson in rank to officer and giving him 30 days of suspension without pay.

"He made his mistake. He's received the punishment. We've spoken," said Flannelly. "The merit board has spoken. The process is done. At this point we move forward."

The station reports a special prosecutor appointed to the case decided Tuesday not to file criminal charges.

Kincade told WLFI on Tuesday that seeing the video made him emotional and he believes Davidson should have been fired.