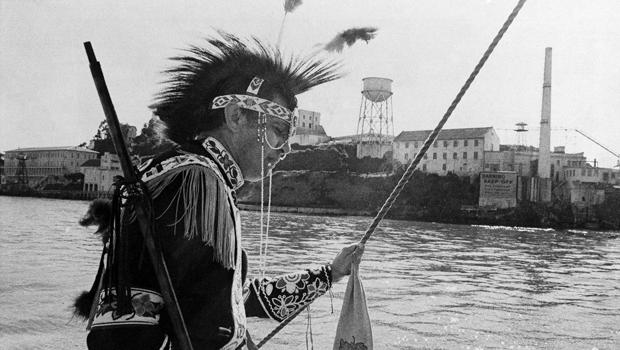 The 1960s comedian Lenny Bruce once wrote that Native Americans' worst mistake when Europeans supposedly discovered America was believing possession really is nine-tenths of the law.

It's now common knowledge that the arrival of European settlers ushered in centuries of violence and misery for America's First Peoples. But when Bruce wrote those words, American mythology hadn't yet accepted that stark reality.

So, it was a wake-up call when, 50 years ago this fall, Native American activists seized the notorious prison island of Alcatraz in San Francisco Bay, which had recently been closed by the government. Their leader, 27-year old Mohawk Richard Oakes, cited an 1868 Indian treaty that gave natives the rights to abandoned federal land. "We invite the United States to acknowledge the justice of our claim," he said.

Oakes and his fellow occupiers demanded that Alcatraz become home to a new Indian university and cultural center. The Indians issued their ownership requests directly to President Richard Nixon, and soon 400 Indians were living on Alcatraz.

Cree folksinger Buffy Sainte-Marie lent her song "Now That the Buffalo's Gone" to the cause. When Marlon Brando and Jane Fonda visited the island, the occupation became a counterculture happening.

As the standoff entered the 19-month mark, Nixon finally ordered a full shutdown of the island's electricity and phone lines. The island's 15 remaining occupiers were physically removed.

Alcatraz didn't become "Indian Land Forever," as the occupiers had hoped. But these brave activists did open America's eyes to the rank poverty, alcoholism, and high infant mortality rate on Native reservations.

Perhaps Indian activist leader Russell Means explained the 1969 occupation best: "People were ashamed to be Indian ... Then there was the spark at Alcatraz, and we took off … We put Indians and Indian rights smack dab in the middle of the public consciousness."

And there it has stayed, ever since.