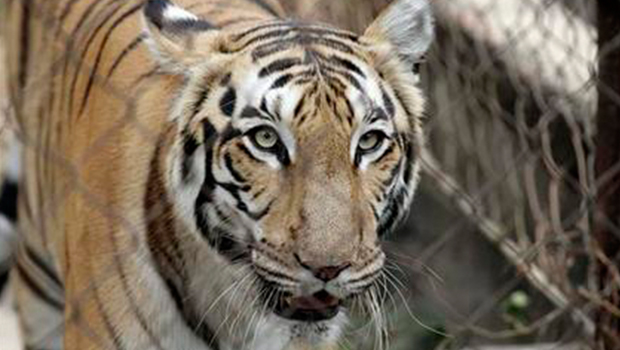 India is scrambling to protect its beleaguered tiger population after several big cats tested positive for a virus common among dogs but deadly to other carnivores, experts said.

In the last year, canine distemper virus has killed at least four tigers and several other animals across northern and eastern India, according to Rajesh Gopal of the government's National Tiger Conservation Authority.

The revelation is bad news for wild tigers - already endangered by rampant poaching and shrinking habitat as India undergoes breakneck development to accommodate the staggering growth of its 1.2 billion people. That same economic development and population growth means more people - and more dogs - are coming even closer to wildlife.

India will now test every tiger carcass it finds for the virus, Gopal said, while authorities also consider a massive campaign to vaccinate dogs against canine distemper.

"We cannot vaccinate every dog, of course. But even 50 percent of dogs in the zones around sanctuaries would help," Gopal said. He did not give details of the plans being considered. There is no vaccine for big cats.

The cases being found across such a huge swath of India, however, suggests the disease could already be running in the wild, experts said, though they agree much more research is needed.

"These are very disturbing finds," said Dr. A.K. Sharma, head scientist at the Indian Veterinary Research Institute, which performed the canine distemper lab tests. "The cases were quite distant from each other, and the latest was an area where there are no dogs. So it appears the virus is spreading."

Since two cubs tested positive in a zoo in the Bihar state capital of Patna a year ago, Sharma and his colleagues have found at least four more cases - a red panda in the northeast state of Manipur, a wild tiger in West Bengal, a zoo lion in Darjeeling and last month a wild tiger in the Dudhwa Tiger reserve in Uttar Pradesh.

"In the last case, forest guards said they saw the animal in a confused state before it died," he said.

Experts said there are likely more undetected cases, since testing for canine distemper has not been routine and few animals that die in the wild are ever found.

Canine distemper virus, a close relative of measles, is associated mostly with domestic dogs though it has infected - and ravaged - other carnivore populations.

It brought the U.S. black-footed ferret to the brink of extinction in the late 1970s. In Tanzania in 1994, an epidemic likely introduced by tourists' dogs wiped out at least a third of the 3,000-strong African lion population in Serengeti National Park.

The possibility of a disease like canine distemper hitting the world's last population of wild Asiatic lions was a major consideration in last year's Indian Supreme Court's decision ordering Gujarat state to safeguard the species by transferring some lions to a second, faraway sanctuary.

While dogs can often recover from the disease, other animals including tigers, lions and leopards suffer fever, seizures and delirium before they die. There is no known cure.

Some experts said it was pointless to try to limit the disease, given how closely millions of Indians live alongside wildlife. Instead, the country should focus on other, proven threats like poaching, prey loss to hunting and human encroachment into forests.

"Thinking we can control this is totally unrealistic. We have to live with it now, and assess whether it's really serious yet," said Ullas Karanth, the Bangalore-based Asian science director of Wildlife Conservation Society. "What South Africa has done, quarantining huge areas and creating disease-free spaces in the wild, is not feasible here."

India is home to more than half of the world's estimated 3,200 tigers. An ongoing tiger census should give an updated count in a year. Despite dozens of tiger reserves in place, their numbers have sunk from an estimated 5,000-7,000 in the 1990s, when their habitat was more than twice as large.

Illegal poaching remains a stubborn and serious danger, with tiger parts fetching high black market prices due to demand driven by traditional Chinese medicine practitioners. Deforestation and urban growth, meanwhile, bring the cats ever-closer to human settlements - and into conflict with villagers who will hunt any wild animals near their communities or livestock.

That tigers may now face another threat from disease is alarming, said Thopsie Gopal, an Indian expert in animal emerging infectious diseases who was not involved in the test cases.

"This is a serious situation," said Thopsie Gopal, who has no relation to Rajesh Gopal. "Maybe tigers are eating infected dogs, or maybe it is spreading in the wild."

Indian experts also want to search living tigers for natural antibodies that could be used in creating a vaccine. But there are obvious challenges in capturing the reclusive and dangerous nighttime predators for blood tests.

"It would take a lot of funding and a lot of manpower," Sharma said. "We'll see if the government agrees."