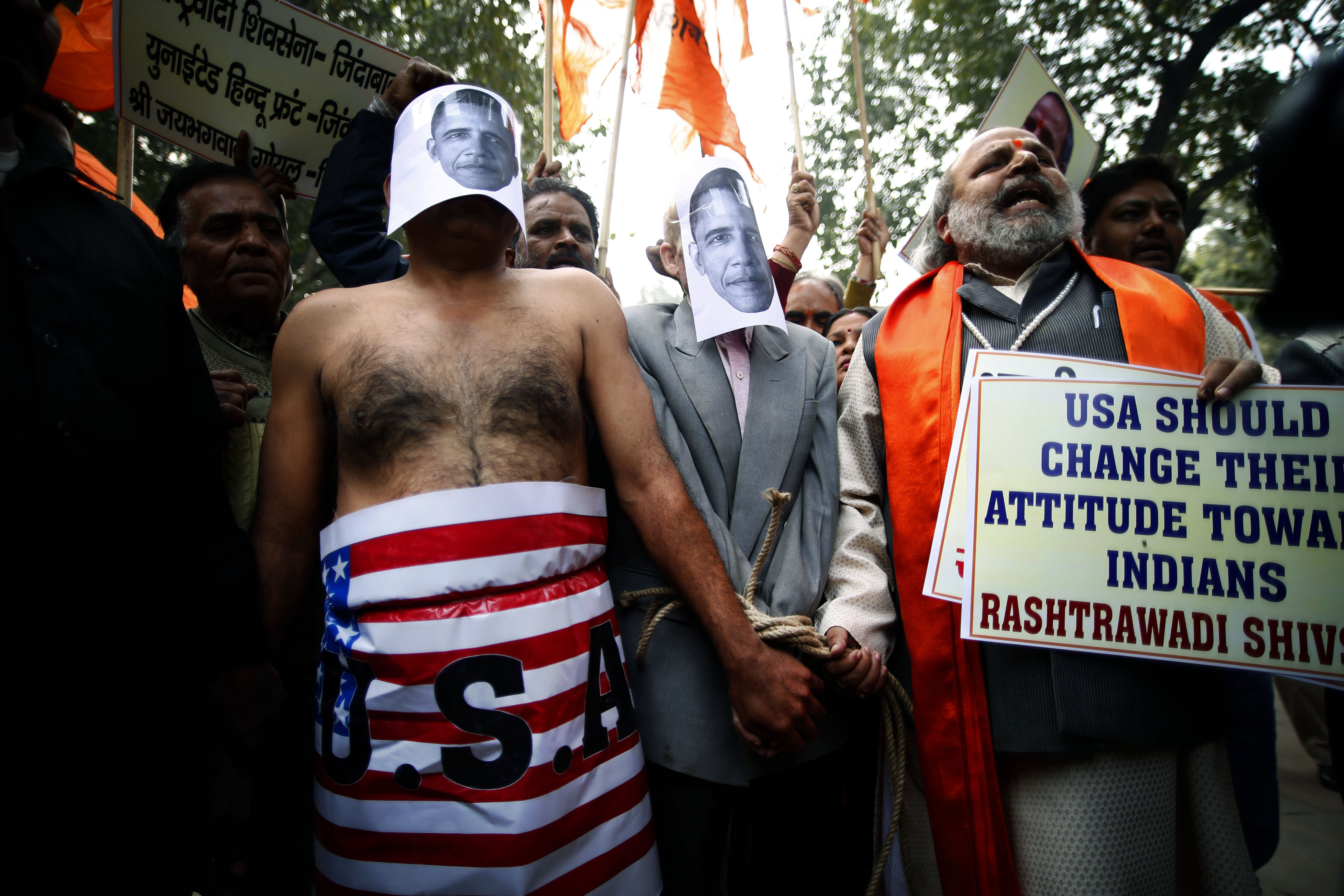 NEW DELHI -- An Indian diplomat said U.S. authorities subjected her to a strip search, cavity search and DNA swabbing following her arrest on visa charges in New York City, despite her "incessant assertions of immunity."

Devyani Khobragade, India's deputy consul general in New York, was arrested Thursday outside of her daughter's Manhattan school on charges that she lied on a visa application about how much she paid her housekeeper, an Indian national.

Prosecutors say the maid received less than $3 per hour for her work.

CBS News correspondent Margaret Brennan told “CBS This Morning” that U.S. marshals strip searched her in jail, which they say is routine procedure for someone accused of a felony. The marshals said they were not told to give Khobragade any privileged treatment.

Khobragade’s father, Ttam Khobragade, was outraged, saying Tuesday that his daughter had “not done anything to be treated like that. What was done was absolutely atrocious.”

The case has sparked widespread outrage in India and infuriated the New Delhi government, which revoked privileges for U.S. diplomats to protest the woman's treatment. It has cast a pall over India-U.S. relations, which have cooled in recent years despite a 2008 nuclear deal that was hailed as a high point in the nations' ties.

On Wednesday, dozens of people protested outside the U.S. Embassy, saying Khobragade's treatment was an insult to all Indian women.

In an email published in India media on Wednesday, Khobragade said she was treated like a common criminal.

"I broke down many times as the indignities of repeated handcuffing, stripping and cavity searches, swabbing, in a holdup with common criminals and drug addicts were all being imposed upon me despite my incessant assertions of immunity," she wrote.

An Indian official with direct knowledge of the case confirmed to The Associated Press that the email was authentic. The official, who spoke anonymously because of the sensitivity of the case, said India's priority now is to get the woman returned home.

"India's top demand right now is: Return our diplomat," he said, adding that Khobragade, who was released on $250,000 bail, would have to report to police in New York every week.

Khobragade's case has touched a nerve in India, where the fear of public humiliation resonates strongly and heavy-handed treatment by the police is normally reserved for the poor. For an educated, middle-class woman to face public arrest and a strip search is almost unimaginable, except in the most brutal crimes.

Prosecutors say Khobragade claimed on visa application documents she paid her Indian maid $4,500 per month, but that she actually paid her less than $3 per hour. Khobragade has pleaded not guilty and plans to challenge the arrest on grounds of diplomatic immunity.

Brennan reported that a major sticking point between the U.S. and India is whether Khobragade -- a junior diplomat -- should even be considered immune to prosecution.

Marie Harf, U.S. State Department deputy spokeswoman, said Khobragade does not have full diplomatic immunity. Instead, she has consular immunity from the jurisdiction of U.S. courts only with respect to acts performed in the exercise of consular functions.

In New Delhi, the lower house of Parliament had to be temporarily adjourned Wednesday after lawmakers noisily demanded that it adopt a resolution against the United States.

Arun Jaitely, leader of the opposition in the upper house, said the government had to register its "strongest protest" to the U.S. government for the "lack of respect for India." He called for a review of India's relations with the United States, a demand that was vociferously seconded by many lawmakers.

Commerce Minister Anand Sharma said the arrest was a "matter of national outrage." He promised angry lawmakers that the government would make an official statement in Parliament on the incident.

Harf said Tuesday that federal authorities would work on the issue with India.

"We understand that this is a sensitive issue for many in India," she said. "Accordingly, we are looking into the intake procedures surrounding this arrest to ensure that all appropriate procedures were followed and every opportunity for courtesy was extended."

If convicted, Khobragade faces a maximum sentence of 10 years for visa fraud and five years for making a false declaration.