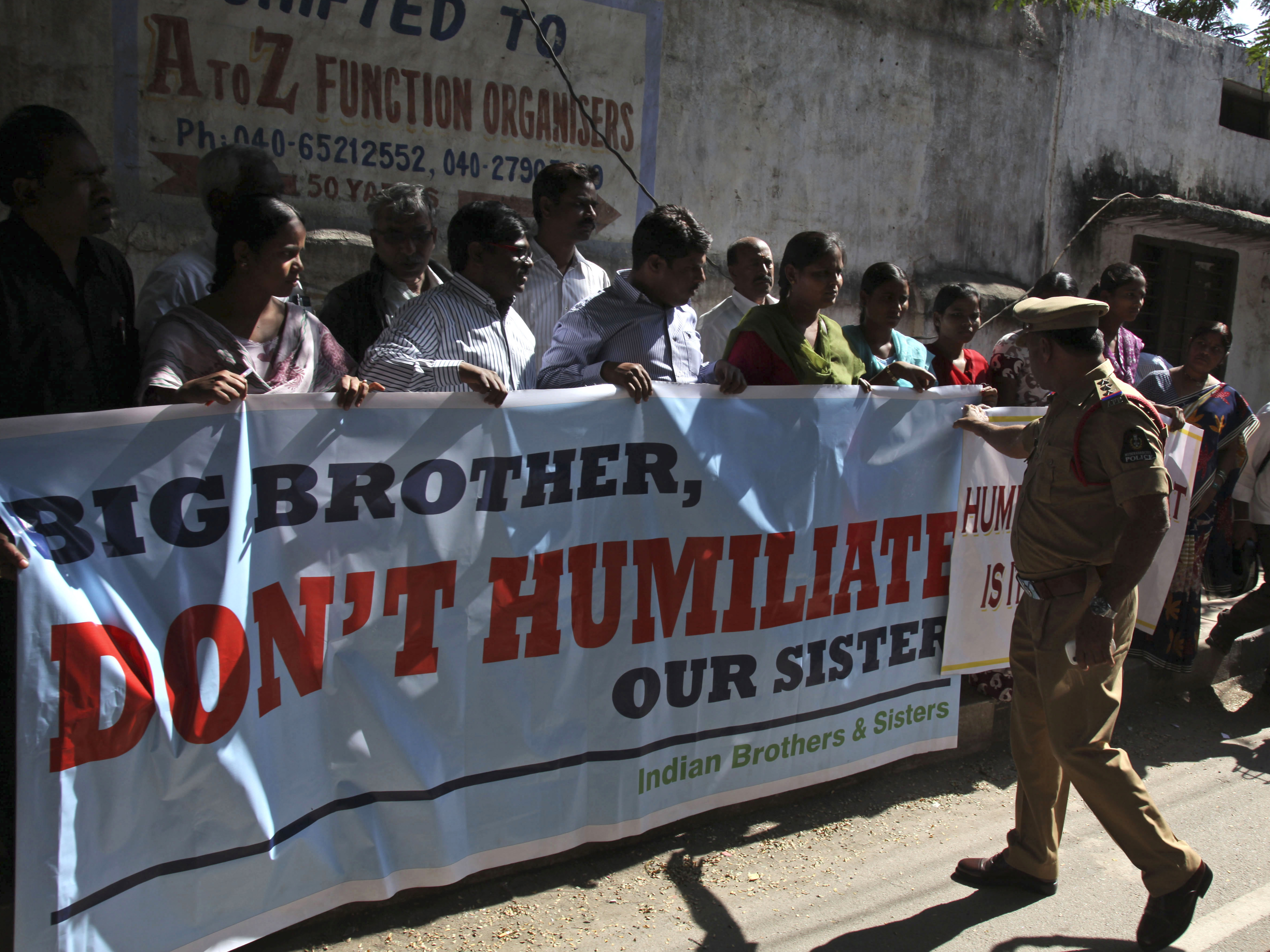 Devyani Khobragade, India's deputy consul general in New York, is accused of submitting false documents to obtain a work visa for her Manhattan housekeeper. Indian officials said she was arrested and handcuffed Thursday as she dropped off her daughter at school, and was kept in a cell with drug addicts before posting $250,000 bail.

In a statement, the U.S. Marshals Service confirmed that Khobragade was subjected to the same booking procedures as other prisoners, including being strip searched - viewed in India as the most disturbing part of the arrest - and locked up with other female defendants.

Earlier Tuesday, her U.S. attorney said he didn't know if she was strip-searched. Federal authorities said they were looking into the arrest.

"We understand that this is a sensitive issue for many in India," said Marie Harf, State Department deputy spokeswoman. "Accordingly, we are looking into the intake procedures surrounding this arrest to ensure that all appropriate procedures were followed and every opportunity for courtesy was extended."

Harf said that federal authorities would work on the issue with India "in the spirit of partnership and cooperation that marks our broad bilateral relationship."

"We certainly don't want this to affect the relationship," she said.

India was ready to retaliate against American diplomats in India by threatening to downgrade privileges and demanding information about how much they pay their Indian household staff, according to the Press Trust of India news agency.

Police also removed the traffic barricades near the U.S. Embassy in New Delhi, a demand by the Indian government in retaliation for Khobragade's treatment, PTI reported. The barriers were a safety measure.

"We got orders to remove the concrete barriers," said Amardeep Sehgal, station house officer of the Chanakyapuri police station, the one nearest the embassy. "They were obstructing traffic on the road." He refused to say who had given the orders.

Calls to the U.S. Embassy were not immediately returned Tuesday.

But Harf said the U.S. had made clear to the India government that it needs to uphold its obligations under the Vienna Conventions on diplomatic and consular relations. She said the U.S. takes the safety and security of its diplomats very seriously.

"It is despicable and barbaric," he said.

Prosecutors in New York say Khobragade, 39, claimed she paid her Indian maid $4,500 per month but actually paid her less than the U.S. minimum wage. In order for diplomats and consular officers to get a visa for their personal employees, known as an A-3 visa, they must show proof that the applicant will receive a fair wage, comparable to employment in the U.S., U.S. Attorney Preet Bharara said in a statement last week.

Federal prosecutors say Khobragade told the housekeeper she would be paid 30,000 rupees per month - about $573, or $3.31 per hour. The woman worked for the family from about November 2012 through June 2013, and said she worked far more than 40 hours per week and was paid even less than 30,000 rupees, prosecutors said.

Khobragade has pleaded not guilty and plans to challenge the arrest on grounds of diplomatic immunity, her lawyer said last week.

If convicted, Khobragade faces a maximum sentence of 10 years for visa fraud and five years for making a false declaration. She was arrested outside of her daughter's Manhattan school.

"We are distressed at the treatment that Dr. Khobragade has received at the hands of U.S. authorities," said her lawyer, Daniel Arshack. He said she should have diplomatic immunity.

Her case quickly became a major story in India, with politicians urging diplomatic retaliation and TV news channels showing the woman in a series of smiling family photos.

That reaction may look outsized in the United States, but the case touches on a string of issues that strike deeply in India, where the fear of public humiliation resonates strongly and heavy-handed treatment by the police is normally reserved for the poor. For an educated, middle-class woman to face public arrest and a strip search is almost unimaginable, except in the most brutal crimes.

Far less serious protocol complaints have become big issues in the past. Standard security checks in the U.S. regularly are front-page news here when they involve visiting Indian dignitaries, who are largely exempt from friskings while at home.

India's former speaker of Parliament, Somnath Chatterjee, once refused to attend an international meeting in Australia when he wasn't given a guarantee that he would not have to pass through security. Chatterjee said even the possibility of a security screening was "an affront to India."

The treatment and pay of household staff, meanwhile, is largely seen as a family issue, off-limits to the law.

The fallout from the arrest was growing. On Tuesday, Indian political leaders from both the ruling party and the opposition refused to meet with the U.S. congressional delegation in New Delhi. The Indian government said it was "shocked and appalled at the manner in which the diplomat had been humiliated" in the U.S.

Harf said as India's deputy consul general, Khobragade does not have full diplomatic immunity, but rather consular immunity from the jurisdiction of U.S. courts only with respect to acts performed in the exercise of consular functions. She said the State Department had in September notified India in writing of the allegations against Khobragade.

Harf said the department's diplomatic security team followed standard procedures during the arrest. After her arrest, Khobragade was handed over to U.S. marshals for intake and processing, and Harf said she could not comment on Khobragade's treatment at that point, or answer the allegations she was strip-searched. Harf said, however, the State Department was looking into those allegations.

"As a father I feel hurt, our entire family is traumatized," he said.