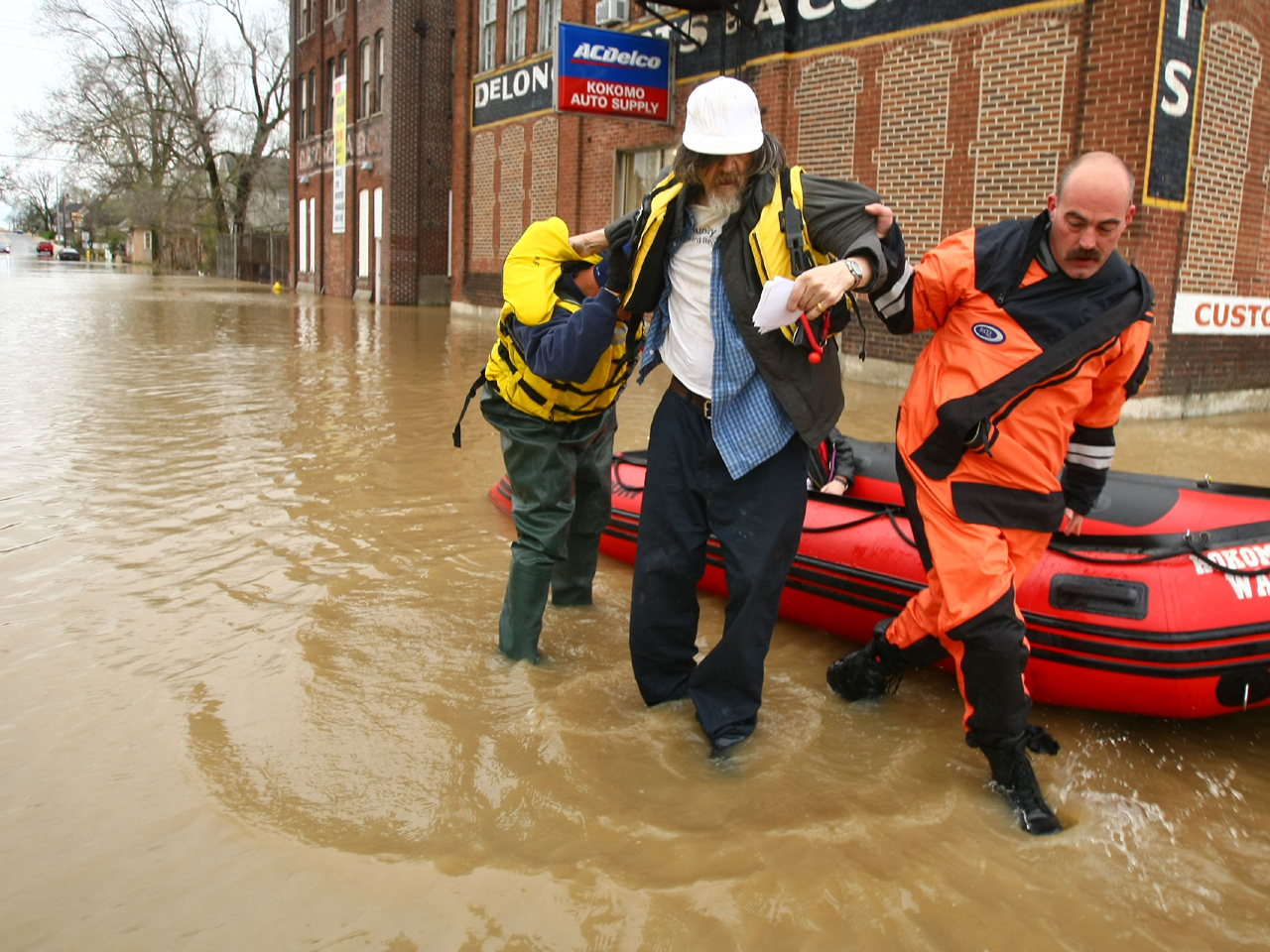 ARCADIA, Ind. A central Indiana man has died after his car was swept away by floodwaters.

Police arrived at the scene at about 7:45 p.m. Friday and were told by a witness that Morgan tried to cross a flooded roadway about 35 miles north of Indianapolis. The vehicle was swept off the road and came to rest about 100 yards downstream, where it was submerged.

The release said water rescue teams pulled Morgan from the car and he was taken to a local hospital where he was pronounced dead.

Bowen stressed that motorists should not drive through high water.

After days of torrential rains, Midwesterners find themselves watching rivers and tributaries rise — a sharp contrast to the region's drought that months earlier had sucked the Mississippi so dry that barge traffic was threatened.

Illinois, Missouri, Michigan, Indiana, Iowa and Wisconsin all had flooding, as dozens of Midwestern rivers were well over their banks after rains that began Wednesday dumped up to 6 inches of new water on already saturated soil.

The trouble appeared to be especially pronounced in Quincy, Ill., where the Mississippi rose a "pretty amazing" nearly 10 feet in 36 hours, National Weather Service hydrologist Mark Fuchs said. One of two bridges there was shut down Friday, and the sewage plant was threatened.

"It's just been skyrocketing," Fuchs added of the Mississippi's swift rise. Downriver from Quincy, a bridge at Louisiana, Mo., was to close at noon Saturday.

Smaller rivers in Illinois seemed to be causing the worst of the flooding. In suburban Chicago, which got up to 7 inches of rain in a 24-hour period ending Thursday, record levels of water were moving through the Des Plaines River past heavily populated western suburbs and into the Illinois River to the south.

As many as 1,500 residents of the northern Illinois city of Marseilles were evacuated Thursday night when fears of a levee breach were heightened as seven barges broke free from a towing vessel and came to rest against a dam on the Illinois River. In the central Illinois town of London Mills, the Spoon River topped a levee and forced the evacuations of half of the 500 residents.

In central Indiana, the National Weather Service said the Wabash River in Tippecanoe County could crest Saturday at 25.5 feet — its highest level in more than a half-century.

Mississippi River flooding wasn't as pronounced. Its water level varies greatly but is typically highest in the spring, so minor flooding is not uncommon. "Flood stage" is a somewhat arbitrary term that the weather service defines as the point when "water surface level begins to create a hazard to lives, property or commerce."

When river levels exceed flood stage by several feet, serious problems can occur. Forecasters now expect it to climb up to 12 feet above flood stage at some spots in Missouri and Illinois.

After the devastating Mississippi River floods of 1993, the government bought out thousands of homes, tore them down and banned development there. New and larger levees have been built, and flood walls reinforced.

Yet communities like Missouri's quaint Clarksville remain at the river's mercy. The community of 442 has no flood wall or levee — a barrier that was opted against because of the cost and the fact residents like the river view. In 2008, the town bought a flood-protection system that allows for a makeshift levee to be built, but the waters have risen too quickly to install it this time. Volunteers scrambled Friday to use gravel, plastic overlay and sandbags to protect the business district and are layering sandbags around threatened homes.

Also unprotected is Grafton, Ill., a tourist town northeast of St. Louis that sits at the convergence of the Mississippi and Illinois rivers. The main thoroughfare leading into town — the Great River Road — was expected to be closed off by midday Saturday, and riverside merchants were clearing out merchandise. Among them was Laurie Wild, who with help of volunteers tried to save her artisan shop's wares.

"It's a mess," said the 51-year-old St. Louis transplant. "We knew what we were getting into when we moved here. It's a beautiful town, and we'll be here after."

The Army Corps of Engineers said Friday most of the locks and dams from the Quad Cities to near St. Louis were closed due to the flood, effectively halting barge and other traffic on that part of the Mississippi. Four Illinois River locks were also shut down.