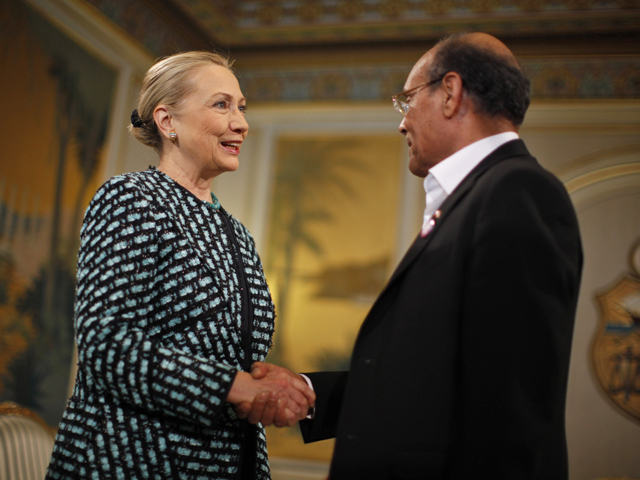 TUNIS, Tunisia - U.S. Secretary of State Hillary Rodham Clinton on Saturday warned of backsliding in the democratic transformations under way in the Mideast and North Africa, and appealed for countries in the region to fulfill the promise of reform offered by the Arab Spring.

In Tunisia, the catalyst for the tumult that engulfed the region last year, Clinton said the continued embrace of reforms would serve as a powerful example elsewhere. Her comments came amid concerns that transitions in Egypt and elsewhere are faltering and at risk of being hijacked by extremists.

Clinton called on Tunisians, particularly the young, to demand that their new leaders stay on the path of liberalization and openness.

"Protecting democracy is the duty of every citizen," Clinton said. "For young people here and across the region, this is a special responsibility. You were fearless on the front lines of the revolution, enduring tear gas and beatings. It takes a different kind of courage to be guardians of your new democracy."

Later, in Algeria, she carried the same message: "The people of the Maghreb are as talented, creative and hard-working as people anywhere in the world. They need and deserve the opportunity to make decisions on behalf of themselves because that is good for the dignity and rights of every individual and it is good for every society."

She spoke of the need for an accountable and effective government, a dynamic private sector and a vibrant civil society.

The Maghreb countries are Algeria, Tunisia, Libya, Mauritania, and Morocco, Clinton's final stop before returning to Washington on Sunday.

Tunisia was the first Arab nation to topple a longtime autocrat when its former president fled the country a year ago in the face of protests.

"Transitions can be derailed and detoured to new autocracies," she told a town hall with Tunisian youth. "The victors of revolutions can become their victims. It is up to (you) to resist the calls of demagogues, to build coalitions, to keep faith in the system even when your candidates lose at the polls."

She recalled her own political loss to now-President Barack Obama in the Democratic primaries in 2008 and how she had rejected calls from her supporters not to quit the race and ultimately accepted his offer to become America's top diplomat.

Tunisia was ruled for 23 years by the autocratic Zine El Abidine Ben Ali who espoused a secular ideology and imposed strict limits on political Islam. Since his ouster in January 2011, there has been a flourishing of Islamic groups and a moderate Islamist political party won elections in October.

In one of the largest demonstrations since tens of thousands marched through the capital demanding the ouster of Tunisia's long-reigning dictator, more than 4,000 members of the country's main trade union marched through Tunis and denounced the Islamist-led government. The demonstration was prompted by incidents at the union's offices around the country, which it blamed on members of Ennahda, the moderate Islamist party that won elections in October.

Clinton said the Islamists, along with other parties, must learn to govern together and uphold respect for rule of law, freedom of speech, religion and assembly, protect women and minorities, and "especially in a region with deep divisions within and between religions, avoid inciting sectarian conflicts that pull societies apart."

"There are those who question whether Islamist politics can really be compatible with democracy," she said. "Well, Tunisia has a chance to answer that question affirmatively and to demonstrate that there is no contradiction. That means not just talking about tolerance and pluralism — it means living it. And it's up to you to hold all your political parties to the same values."

"Protecting democracy is the duty of every citizen," Clinton said. "For young people here and across the region, this is a special responsibility. You were fearless on the front lines of the revolution, enduring tear gas and beatings. It takes a different kind of courage to be guardians of your new democracy."

She urged young people to be patient as reforms take hold, noting that economic progress often takes much longer than political change.

"Impatience is a characteristic of being young, but there is a need to be thoughtful about how we're going to secure the political and economic" gains, Clinton said.

Earlier, in meetings with Tunisian President Moncef Marzouki and Prime Minister Hamadi Jebali, Clinton pledged continuing U.S. support for the country as it navigates the transition.

"We think Tunisia is proceeding in the right direction based on what we're seeing," Clinton said, "but we will continue to have a dialogue that raises questions as they arise."

Clinton was in Tunisia to attend a meeting on Friday of countries backing opponents of Syrian President Bashar Assad.

In Algiers, Clinton noted that Algeria became an independent nation a half-century ago. "Now for the next 50 years, Algeria needs to assume its rightful place as a nation among nations where prosperity, peace and security are available for the people. And the United States wants to be your partner. A partner of your government, a partner of your economy and a partner of your civil society to see these kinds of positive changes occur."

Clinton met with Algerian President Abdelaziz Bouteflika, who has said that elections set for May 10 would pave the way to rebuilding the state to one characterized by good governance and social justice. Mindful of electoral successes of their counterparts in Egypt, Tunisia and Morocco, Islamists in Algeria are predicting major victories during the election. But secular leaders have spoken of an "Algerian exception" to this trend, predicting the Islamists will not do well.

Algeria has not witnessed the mass protests calling for reform that ripped through other North African nations. But there is widespread discontent over the lack of jobs and housing in the oil-rich country. Algeria also has a history of rejecting political victories by Islamists.