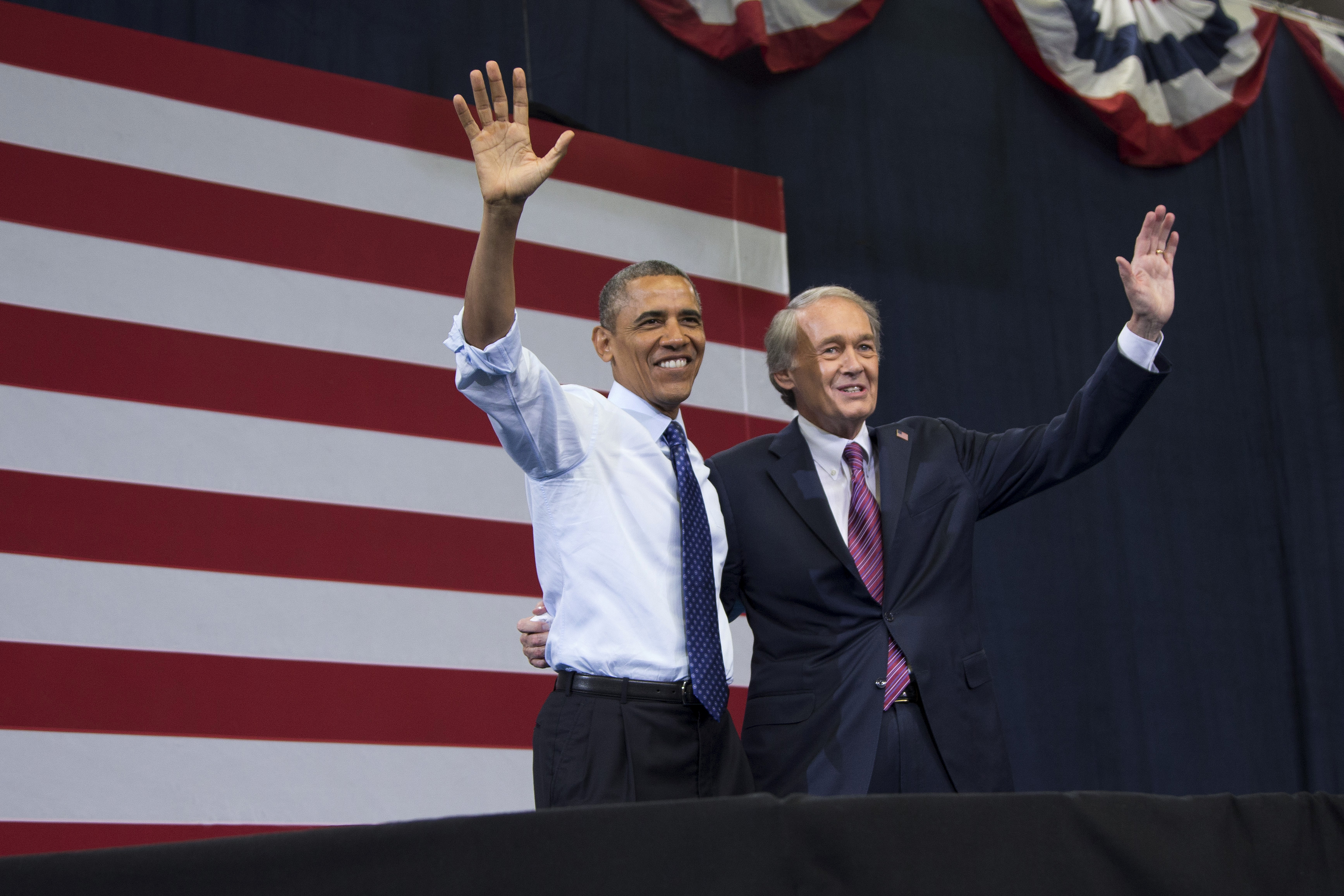 With less than two weeks to go until Massachusetts elects its next senator, President Obama headed to Boston on Wednesday to make a last-minute pitch for longtime Rep. Ed Markey, D-Mass., who is battling it out with Republican Gabriel Gomez to keep the vacant Senate seat in Democratic hands.

Dropping by a campaign rally in Roxbury, Mass., Mr. Obama lauded Markey's credentials as an advocate for the middle-class, and stressed the importance of having "folks in the US Senate willing to stand up for working people just like I have."

Markey and Gomez are competing to replace longtime Sen. John Kerry, D-Mass., who vacated his seat this year after being named Secretary of State. The special election is slated for June 25.

According to a recent poll from Suffolk University, Markey leads Gomez by a seven-point margin, with 48 percent to Gomez's 41 percent. Even in a solidly blue state with a long history of elected Democratic officials, however, Markey's election is not a guarantee: Republican Scott Brown won the 2010 special Senate election to replace the late Sen. Ted Kennedy, D-Mass., tipping the scales of Senate power in a critical loss for Democrats. And the Suffolk poll showed Markey's lead narrowing: A May survey polled Markey at 52 percent and Gomez at 35 percent.

"Ed Markey continues to lead but the margin has dwindled," said David Paleologos, director of the Suffolk University Political Research Center in Boston, in a statement. "Markey's core ballot test number has fallen below 50 percent and recent Obama administration scandals, especially the Associated Press phone records scrutiny, have touched a nerve with likely voters who are holding back or no longer supporting Markey and President Obama with the same intensity."

In their second debate Tuesday night, Gomez attempted to make up yet more ground, touting his support for bills mandating equal pay for women, background checks for guns, and an increase in the minimum wage, while Markey dismissed his positions as tepid and insufficient.

"I think we should increase [the minimum wage] to 10 dollars, but I think the problem is that you think that is what is going to satisfy people, and the reality is that people don't want to just earn 10 dollars per hour," Gomez said, according to the Boston Globe. "They want to have a chance at an American dream."

"That's not the dream," Markey responded, according to the Globe. "That's just the beginning of the dream."

"Gomez is getting more Democratic by the day," said Maurice Cunningham, associate professor of political science at the University of Massachusetts at Boston, in an interview with CBSNews.com, and added that Gomez is also learning from Scott Brown's mistakes in 2012. "In the Brown-Warren race, Brown took a lot of heat for voting against equal pay for women and Gomez has said that's just common sense. He's really taking positions that have been more Democratic."

There are a few key distinctions, however, between both Brown's unsuccessful 2012 re-election bid and his 2010 victory. First of all, Massachusetts Democrats have sworn to remain vigilant in the interest of preventing another 2010 disaster.

"We took that January special election for granted, which was an unforgivable sin," said state Democratic Party chair John Walsh in an interview with CBSNews.com this April. "We let our guard down. That will never happen again. We've learned our lessons from Scott Brown and we are entirely geared up."

Moreover, Cunningham argues, Brown was a tested candidate with a solid base and a record of victory. Brown served as a state legislator for over a decade before his Senate bid; Gomez, a former Navy SEAL who now works in the private equity field, is running his first political campaign.

"Gomez is nowhere near the quality candidate of Scott Brown," he said. "Gomez is still on the training wheels."

Ultimately, though, Cunningham thinks this election is about President Obama as much as it is about the candidates themselves.

"Obama is still very popular here and the economy is better than it has been," he said. "It should line up for Markey to win."

Still, the president recognized on Wednesday that much will come down to turnout on June 25.